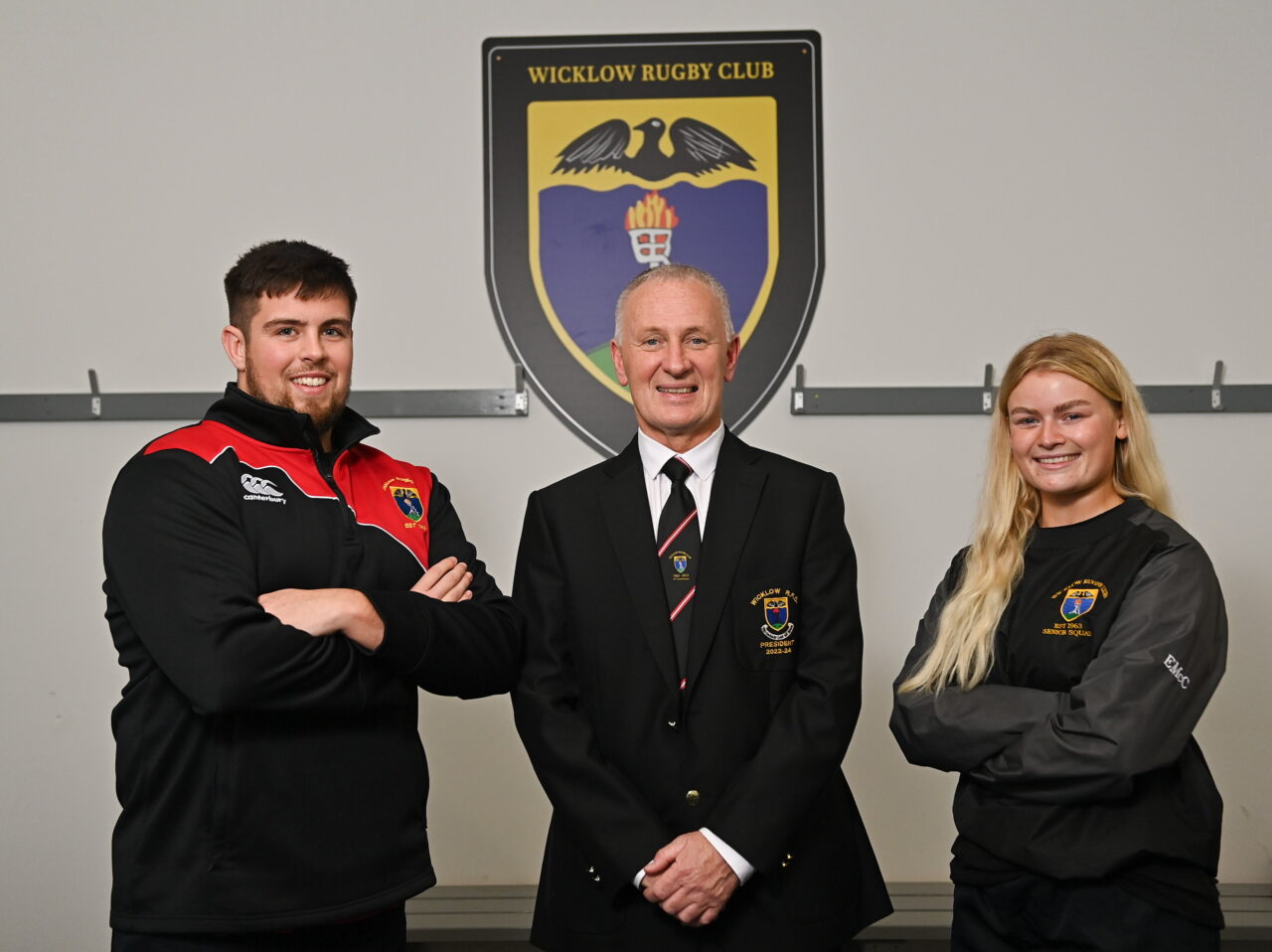 Wicklow is an ambitious rugby club with the structure and support in place to rival that of any in the province.

In 2008, the club completed an ambitious scheme to improve the two remaining pitches and develop a training area quickly followed by a major floodlighting scheme with the aid of funding from the National Lottery.

The latest addition to an impressive list of accomplishments is a new gymnasium of which the whole club can be proud.

“We were able to open up a brand new gym at the club last year,” said Club President Graham Burleigh, in the first of a two-year appointment.

“We spent the recent years raising money to get that done. That has been a huge success. It is a great facility, getting great use from the senior men, senior women and even the older youths teams.

“From a facilities point of view, that has been the greatest addition to the club. There is a bright mezzanine to accommodate team meetings and a modern, well-equipped gym capable of housing 25-30 players at any one point in time.” 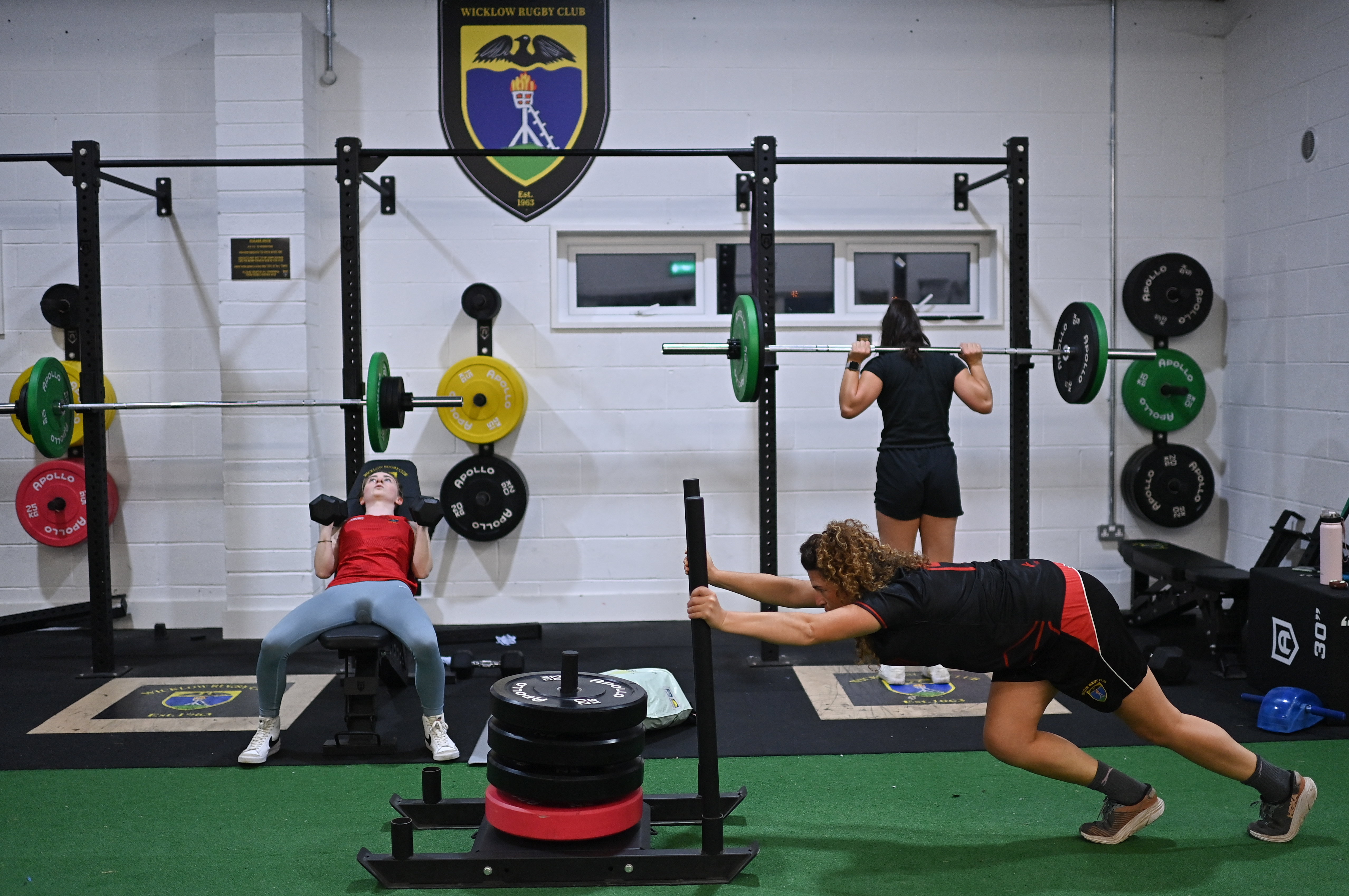 It was built and finished during Covid, for use at the start of the 2021/2022 season. But, due to its stop-start nature, it was officially opened at the end of the season, earlier this year.

Wicklow’s Development Project set out three priorities which would enable the club to move to the next level. They have all been met.

Second, it committed to having “sufficient changing facilities for the teams and referees, allowing up to three simultaneous games of rugby to be played.

Third, it provided “a fully functional gym to enable crucial player development, which will also be offered to the wider Wicklow community.”

The financial and physical work on the ground has been substantial, many hands making light work of a lot of work.

“We have two new training areas, one created from a wasteland, to go beside three full pitches, all of them grass. This is all part of our commitment to maximise the grounds,” shares Graham.

“There are a lot of clubs going down the artificial pitch path. We are keeping an open mind on it for the future.”

There are 165 boys and 97 girls in the youths sections, about 309 in the boys and girls mini section, 22 in the all-inclusive Wicklow Warriors squad, 28 playing for the Veterans and 31 playing Tag Rugby.

“I must say the creation of the Warriors in 2017/2018 has been a huge success and we have some of the senior men and women helping out with them from time-to-time,” he declares.

“It has added something special to the club. For anyone having a bad day, you only have to come to the club and spend an hour with the warriors to lift your spirits.

“Between minis, girls and women, there are about 210 playing members which is really phenomenal. It is our greatest growth area. 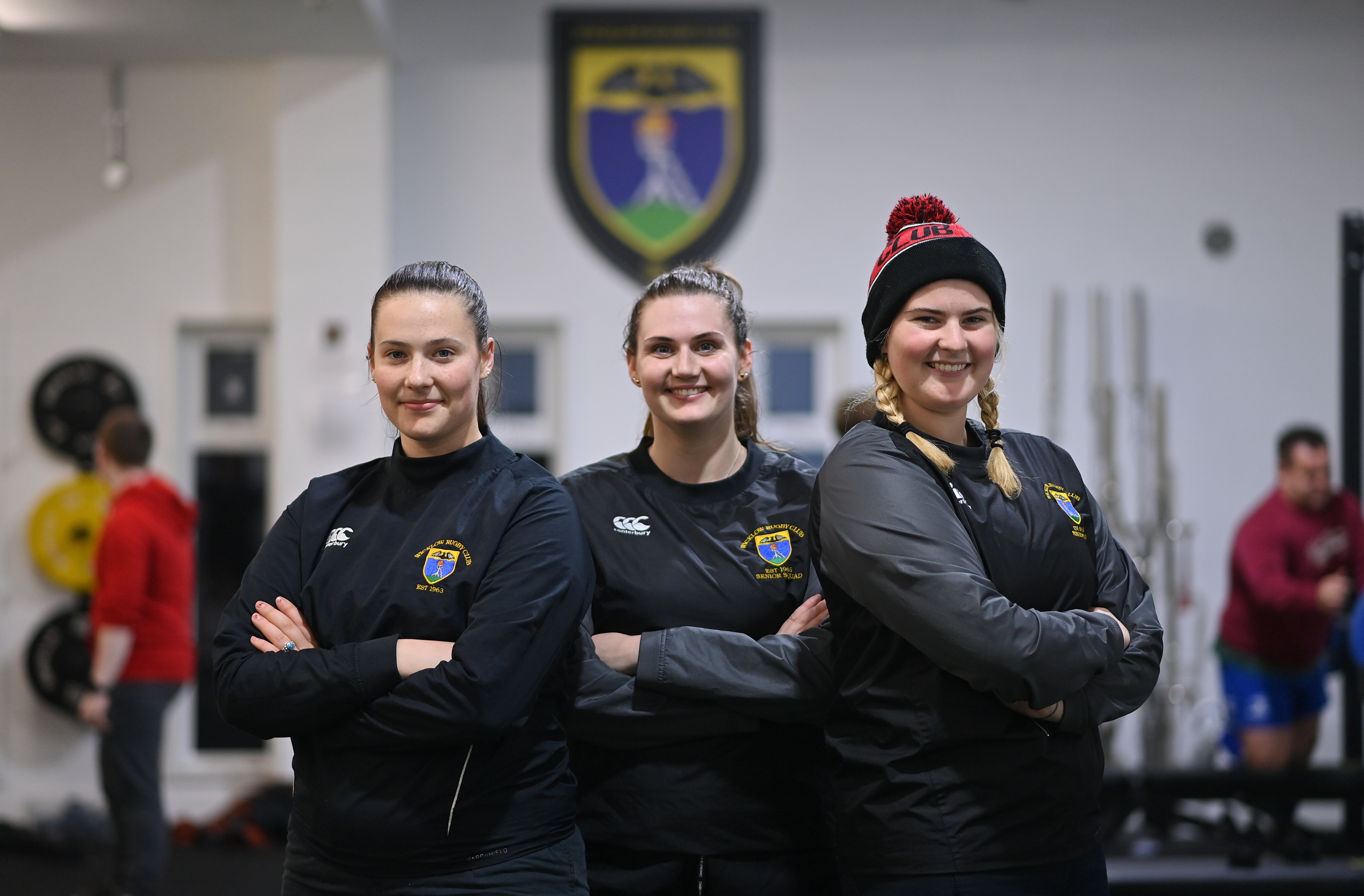 “The majority of our Women have come through the minis and youths section here, a reflection of our commitment to creating the playing pathway right through the club.”

“We have a great set-up for them, beginning with the fun element in minis. It is not just all about rugby. The club takes them on pizza nights and to the cinema on top of learning how to play the game. There is a lovely atmosphere and the structure is there to carry them on that journey to senior All-Ireland League rugby.

“When the girls enjoy what they do, they are more likely to get their friends to come along too. We have also benefited from using the ‘Give It A Try’ Programme, run by the IRFU.

“We are active in 12 local national schools in the area and three secondary schools Colaiste Chill Mhantain (CCM) and East Glendalough, which are mixed, and the all-girls Dominican College, Wicklow.”

The beauty of the Women’s game is that the players are more accessible because they are not professionals.

Ex-Wicklow player Josh van der Flier has never lost touch with his roots, turning up at the summer camp in August and the opening of the new gym. 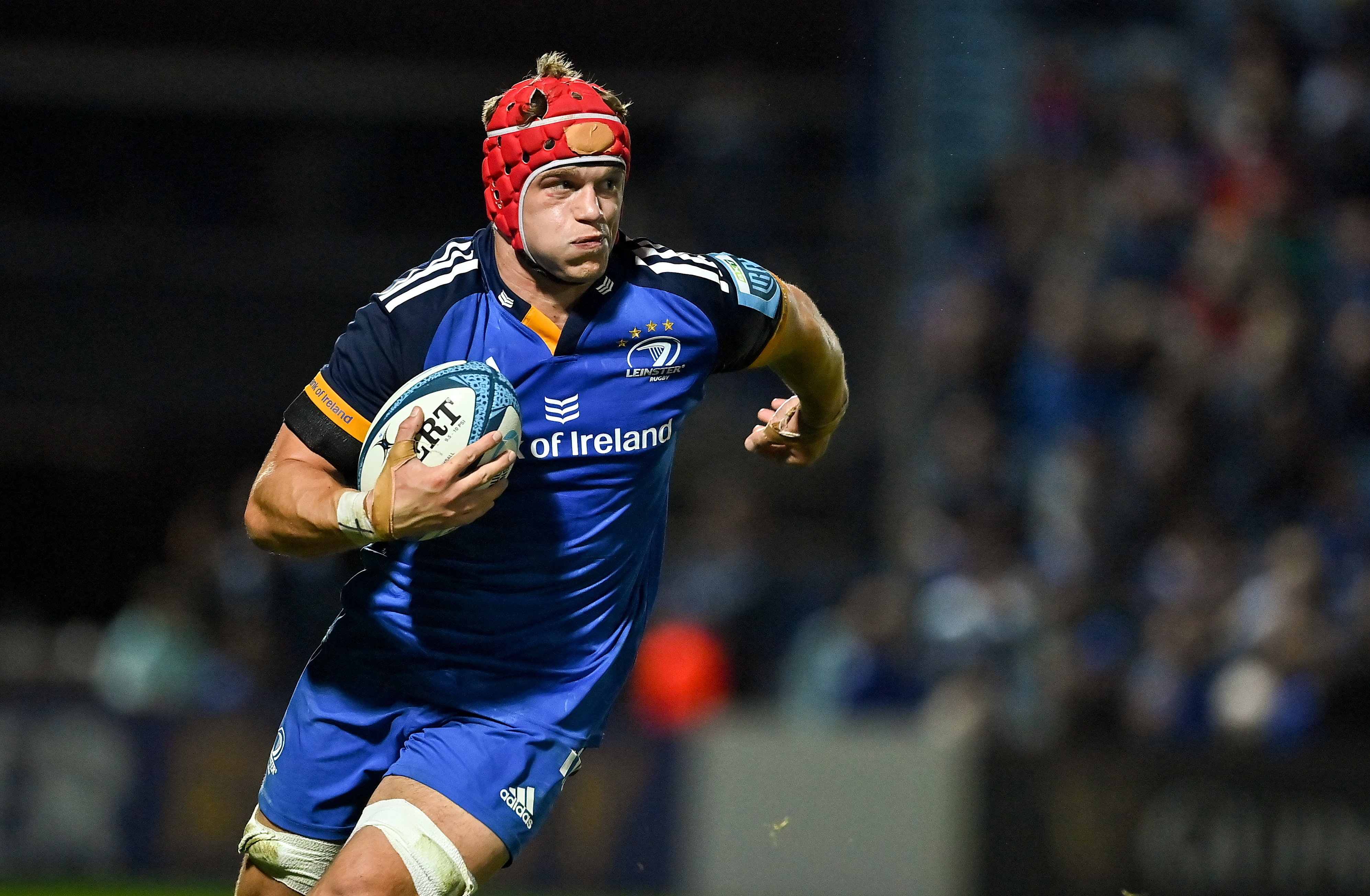 “He is a great friend to the club without a shadow of a doubt. If we ever call on him, he makes himself available whenever possible.”

With the best will in the world, the Leinster and Ireland flanker has many commitments and it is the Women’s representative players that can have the more consistent week-to-week impact.

“At the moment, we have two players who have been with the Ireland 7s, Vicky Kinlan and Ella Roberts. Roisin Stone has been called into a Leinster training camp as well,” says Graham.

These three women are important in pushing the argument that you don’t have to leave Wicklow to achieve your ultimate rugby dream.

They are examples of how the pathway is working, sometimes going back to where it all started for them, to give a dig out at minis.

The feeling of family is made real by the fact there are no less than seven sets of sisters in the Women’s senior squad.  Beth and Ella Roberts, Rachel and Caitlin Griffey, Roisin and Aoibhan Stone, Nicola and Jessica Schmidt, Caoimhe and Orla Molloy, Saoirse and Naoise O’Reilly, Erin and Megan McConnell are one player short of a full fifteen.

The overarching goal is to take Wicklow’s men up into the All-Ireland League where the women are already playing their second season.

The employment of former Springbok scrum-half Dan van Zyl is an indication of their goal to move up from Leinster League Division 1B.

“He has been with us for the last two seasons. It is a reflection of how serious we are about making it into the All-Ireland League. We have also welcomed Dewalt Barnard from Terenure as the forwards’ coach for this season.”

Director of Rugby Jason Watson has been central to the twin-track development of both the men’s and women’s squads.

“Like the women, the bulk of our male adult players come through the system here from boys to men.”

“Jason has played a significant role to ensure that our structure to support rugby in the club is fit for purpose and has been instrumental with the development of a pathway from minis to senior rugby for both boys and girls.

“Under his stewardship, we have seen significant progress on the field of play.”

It all confirms Wicklow as an ambitious club with family values at its’ core.