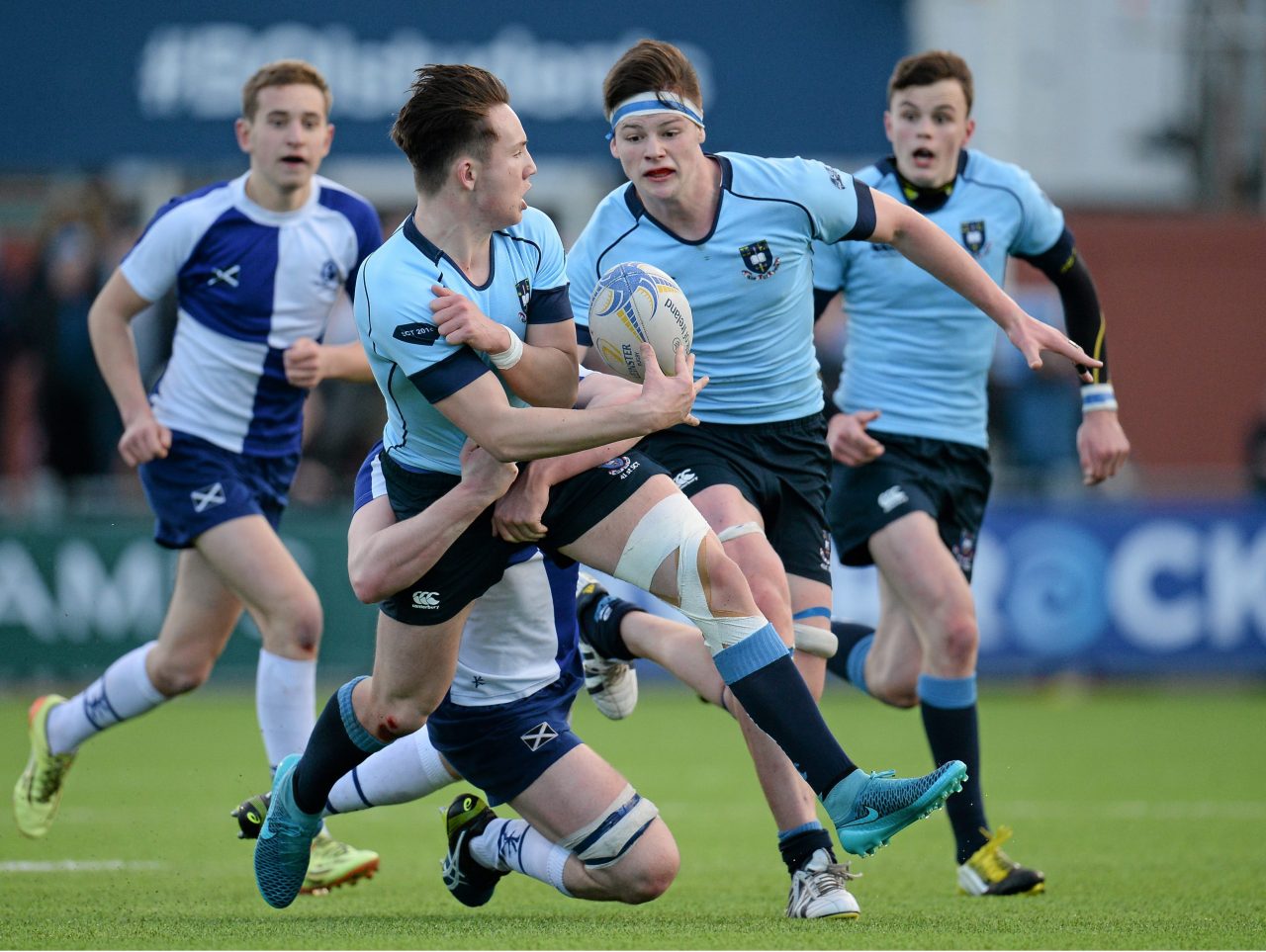 St Michael’s had to cope with the early loss of flanker Oisin Dowling to move on to the Bank of Ireland Leinster Schools Senior Cup quarter-final at Donnybrook on Tuesday.

St Andrew’s lost their influential number eight Mark O’Reilly in the build up to the game and their scrum-half Hugh Black was forced out with illness, forcing a reshuffling of the backline.

This had to be hugely unsettling.

Their immediate remedy was to fly up into the faces of the St Michael’s carriers, flanker Ben Nolke winning a penalty which they could not turn into points from a lineout.

Once Dowling put in a big hit to cause a turnover, St Michael’s played keep ball as they probed left and right to find a hole.

They were met with resolute and organised defence, led by captain Jordan Larmour, Nolke and number eight Zola Henry.

However, St Michael’s got into their patterns to trigger a sequence of phases blending the directness of Scott Penny with the skills of Jack Kelly until wing Jeff O’Loughlin looked to be one catch away from the opening try. 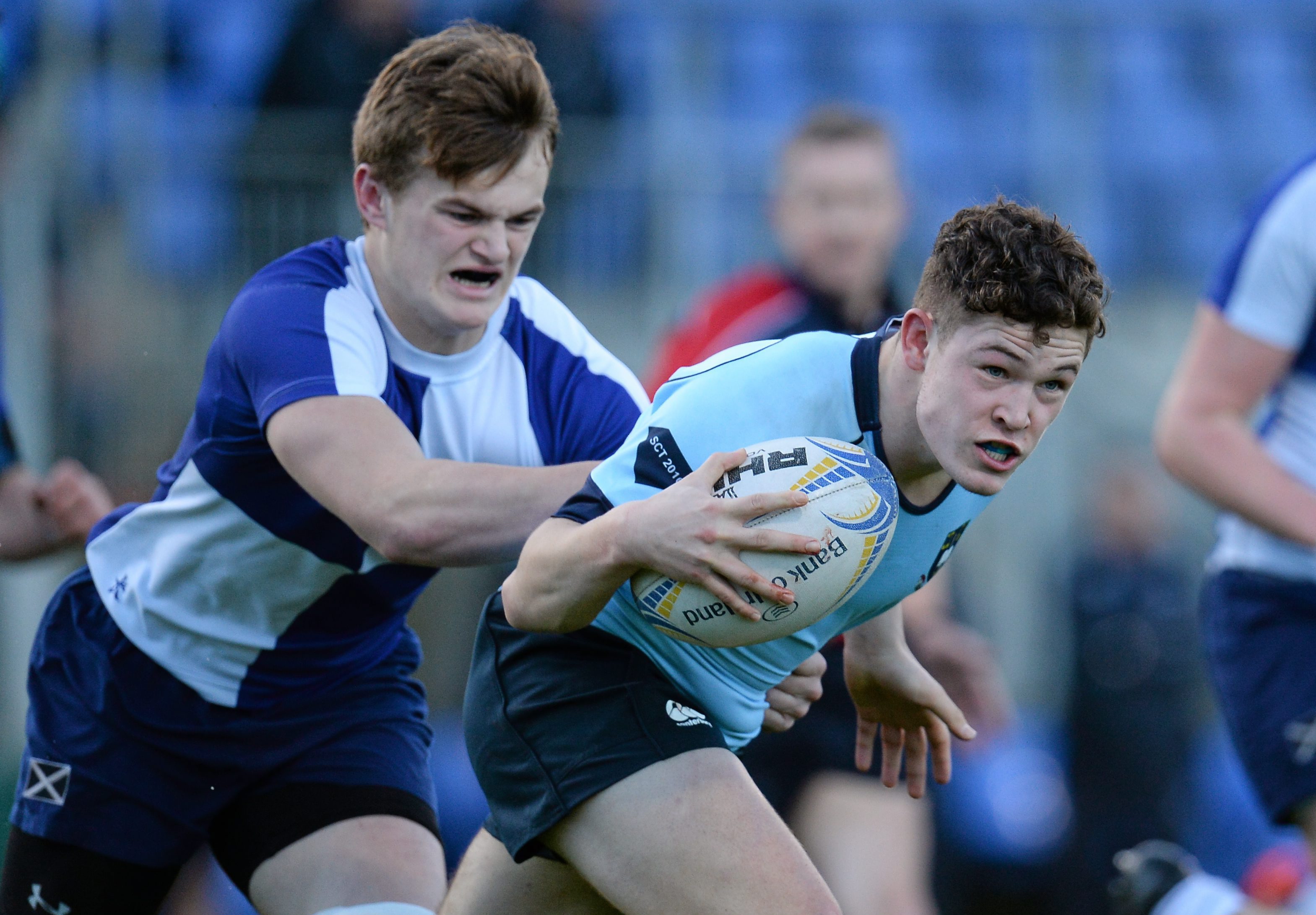 The Booterstown boys were forced into more change when wing Stephen Keane made the unlikely switch to second row for Ben Ryan, who was temporarily removed for treatment.

Even so, they were holding their own against a physically larger pack, centre Pete Sullivan driving the increasingly prominent Dowling into touch.

In the skirmish that ensued, Sullivan was shown yellow and Dowling red for what appeared to be use of his head.

The heat of battle went up a degree or two. Flanker Penny broke away from a maul and Kelly threatened down the right.

This was becoming all about game management as St Andrew’s fly-half Sean Ballance’s smart kick trickled the wrong side of the corner flag.

In return, a chip from his opposite number Ian O’Kelly had to be tamed by full-back Joe McDonagh.

The St Michael’s cavalry arrived and full-back Kelly was twice involved, the first time with a stiff arm, the second with fancy footwork to claim a fine try converted by number eight Barry Fitzpatrick in the 25th minute. 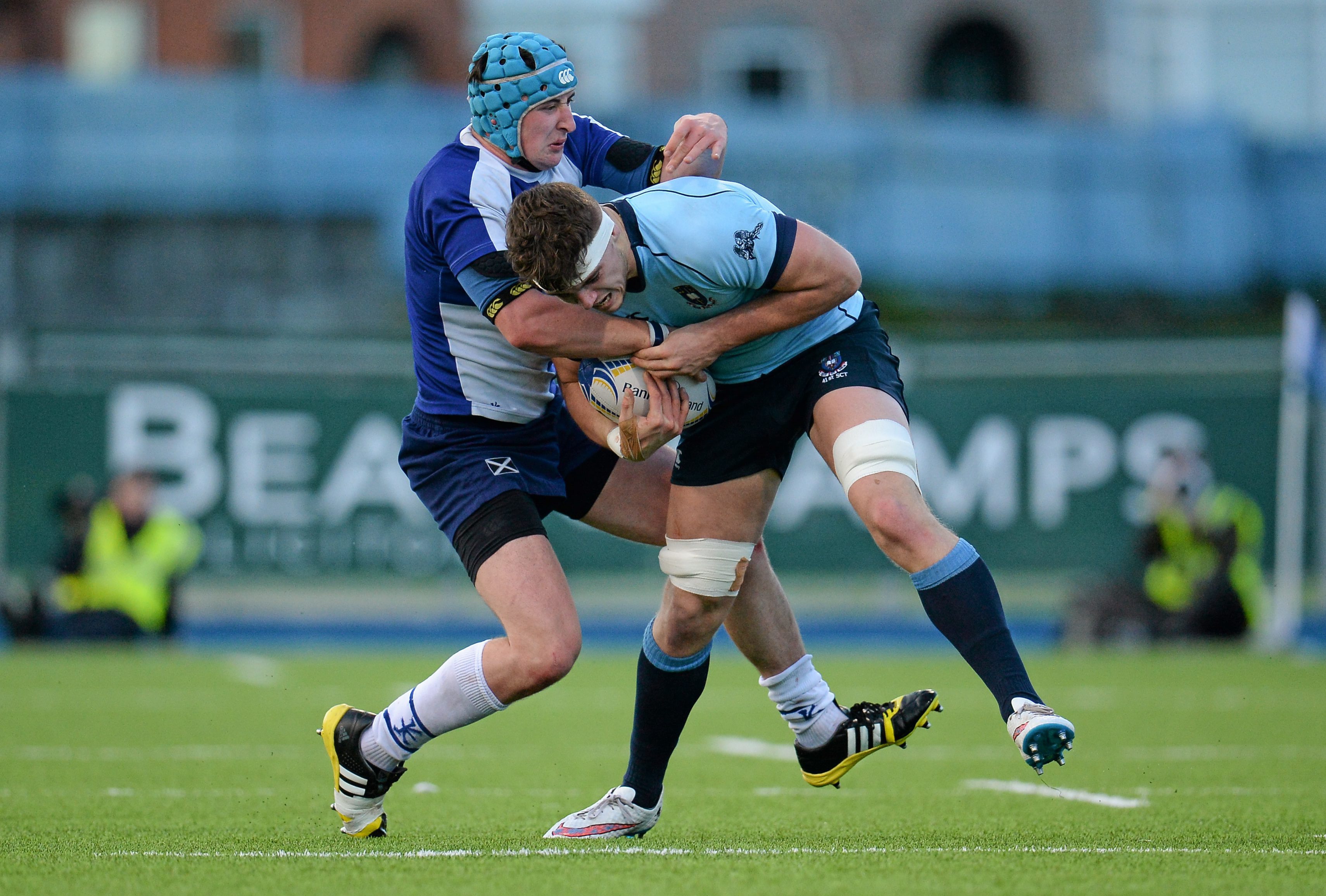 They needed it as Sullivan returned to hand St Andrew’s a one-boy advantage just before their prop Rian O’Flaherty courageously cut down hooker Stephen Judge from behind.

Then, Fitzpatrick exploited the short side to hare away with wing O’Loughlin on one shoulder and prop Ronan Kelleher on the other. He chose the latter.

However, St Michael’s were beginning to flow and the calmness of wing Michael Heaney kept them close enough until O’Kelly’s show-and-go bought the metre he needed to dot down for 12-0 in the 34th minute.

St Andrew’s captain Larmour was late back out onto the pitch, presumably on the basis of an injury.

That man Kelly flew up the right wing to win a penalty for a late hit. They went to the corner. Jack Dunne captured the lineout. But, they over-complicated.

It didn’t matter too much as they came back for a penalty which was slotted by replacement fly-half Harry Byrne.

The balance of play was moving in one direction, hooker Judge cutting an ankle of which any centre would have been proud. 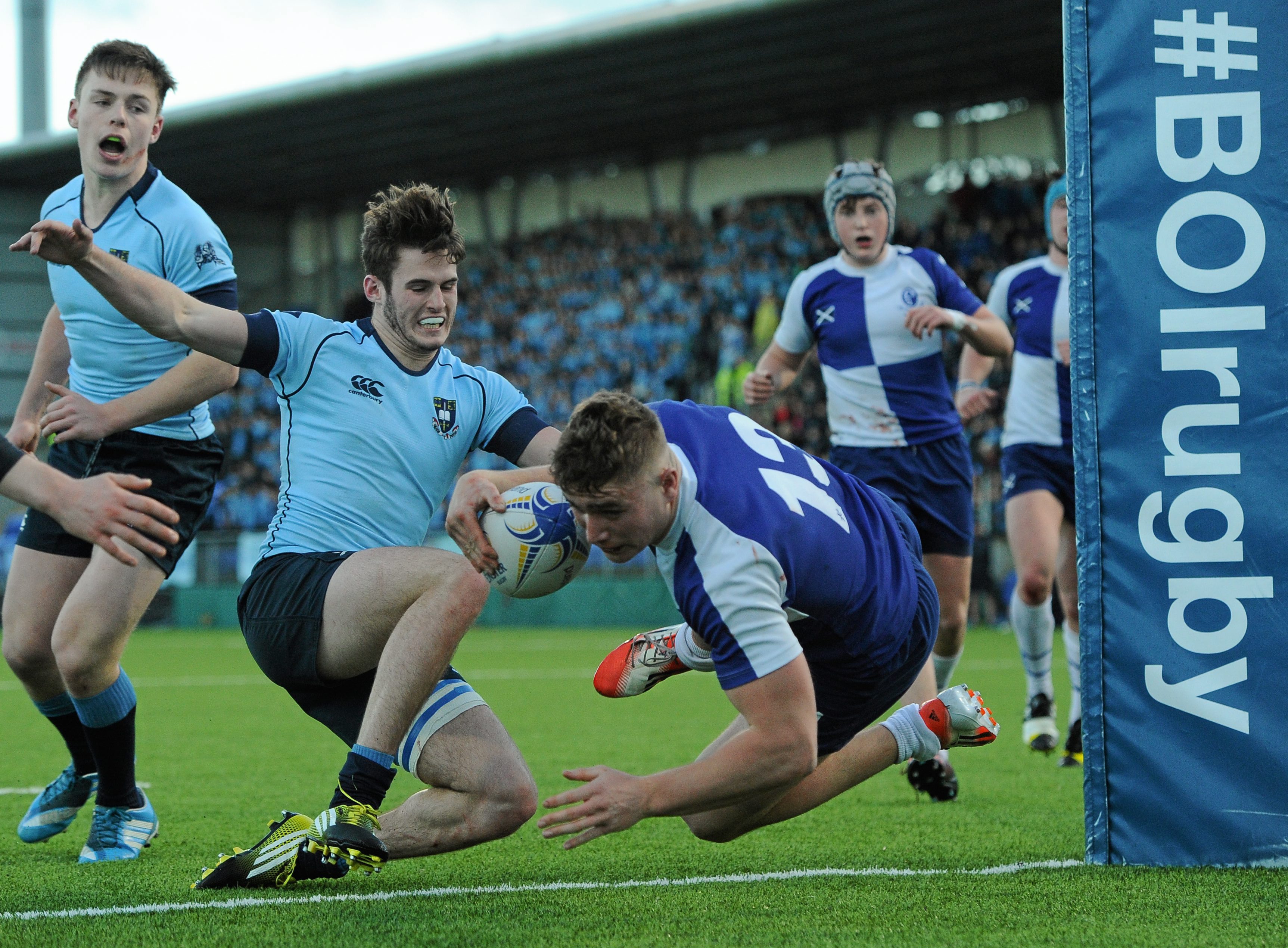 St Andrew’s were not totally out of it. Larmour accelerated away only to be gang-tackled. He was a marked man.

This was enough to lift his troops and they applied concerted pressure to St Michael’s only for Sullivan to be held up over the line.

They came again. Scrum-half Adam Larmour had at least three pops at the line until they were awarded a penalty.

Sullivan got to within a foot and Jordan Larmour finally breached the first and last line of defence.

Sullivan’s conversion made it 15-7 in the 55th minute.

They had to consolidate their position. They did so by defending a rapid attack prompted by replacement Dan O’Donovan.

But, St Andrew’s lost a crucial lineout to concede possession and a penalty for Byrne to make it an eleven-point gap in the 61st minute.

The underdogs were restricted to moments, like captain Larmour’s thrilling breakout, before O’Donovan galloped over from an interception for Byrne to add the extras. 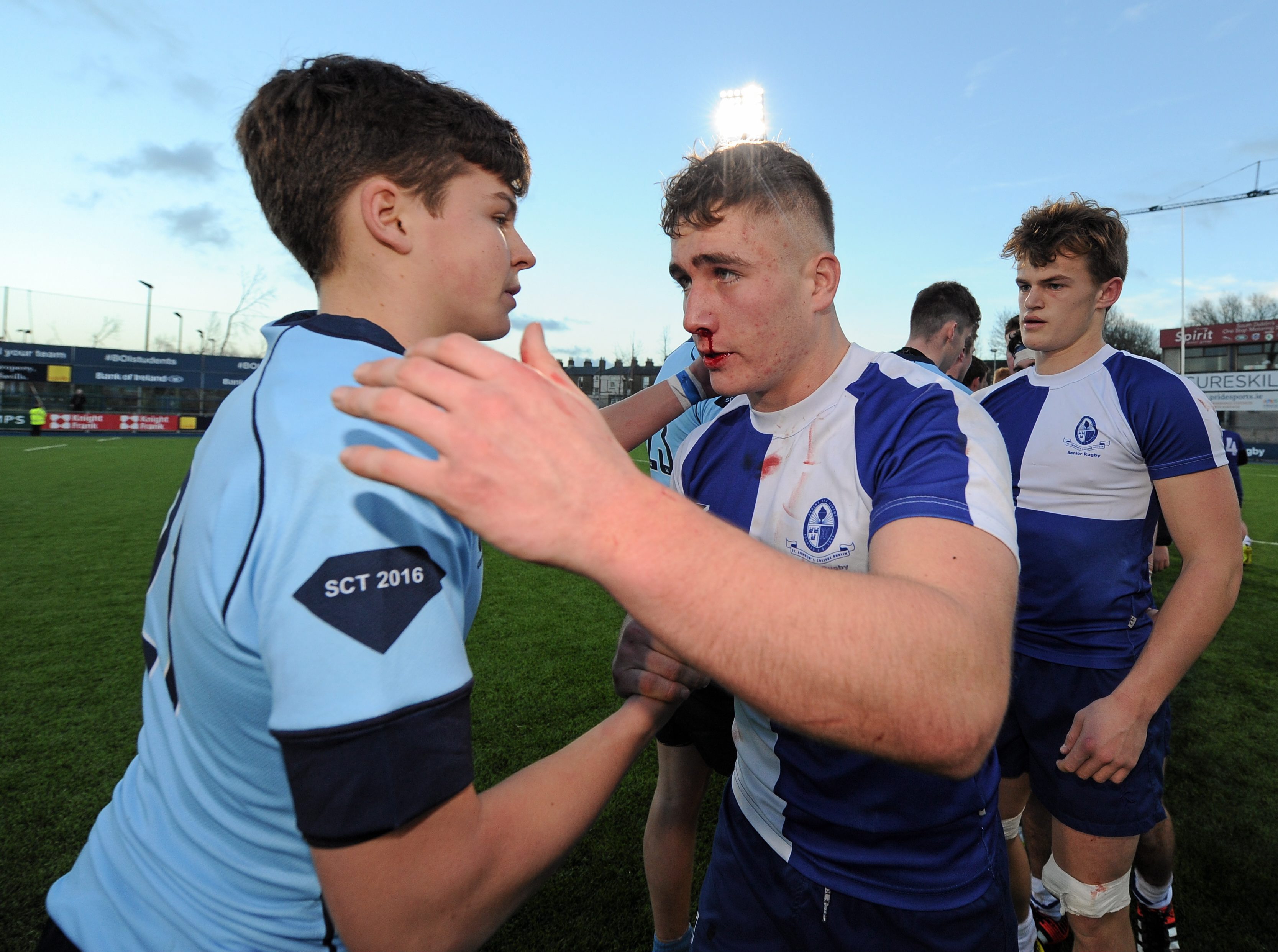