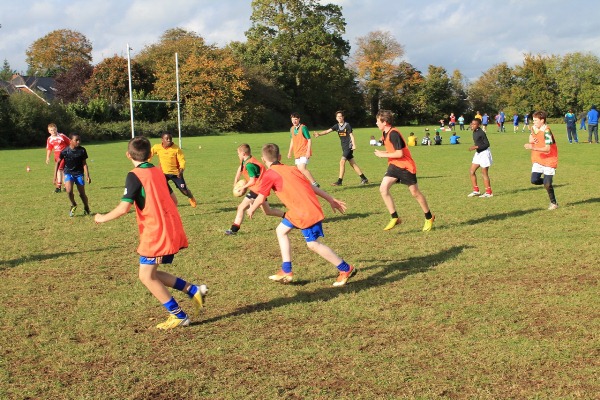 Each week around 160 boys eagerly attended training and a blitz was organised with 64 pupils divided in to eight European teams named ‘Leinster, Toulouse, Edinburgh, Munster, Ospreys, London Irish, Connacht and Ulster.’ The teams were divided in to two sections of four, with the winners of each section meeting in the final and the runners-up playing for third/fourth place.

The games were totally focused on keeping the ball moving in hand, the Leinster way, with an absolute ban on kicking the ball. In all the group matches there was barely a score between the teams which just shows how competitive the tournament was with the ferocious tackling and competitiveness that Brian O’ Driscoll himself would be proud of.

At the end of a long day the emerging group winners were Ulster from Section 1 and Connacht from Section 2 and what a final they provided. Connacht ably led by Dundalk RFC U’ 13’s captain Martin O’ Donnachadh went in to a two try lead before Ulster replied with a try of their own with the score line remaining like this until half-time.

Connacht went on the attack early in the second half to score again but Ulster refused to lie down replying with a try of their own. There was nothing in it at 3-2 for Connacht but try as they might Ulster just couldn’t break the stubborn Connacht defence who went on to become champions on an historic day for the College and Dundalk.

A huge thanks has to go to P.E. Teachers Mr. Staunton, Ms. Glynn, Ms. Brown and all De La Salle College staff for their co-operation over the past couple of months. However, the real stars were all 160 pupils who committed themselves totally to this programme which it is hoped can be developed even further in the near future.