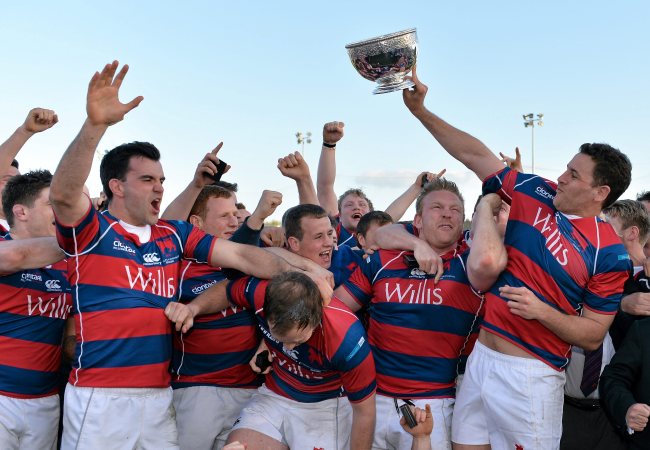 The IRFU have announced the fixtures for the forthcoming Ulster Bank League season and following on from the success of last year’s Friday Night Lights, the evening kick-offs continue and Division 1A sees the return of semi-finals and final for the 2014/15 season.

Reigning Division 1A champions Clontarf FC will take on Young Munster at Castle Avenue in the first league fixture of their title defence.  Last year’s runners-up Old Belvedere host Bateman Cup holders Cork Constitution in Round 1 while Division 1A new boys Terenure take on Ballynahinch who beat Buccaneers in a play-offs to maintain their top flight status.

The semi-finals for Division 1A are scheduled to take place on Saturday 25th April with the final taking place two weeks later on Saturday 9th May. IrishRugbyTV will be increasing the number of Division 1A games streamed live during the 2014/15 season. Details of streamed games will be announced at a later date.

In Division 1B the opening round of fixtures sees the clash of two Limerick heavyweights as Garryowen, relegated from 1A last term, welcome Shannon to Dooradoyle.  The two clubs promoted from Division 2A, Galwegians and Ballymena host Dublin University and Corinthians respectively while Buccs who missed out on a place in the top division last term will travel to Malone in Round 1.

Newly promoted Nenagh Ormond face a tough test in their opening Division 2A fixture as they face a Dungannon side freshly relegated from Division 1B. Blackrock, also relegated from 1B, will make the short trip to NUIM Barnhall in the opening round.  Both Skerries and Thomond won promotion to 2A last season and will face Old Wesley and Queens University respectively in Round 1.

The two Limerick sides relegated from 2A last term, Bruff and Old Crescent will start the 2014/15 campaign with home fixtures against Highfield and City of Armagh respectively. After two seasons in the junior divisions Wanderers return to the Ulster Bank League and will host Sunday’s Well in their opening fixture.