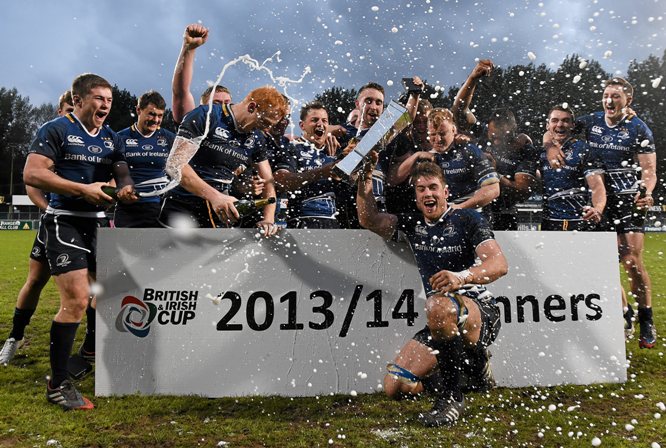 Leinster A will begin their defence of the British & Irish Cup title away to Plymouth Albion in 11 October.

Following confirmation of the new structure, the 2014-15 British & Irish Cup fixtures have been unveiled.

Played across five pools, each with four teams, the English, Irish and Welsh clubs making up this year’s British & Irish Cup will begin the new season campaign during the second weekend of October (10/11/12).

Drawn in Pool 5, current title-holders Leinster ‘A’ will travel to Brickfields, facing Championship side Plymouth Albion on the first weekend of fixtures. Girvan Dempsey’s men are the only team to have successfully defended their title, securing a win over Leeds Carnegie at Donnybrook in May to retain the trophy after claiming it for the first time in 2012-13.

Leinster A and Plymouth will be joined in Pool 5 by Jersey RFC and an as yet undetermined Welsh Principality Premiership team.

A local derby awaits 2013-14 runners-up Leeds Carnegie as they host Rotherham Titans at Headingley. While both sides were knocked out of the Championship play-offs, each impressed across the board last season. James Lowes’ men showed commitment to playing with ball in hand, scoring 91 tries in the process while Rotherham captivated Championship followers, progressing to the knock-out stages for the first time following a seventh-place finish in the previous season.

The Welsh participants in the tournament will be based on regional play-offs at the start of the season, with final positions in last season’s Principality Premiership giving teams Home field advantage. Pontypridd represented the Welsh contingent in last year’s knock-out stages, narrowly losing out to eventual winners Leinster ‘A’ in a thrilling encounter at Sardis Road.

After discussion among all four Unions, four Principality Premiership teams will continue to represent Wales in the competition, joining the 12 clubs of the Greene King IPA Championship as well as four provincial teams from Ireland. Due to changes in the competition dates, Scottish clubs will not participate in the 2014-15 competition meaning that season’s competition will move from 24 teams to 20, playing in five pools of four.

Taking place on 24 January 2015
Top side in each pool progress to knockout stage, plus three best runners-up
8 quarter-finalists ranked with teams ranked 1-4 having home advantage
Semi-finals and final