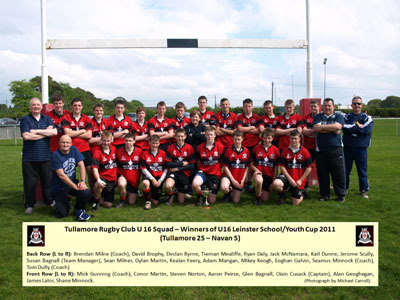 By winning the Leinster Schools/Youths U-16 Rugby Cup last month, the Tullamore Under-16s created a bit of history by becoming the team to win the 60th title for the club…

This win was the 57th Leinster title to be added to the Roll of Honour with the three All Ireland Titles won by the club.

The groundwork was laid on the Friday night when the 4th Team won the Leinster Fourths Dunne Cup (59th title) and had not the U-16s won, the honour would have fallen to the 3rds who won the Leinster Anderson Thirds Cup two hours later.

The collective knowledge of the Under-17s coaches/management and the Under-15s combined to steer the team to this win. Beating a strong Navan side 25-5 was an achievement in itself as Tullamore were very much the underdogs due to Navans victories in League and Cup at Under-15 the previous season.