A surprize visit for The Salmo Eagles… 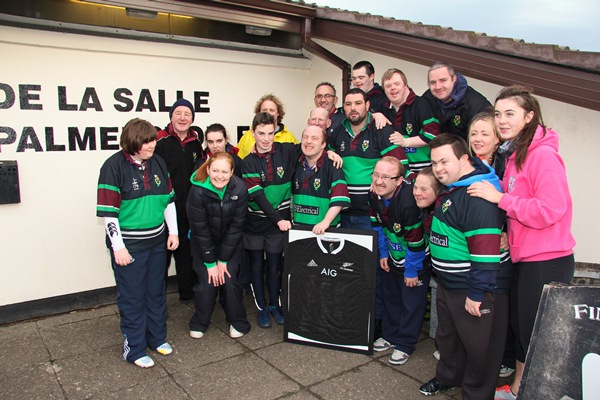 On their recent visit to Ireland, World Cup winners New Zealand showed their support for their favourite team in Ireland, The Salmo Eagles, by presenting them with a jersey signed by the whole All Blacks Squad…

Word had reached the All Blacks about “The Salmo Eagles“, which is a special needs tag rugby team that trains every Sunday morning at 12.00 during the rugby season at De La Salle Palmerston FC’s home ground at Kirwan Park in Kilternan.

Under the guidance of Head Coach David Hicks, the eagles are coached by a team of enthusiastic coaches and helpers who make every game and training session an enjoyable event for everyone, with total emphasis on fun and participation.

On top of the All Blacks support, the last 12 months have been a very exciting year for The Eagles, who also had the privilege of playing at half time at a Leinster home game in the RDS and also being introduced to the crowd at one of their Heineken Cup Games at the Aviva stadium, where they proudly did a lap of the pitch at half time.

The Eagles also hosted their inaugural round robin tournament at Kirwan Park, where the friends from other teams in Leinster and Ulster travelled to part take in a fabulous event and Team Captain Paul Hogan was also invited to Aras an Uchtarain to meet President Michael D Higgins.

If you have a family member who you would like to bring along on a Sunday morning or would like any information on playing, coaching or just getting involved with “The Salmo Eagles” please feel free to contact head coach David Hicks directly at: Davidhicksmeats@gmail.com or by mobile on 087 256 56 56.

New players are always very welcome, this is not rugby as you know it and it is non-contact with the emphasis purely on participation and fun!