Across the Laighin: The Daisy Earle Interview 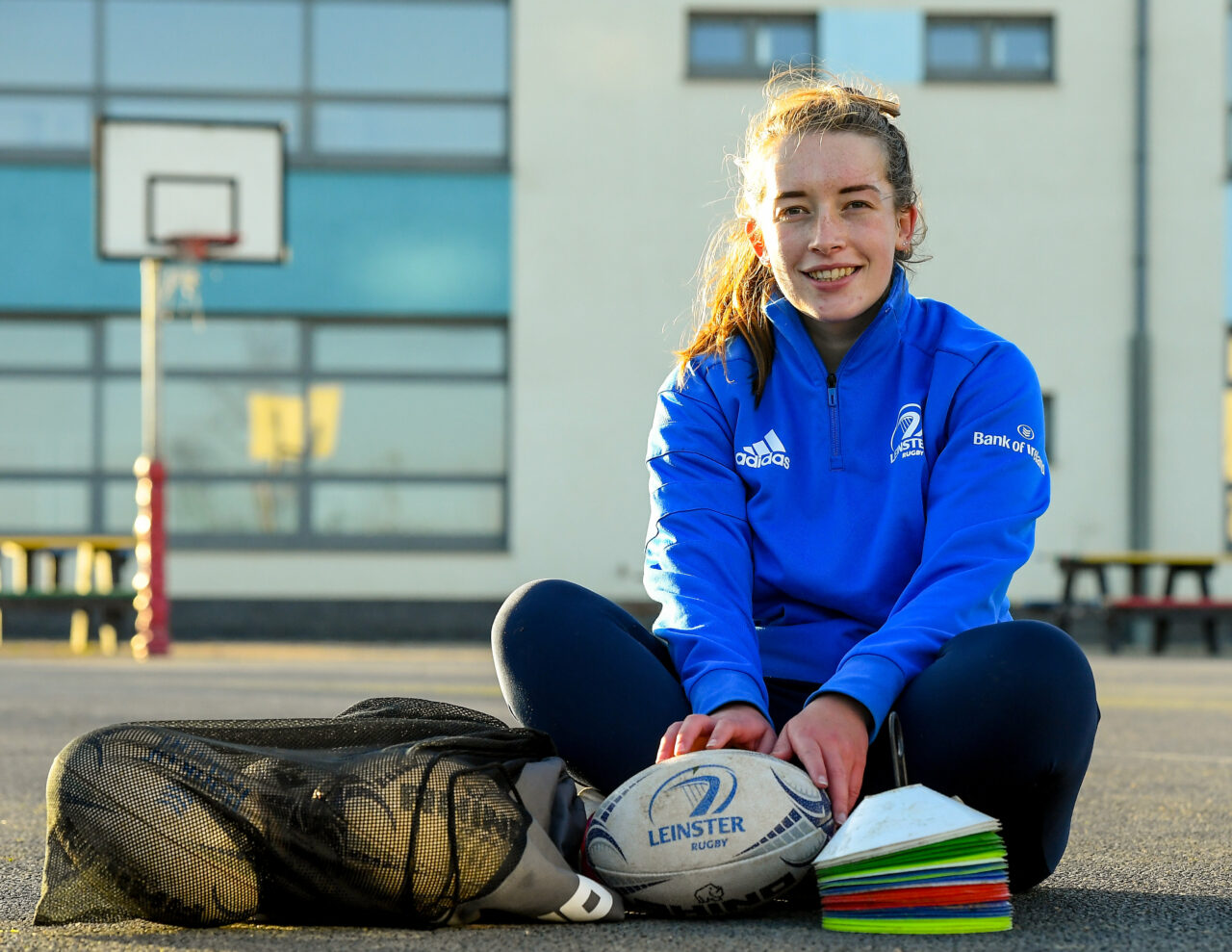 ‘Across The Laighin’ is a new quarterly magazine published exclusively for the benefit of Official Members.

The second issue went live in March and over the coming weeks we will be giving Leinster Rugby supporters access to excerpts from some of the interviews and feature pieces.

We sat down with Leinster Rugby and Ireland player and Club Community Rugby Officer Daisy Earle who spoke to us about her journey from the ground up to the very top of the game.

Daisy spoke to ‘Across The Laighin’ about her early years with Gorey RFC, the role models that inspired her and her hopes for the future in her role as club community rugby officer.

“I want to have the same impact on some of the kids in Gorey that my CCRO had on me.”

It’s often said that everyone has a story to tell. Some of those stories are more adventurous than others, some have an element of the unbelievable about them, and some are tinged with more than a little bit of coincidence or déjà vu.

In Daisy Earle’s case recently, her story has tilted in the direction of the coincidental.

Like so many others, the Covid-19 pandemic hit the Leinster Rugby star hard. She suddenly found herself without a job. In normal circumstances, you might be able to shrug that scenario off by focusing on studies or leaning on friends around you. That’s a little bit harder to do when you’re facing into a national lockdown.

This is where the coincidence comes into play.

Around the same time, the role of Club Community Rugby Officer – CCRO for short – for Earle’s home club, Gorey RFC, became available and a gentle nudge from a coach encouraged her to add her name to the applicants.

Why? Well, a love of the game first and foremost. But, also, positive memories of one of her predecessors, someone who visited her primary school to spread the gospel according to Leinster Rugby and encourage as many children as possible to take up the oval ball across the province. 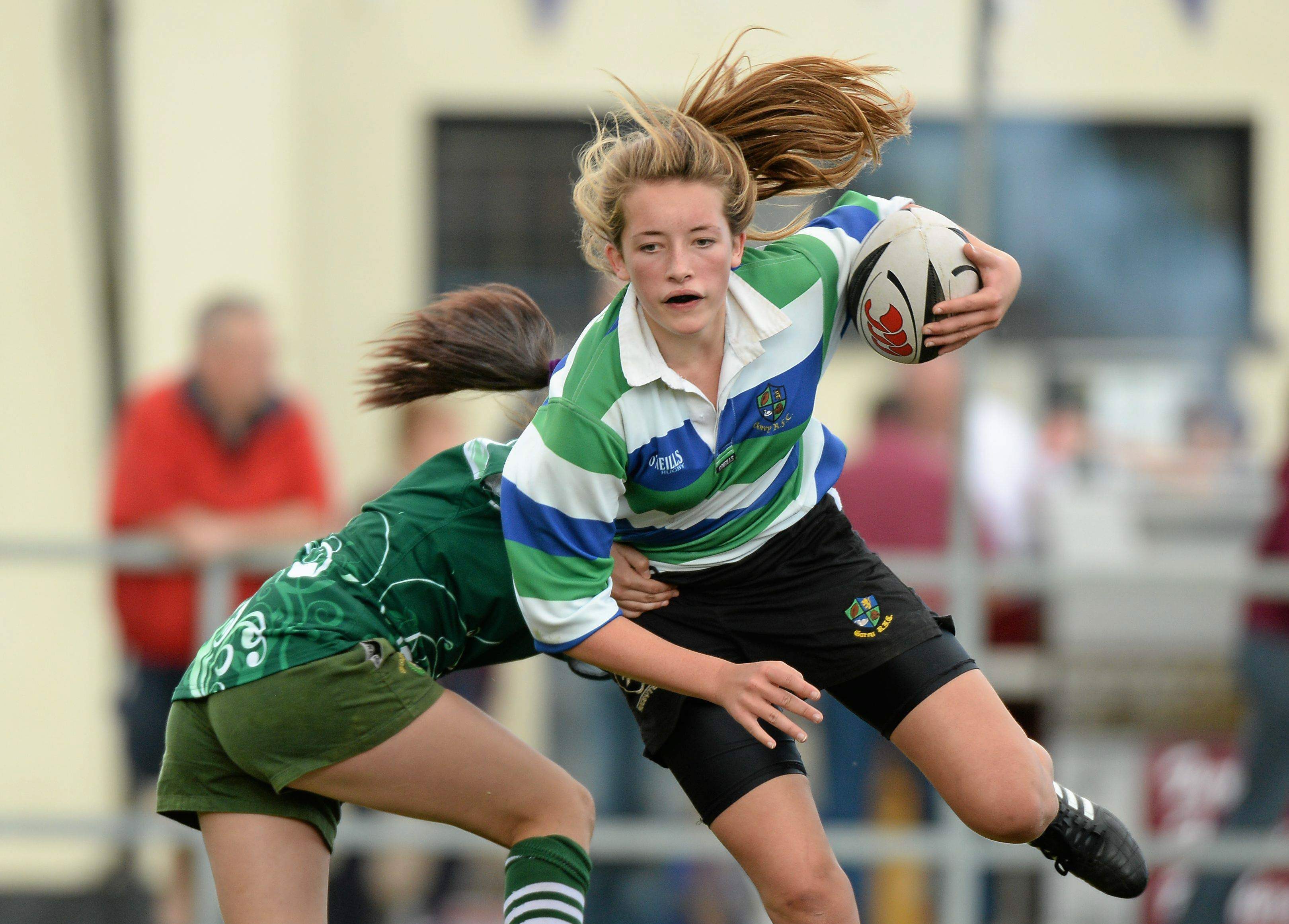 Earle admits she was hesitant to take up the game despite a lot of persuasion from her brothers but it was when she had a taster during her days in Ballygarrett NS that it finally dawned on her that this was most definitely a game she could stick with.

“It was actually in primary school when our local CCRO (Matt Bater) came in to train with us. He’s now the principal in Gorey Central School, so I’m dealing with him now as the Gorey CCRO to teach rugby in his school,” she explains.

“He was the one to convince me to give it a go, always telling me ‘I think you would be really good at rugby, your brothers are really good, it’s in the blood’.”

Eventually, thanks to Bater’s influence in school, as well as the rugby-mad atmosphere at home, the decision was made to head down to Gorey’s Clonattin grounds.

“I was unsure as to whether I liked it or not as there was no one my age playing.” 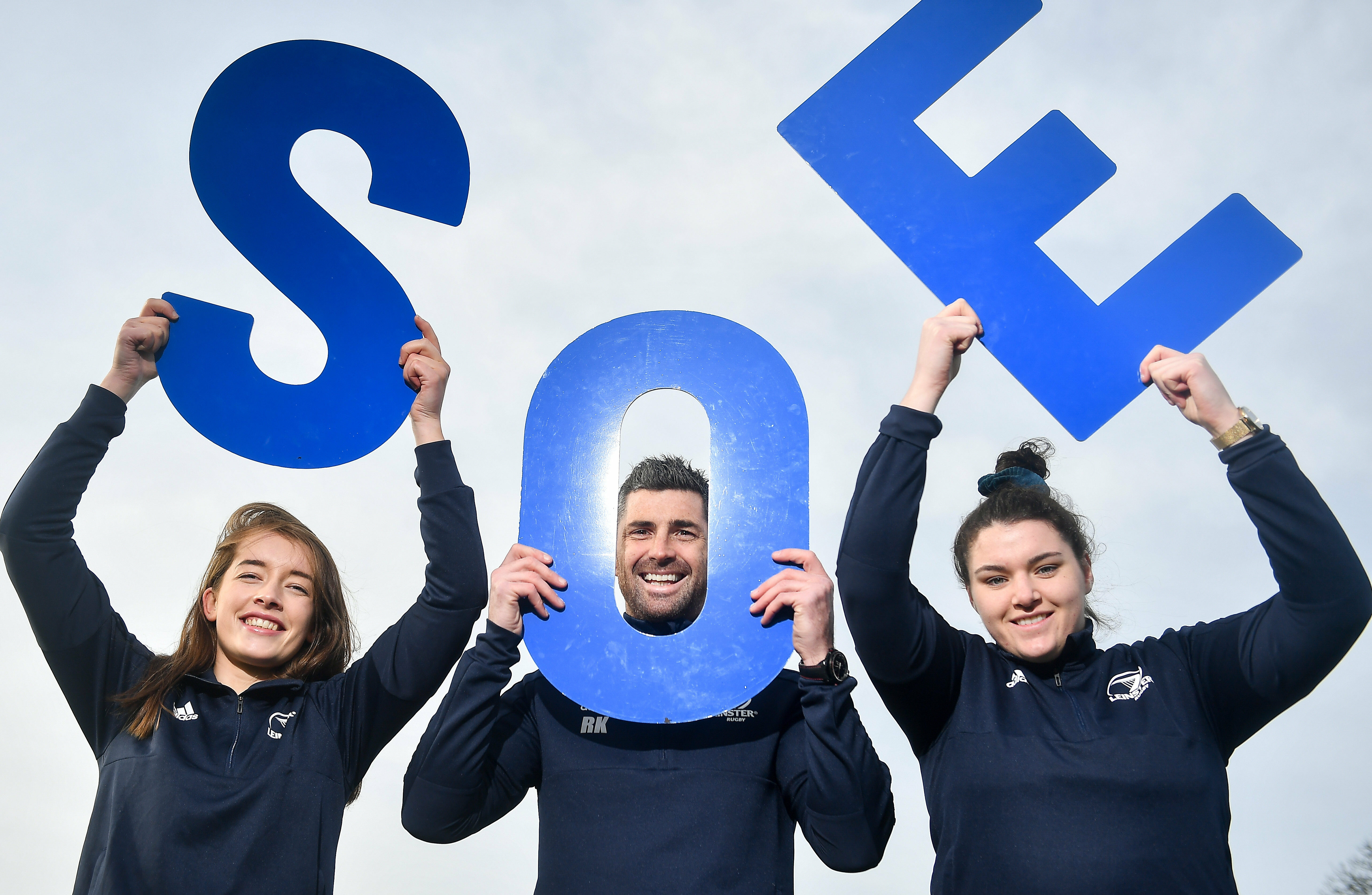 “I went to the Leinster School of Excellence and met so many friends there that I would still meet on the rugby pitch to this day and the level of standards at that camp were great.

“I remember getting one of the hardest tackles I’ve ever got in my life and thinking at that moment, I really need to up my game and it really pushed me on to want to get better.”

So, that was it. Hooked. And it now encompasses both her professional and private life.

From that experience as a beginner to her position now as the Gorey CCRO and a member of the Leinster squad, there has been plenty of development and lessons in between.

Earle currently holds dual status allowing her to play for both Gorey and Railway Union.

Her movement to the Sandymount club came in 2017 when she left Wexford for DCU, beginning the Environmental Science and Technology degree.

After a spell balancing the workload of a demanding college course and the high-intensity of the Irish Sevens development team, attention switched back to the traditional code.

“I did get the opportunity to go to Dubai and we were runners-up in that tournament. But, I found it hard to keep up both. I would have loved to have kept going at just the rugby but I had too much other stuff going on,” Earle explains. 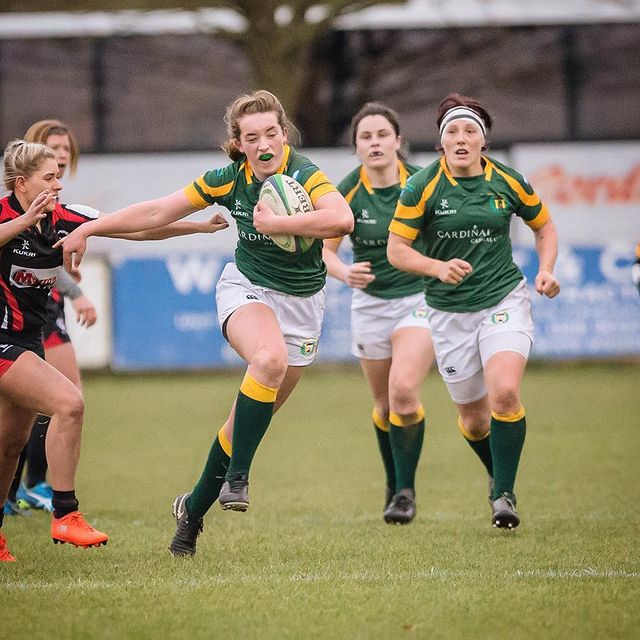 “I started playing club rugby with Railway Union in 2017 when I was in Dublin and I really liked that, you had training twice a week and a game on Sunday, so I found that really good to manage along with college.

“In 2018, Railway sent myself and Aimee Clarke over to Washington DC to train with Scion Rugby Academy, it was an unreal experience, all the girls were from different countries and playing at different level.

With the female game in Ireland still operating on an amateur basis, there can be various obstacles, work and studies, that can interfere with opportunities on the field.

After her return from the US, Earle was invited to train with Adam Griggs’ Ireland team as part of their development squad and, suddenly, the schedule was full once again and the welcome challenges of balancing it all cropped up again.

“I got called up to the Irish 15s women’s squad as a development player, that was a bit daunting,” she confesses, “but was great seeing the commitment and high standards.

Earle’s Leinster senior debut came on an historic day for rugby in the province as it was the first occasion when both the men’s and women’s teams featured in a doubleheader.

A win against Connacht that day would be the first step on Leinster’s way to clinching a second consecutive title, again beating our western neighbours in the final.

A first year in Leinster blue that was full of highlights and that ended with a trip to London to take on Harlequins in the first ever women’s club game to take place at Twickenham Stadium. She even managed to cross the whitewash for a try.

As a keen promoter of the women’s game, she was also impressed at the number of the province’s partners and suppliers who were pro-active in extending their support of the men’s team towards their female counterparts.

“To get a starting place on the team was so amazing and to get to play in Twickenham was just so surreal, the crowd that was there, the match day effects – all I thought is I want to do this every weekend!

“We got some great opportunities, we got so much gear and packages from all the different sponsors – definitely the most gear I have ever got from rugby!

“We were so honoured to get all this stuff, I remember being at training one night and we were all really tired. Everyone was pushing themselves so much ahead of a game that weekend and there were a few mistakes being made, knock-ons, dropping balls.

“Sene (Naoupu, Leinster captain) called us all in and reminded us how we needed to pick up the standards. We were receiving all this great support from everyone and we needed to show them our appreciation and get our standards up.

“It really made us want to up our standards for women’s rugby, not only in the province but in the country. It pushed us on to be better as they were putting their time and resources into us.” 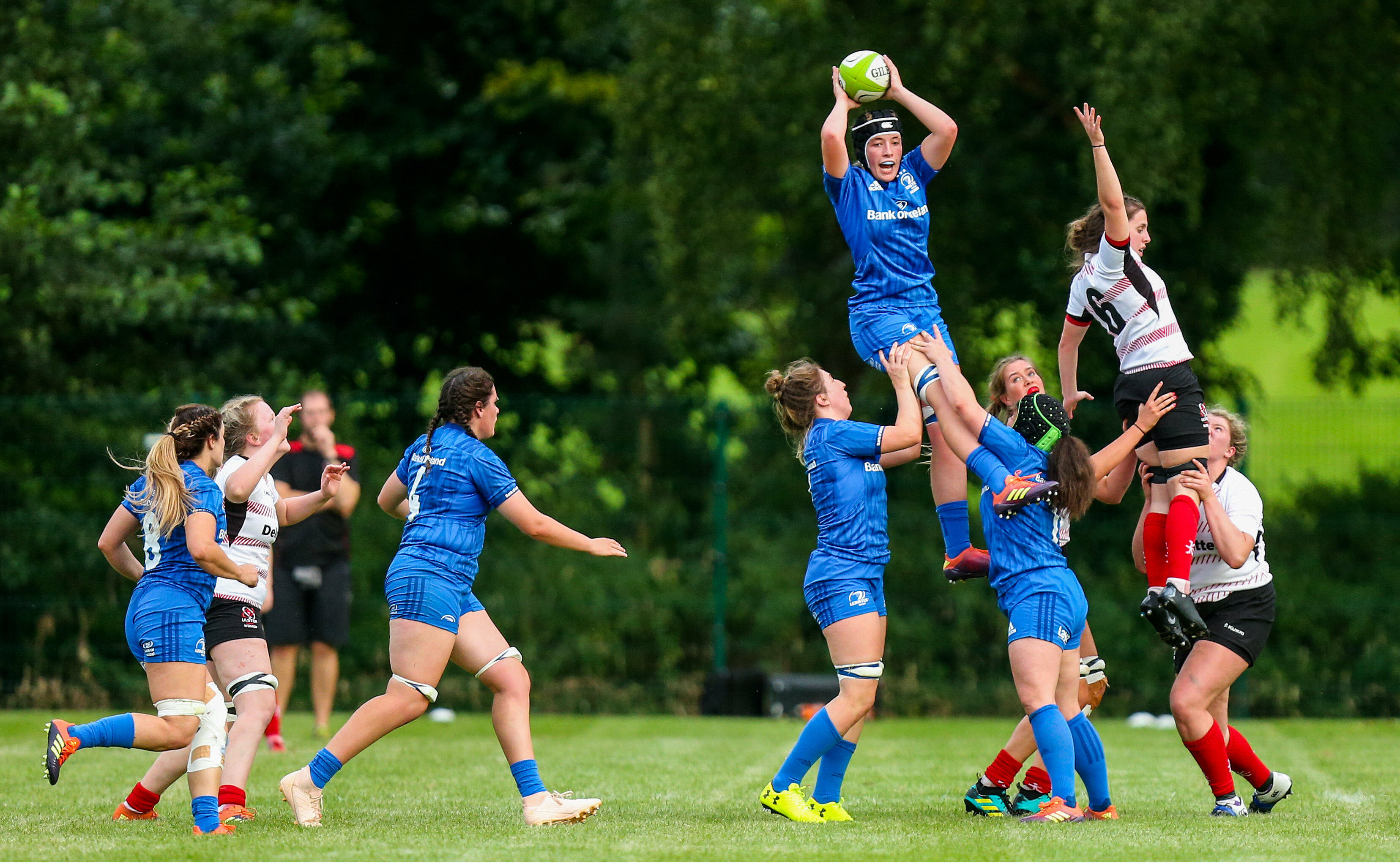 Driving standards. That’s where Earle really comes into her own. Rather than pay lip service to the promotion of the game, her new role has allowed her to get stuck in at grassroots level and relay her experiences – wide-ranging for someone who is just 21 – back to the future stars in her area.

One of the key roles of Leinster Rugby’s CCROs is to break down barriers for those who feel that rugby is not for them, visit schools, put a rugby ball into each pair of hands, and act as a support to the local club.

“The reason I love talking about my experience, is I want to now show the girls I’m training with as the CCRO that there is pathways and opportunities for them in the game of rugby.

“I want to show all young kids, both boys and girls, what they can get out of rugby. Not everyone is going to get to wear the blue or green jersey but everyone can get something from the game.

“Getting compliments from parents in the club saying how it’s great to see a female leading the way and bringing more girls to the clubs from the local schools. 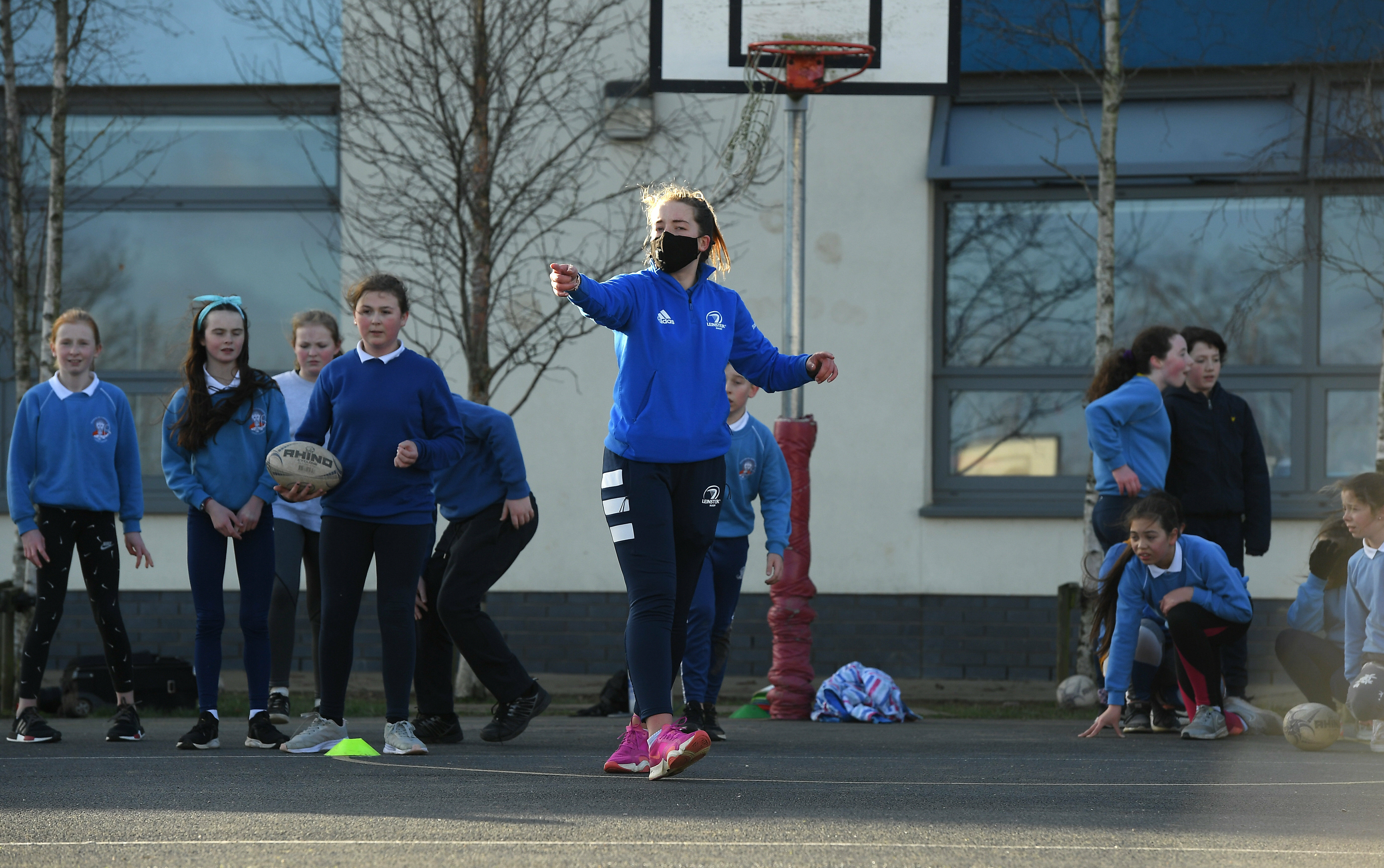 Twenty-one years of age, time spent playing rugby all over the world and at the highest level for club and country in both Sevens and XVs, it’s fair to say that Gorey and the surrounding area have placed their future in safe hands.

“What I’m looking forward to most in my role is I would love to have the same impact on at least one kid’s life as my CCRO had on me, that one decision to go to the club,” she adds.

“Even if I can make an improvement on one child’s game or life, there is so many benefits to playing the game, even the mental health side of things, all my core group of friends come from rugby, there is always that community there for you.

To emulate the effect that a past CCRO had on her is Earle’s goal, if even to get just one child to look at rugby as an avenue for them to exercise, make friends and create a new hobby.

Still at such a young age herself, she acknowledges she won’t have all the answers but hopes that she can be a starting point for any interested parties, a friendly face who can provide guidance to players and parents alike.

“I would just tell them to go to training and give it their all and to have fun. If you want to improve your game, always feel comfortable to approach me, as I will always be in the club.”

It’s clear to see that it won’t be long before Leinster and Ireland have another Gorey presence in the ranks.