Action hots up for Gleeson Cup… 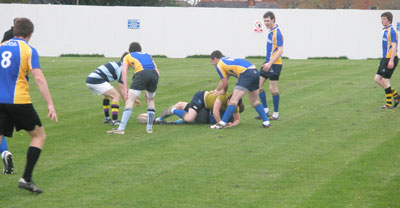 Old Rivalries were renewed in Grangegorman this week when the annual Gleeson Cup game returned. The Gleeson Cup has a lot of history attached and forms part of a great tradition within Colleges Rugby…

Martin Gleeson was CEO of City of Dublin VEC when he donated the cup for competition among the CDVEC 3rd Level Colleges. The Gleeson committee extended the competition to a number of colleges ‘beyond the Pale’ like Dundalk Regional College prior to it becoming a national competition under the umbrella of the ICRU that started in 1986.

Tony Gleeson, son of Martin continued to finance the medals and allowed the ICRU to use the Gleeson name for an All-Ireland competition. The cup reverted to DIT when the new sponsors of the ICRU insisted that they purchase a cup and name it the Bank of Ireland Colleges Cup. Tony Gleeson died last year in Africa.

Originally on returning to DIT the cup was contested between the Bolton St Bears, the Kevin St Kings, the Aungier St Angels, the Mountjoy Sq Marauders, the Cathal Brugha St Cardinals and the Rathmines Ravens; with the Kings being the dominant force.

It was then reformed early this decade as an annual head to head between the North and Southside Colleges which is the format it now takes. In recent times it is the Southside which has come out on top winning the last 2 Cups on offer.

The Gleeson Cup games are always keenly contested with a lot of inter-campus rivalry coming to the surface at just a mention of the cup and this year’s game was certainly no different. Again it was the Southside which came out on top winning on a score line of 35-33. The more experienced Southside just had enough to see them over the line against an enthusiastic Northside team which contained a number off first years who were experiencing the Gleeson Cup for the first time.

The game was full of attacking rugby with both sides looking to run the ball at every opportunity and the early exchanges saw the Northside fly into an early lead before the more battle hardened Southsiders clawed their way back into the game and took the lead and the Cup just before the final whistle.

For more details on Rugby in DIT contact Eoin Kerin, Rugby Development Officer at rugby@dit.ie or 087-6276565.