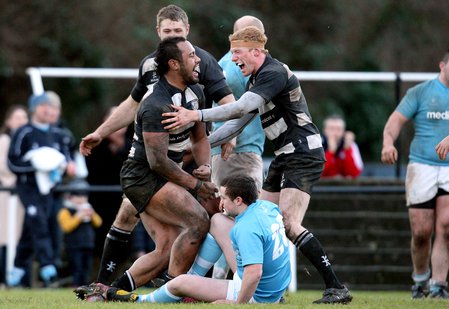 They are now three points clear at the top of the table and seemingly in a great position to secure one of the three play-off spots. But Saturday’s encounter did serve as a reminder that nothing can be taken for granted.

It was only in the closing stages that they eventually pulled clear with two tries from No 8 Leo Auva’a and left-wing Dave Mongan, both of which were converted by out-half Andy Dunne. Prior to that, Old Belvedere were, at times, desperately holding on to a 10-3 advantage.

Garryowen belied their position at the bottom of the table to put Old Belvedere under real pressure, but, as so often happens to a side in their situation, little went their way. There’s also the undeniable fact that they lacked that bit of extra craft to finish off their scoring opportunities.

If Garryowen were to cause an upset, they needed to take advantage of the strong wind in the first half. Instead, they found themselves 10-3 down at the interval.

Conal Keane gave Old Belvedere an early 3-0 lead with a penalty before out-half Declan Cusack equalised with a similar effort for Garryowen. Unfortunately, the Limerick outfit were then to provide their rivals with an attacking platform when they knocked-on from the kick-off.

Typically, the league leaders made them pay by scoring a superb try from the resulting scrum. Auva’a, scrum-half Simon Keogh and full-back Danny Riordan all handled before right-wing Eddie Devitt crossed in the corner.

To add to Garryowen’s misery, Keane managed to land the conversion in the difficult conditions. Effectively, Garryowen’s chance appeared to have gone when they were still 10-3 behind at the break but they somehow raised their game considerably when playing into the wind in the second half.

Had it not been for some smart defending on the part of Riordan, an excellent break from centre Corey Hircock would surely have provided Garryowen with a try. A number of Garryowen forwards also came close to breaking through but

Old Belvedere withstood the pressure and then showed just how to put away your opportunities.

A well rehearsed line-out routine provided Auva’a with the chance to go over the the right of the posts. And this was added to a few minutes later when a flowing move ended with Mongan demonstrating his finishing skills by scoring a further try.

Phil Werahiko, the Old Belvedere coach, admitted that his team had been made to work exceptionally hard.

He said: “Garryowen were never going to allow us to play the game we wanted to play and the conditions were very difficult out there. We probably had just that bit more skill as opposed to physicality, that’s what won it for us.”

CORK CONSTITUTION marked the departure of their free scoring wing Cronan Healy to Australia with an important 22-17 victory over St Mary’s College at Temple Hill.

The win keeps them in second spot in the table, five points ahead of third placed St Mary’s. Healy was playing his last game before departing for a year long stint in Sydney where he plans to link up with Randwick.

There’s no doubt that the 29-year-old will be missed by Cork Con. He has consistently been one of the best finishers in the All-Ireland League.

Healy is the club’s record try scorer but he was unable to add to them against St Mary’s. Instead, the game’s crucial try was scored by another of Cork Con’s most consistent performers in their No 8 and captain Frank Cogan.

The sides were level 6-6 early in the second half when Cogan gathered at the tail of a St Mary’s line-out and raced away for a spectacular score. Scum-half Gerry Hurley converted.

Hurley was responsible for the remainer of Cork Con’s points with five penalties. Matt D’Arcy got over for St Mary’s try, with full-back Gavin Dunne landing four penalties.

They came from Mark Doyle, Matt Costelloe, James O’Neill and a penalty try. While Young Munster move back into the top half of the table, Dolphin drop into the bottom two.

Shannon are also on the move upwards following their 38-20 victory over Blackrock College at Coonagh. Like Young Munster, they were inspired by their out-half Tadgh Bennett.

Clontarf continue to head Division 1B following a hard fought 16-12 away victory over UL Bohemians at Annacotty.

Former Leinster second-row Ben Gissing’s contribution was vital with Michal Keating getting the only try of the game.

Lansdowne have moved into third spot following an excellent 30-18 success over recent Munster Senior Cup winners Bruff on the artificial back pitch at the Aviva Stadium. If only Lansdowne could play as well away from home.

They scored four tries through Ron Boucher, Eoin Sheriff, Eoghan Hickey and Dave Hewitt, with the rest of the points coming from the boot of Hickey.

Unfortunately, the bad weather caused the postponement of the remaining Division 1B games between Dungannon and Buccaneers and Galwegians and UCC.