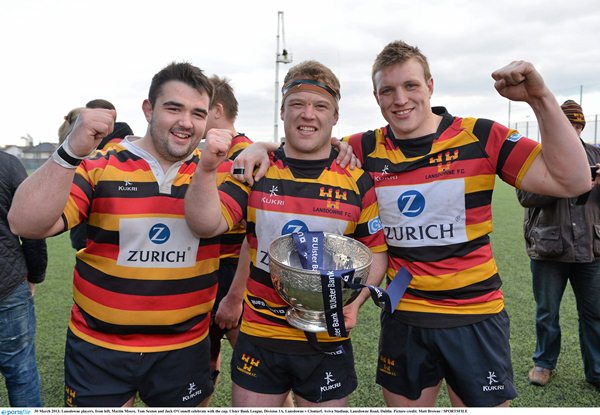 ‘The Ulster Bank League represents all that is good about the amateur game of rugby. The commitment made by teams the length and breadth of the country results in an extraordinary high standard of play and those who support clubs week in week out will testify to this. Indeed I was greatly encouraged by Darragh Fanning’s (St. Marys) remarks in recent newspaper interviews following his selection for Leinster when he said the League was populated by hugely talented players, many of whom are well capable of making the step up to the professional game.”

‘Allied to this commitment to excellence on the field is the wonderful camaraderie which exist between Rugby Clubs and the way in which host clubs look after the travelling supporters, creating a bond amongst clubs which is, in my opinion, unique in Irish Sport and which upholds a rugby tradition stretching back generations.

‘I applaud all 52 clubs for the commitment and dedication which make the Leagues such a special part of Irish Rugby and I would encourage people, whether hardened rugby supporters or those eager to sample rugby, to take an interest in your local club, go along to a league match any weekend and experience the genuine quality of the rugby along with the warmth of the welcome.”

The Opening weekend of the leagues sees some mouth watering fixtures with the pick of the crop being:

Division 1A    Holders Lansdowne taking on newly promoted UCD in what promised to be a wonderfully skilful contest at the Aviva Stadium.

Division 1B   The clash of newly promoted Terenure and UL Bohemians, who have just come down from division 1A will make for an intriguing contest at Lakelands Park.

Division 2A     City of Derry play host to newly promoted Rainey OB who will be anxious to show that their extraordinary form of last season, when they won division 2B  with 11 points to spare, was no flash in the pan as they seek to continue their march into the higher ranks.

Division 2B     Sees a highly competitive all Munster clash when Nenagh Ormond play host to Middleton for early bragging rights in the south.

The lure of the Ulster Bank League was further captured earlier this week by Mike Ruddock, Ireland under 20’s Coach and coach of reigning Division 1 Champions Lansdowne when he commented:

‘This league is fantastically competitive and entertaining, with a standard that truly surprises those who come along to watch and while we stole a march on the rest last season, I have no doubt they will be waiting to pounce this season. There are lots of twists and turns along the way but for us the focus has to be about maintaining the standards we set last season and after that it comes down to very fine and margins.”