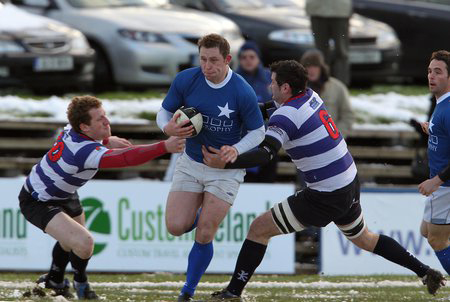 Click here to get the AIL results from the weekend.

Out-half Gavin Dunne kicked a brace of second half penalties to guide St. Mary’s College to a narrow derby win over Blackrock College at Stradbrook on Saturday.St. Mary’s, who completed the double over ‘Rock last season, battled their way to a fourth successive win in All-Ireland League Division 1A.

They were 15-3 to the good at half-time, with tries from centres Stephen Grissing and Ronan Doherty doing the damage. Blackrock’s points came from a Rob Keogh penalty.

The second half was a much more even contest and Blackrock raised their game, particularly in the forwards where Leinster prop Ben Prescott, captain Des Dillon and flanker Paul Graham stood out.

Tries from Dillon and number 8 Michael Noone made a real game of it, but Dunne’s right boot got St. Mary’s over the finish line in what was a real arm wrestle of a match in the end.

The Templeville Road outfit’s fourth victory of the campaign has seen them close the gap on second-placed Cork Constitution to just two points.

Those two sides meet in a pre-Christmas cracker next weekend, while fourth-placed Blackrock are on the road to Shannon.