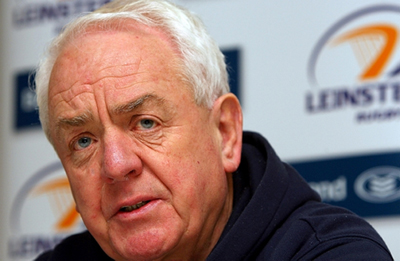 Speaking ahead of Saturday’s round 6 clash, Leinster Consultant Coach ALAN GAFFNEY said that the squad are determined to finish the group stages strongly against a dangerous London Irish side…

‘There a couple of minor bumps and bruises but we’re hoping that everyone will be available. We won’t know that fully until a little bit later in the week, but we suspect that we’ll be running out with a similar side this weekend. Both Jenno (Shane Jennings) and Sexto (Jonathan Sexton) came through fine.

‘We’ve got a lot of options at the moment and we have a strong squad, so when you have variables to play (with) then it’s a great position to be in and it does stand us in good stead for what’s to come this weekend and, hopefully, what’s to come in the future.

‘I think that everybody expected Brive to come over to the RDS and lie down, but we didn’t. We were rusty. It’s not an excuse, but we lost that ability to transfer and want to play the ‘play’. The basis of the ‘play’ was there, but we didn’t go on with that ‘play’. It does give you a buzz to see a high level of skill (during the game) and I would suspect that we will be a lot better this weekend.

‘This weekend we’re going out to be positive, irrespective of what (London) Irish do. We can’t sit back on our heels and think ‘we’ve gotta deny Irish scoring four tries’, or ‘we need to get the losing bonus point’ and then proceed on our merry way into the Quarter Finals. That’s not the way we look at it.

‘We’ll go out to play rugby. I think Irish will probably do the same, but which way are Irish going to look at it? Will they be trying to win the game and hopefully go through as the best second placed team, or go out to try and get the five points and win the pool?

‘I suppose that both things will be on their minds, but they will see how the first part goes. I don’t think anyone can put the cart before the horse. If you look back at in days gone past where similar things happened in games in terms of qualification, to my way of thinking, you can’t look at the four tries. You look at the performance, go out and play and as things develop, they develop.

‘We’re looking at what we do, rather than what they do to be honest.

‘They’re a side who have got great counter-attacking abilities. If you give their back three a lot of space and time, you’re going to create problems for yourself. Obviously they’re a great side who have an innate ability to take intercepts and run huge distances and score tries.

‘You can’t become loose and try to play Sevens rugby against them. It doesn’t mean you can’t attack them, but we will play a controlled game, which will be very positive. Both sides want to win and we definitely want to win for obvious reasons. Not intending to be said in a nasty way, but we owe them one.

‘The boys were disappointed about what happened in the RDS, and we’re not taking anything away from Irish who deserved to win that night (in October). To be truthful, the boys would like to turn that around.’