Alan Lewis to Retire at End of Season… 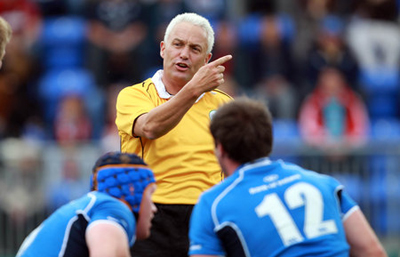 With 45 major international test matches to his credit, including a Rugby World Cup quarter final and games across the RBS 6 Nations Championship and the Tri Nations, Lewis is one of the longest serving IRFU International referees. He also holds the record for matches in European competition with an incredible 83 matches, 71 of which were Heineken Cup matches, including three semi finals and the Heineken Cup Final in 2007.

Talking about his decision Alan Lewis said, “Now just feels the right time to finish up. It’s a natural progression and one I have been discussing with my family and Owen Doyle in the IRFU over the past few months. I feel very privileged and honoured to have been involved at this level for so long. I have enjoyed every minute hugely.”

Commenting on the recent announcement of the Rugby World Cup referee selection he added, “Of course there’s a twinge of disappointment (at not being selected), I wouldn’t be human if there wasn’t. The main thing now is to wish all match officials great enjoyment and success in New Zealand.”

Owen Doyle, IRFU Director of Referees said, “What an extraordinary and successful career Alan has had and his record speaks for itself. He has always brought so much to the game, both on and off the pitch. His dedication and his enthusiasm have been unsurpassed. I am really now looking forward to continuing to work with him, albeit in another capacity. His expertise and communication skills will help enormously in developing the next generation of elite referees.”

Caleb Powell, IRFU President commented on hearing the news and said, “Alan has made an immense contribution to our game, both domestically and on the world stage. His commitment and ability serve as a real example to all those aspiring to referee at the highest level.”