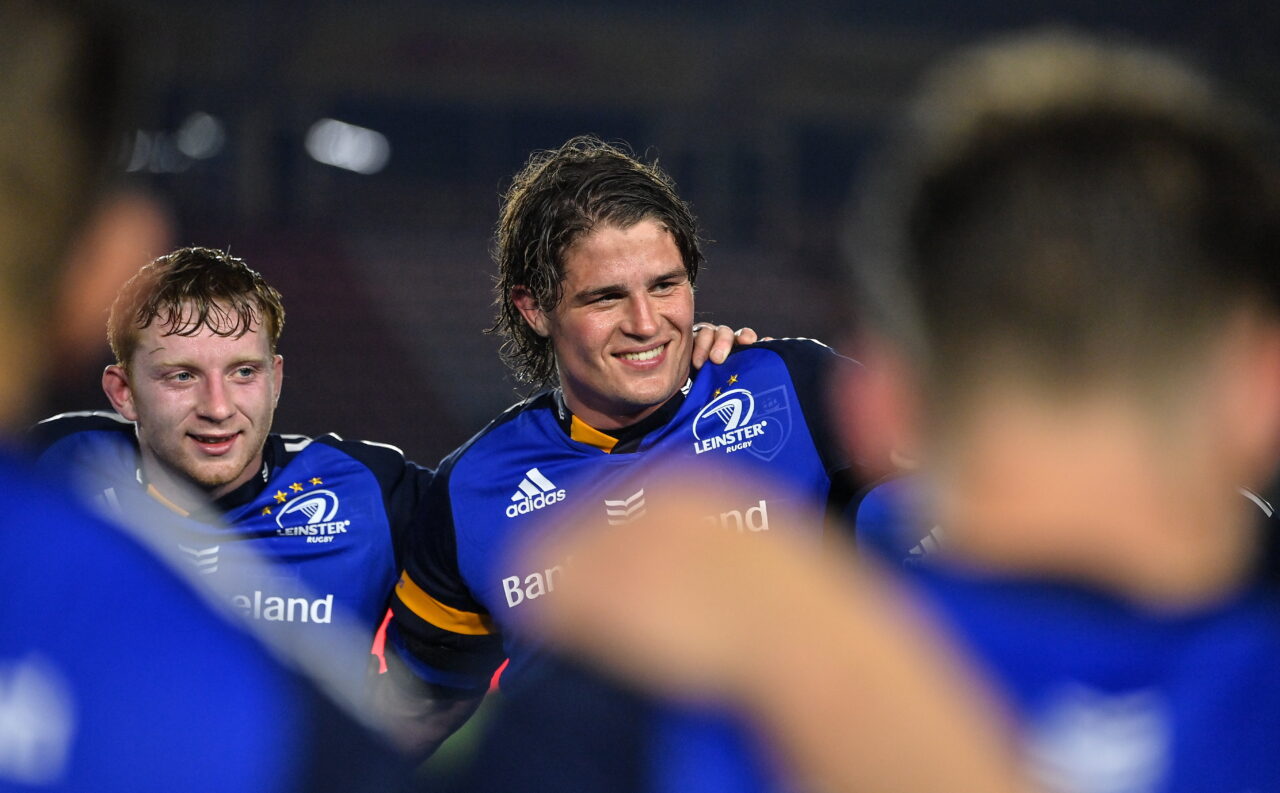 The nominees have been announced for the inaugural BKT United Rugby Championship Unity Awards which recognise the great work of players and teams within their communities and for charitable causes.

Sponsored by the CVC Foundation, the new awards are part of URC’s Take on Tomorrow campaign, which looks to inspire change through the power of rugby.

The winners of these awards will receive £5,000 from the CVC Foundation, to donate to their cause of choice (player) or to invest in their community programme (team).

The list of nominees has now been revealed, with six in each category, and with Leinster Rugby Academy forward, Alex Soroka, in the mix for the Difference Maker Award. 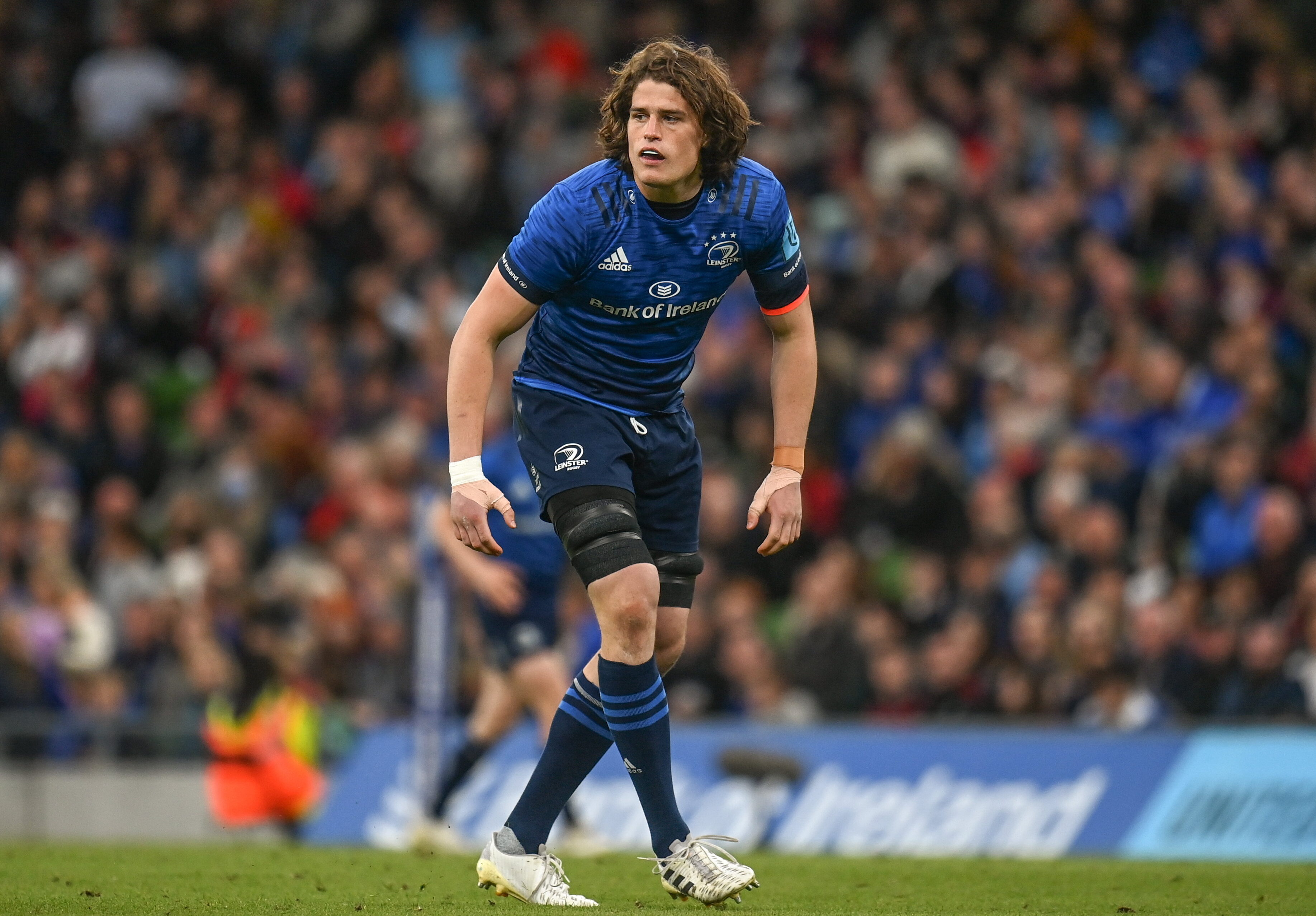 On 11 February, 2022, a week before his 21st birthday, Alex Soroka was flying high. He had just come off the bench for his first senior appearance of the season in Leinster’s 26-7 win over Edinburgh at the RDS Arena.

However less than two weeks later, his world was rocked as Ukraine, the birthplace of his brother and his parents, was invaded by Russia.

With his grandmother and lots of family and friends still in Ukraine, it has been an incredibly tough time for the Soroka family in Dublin. 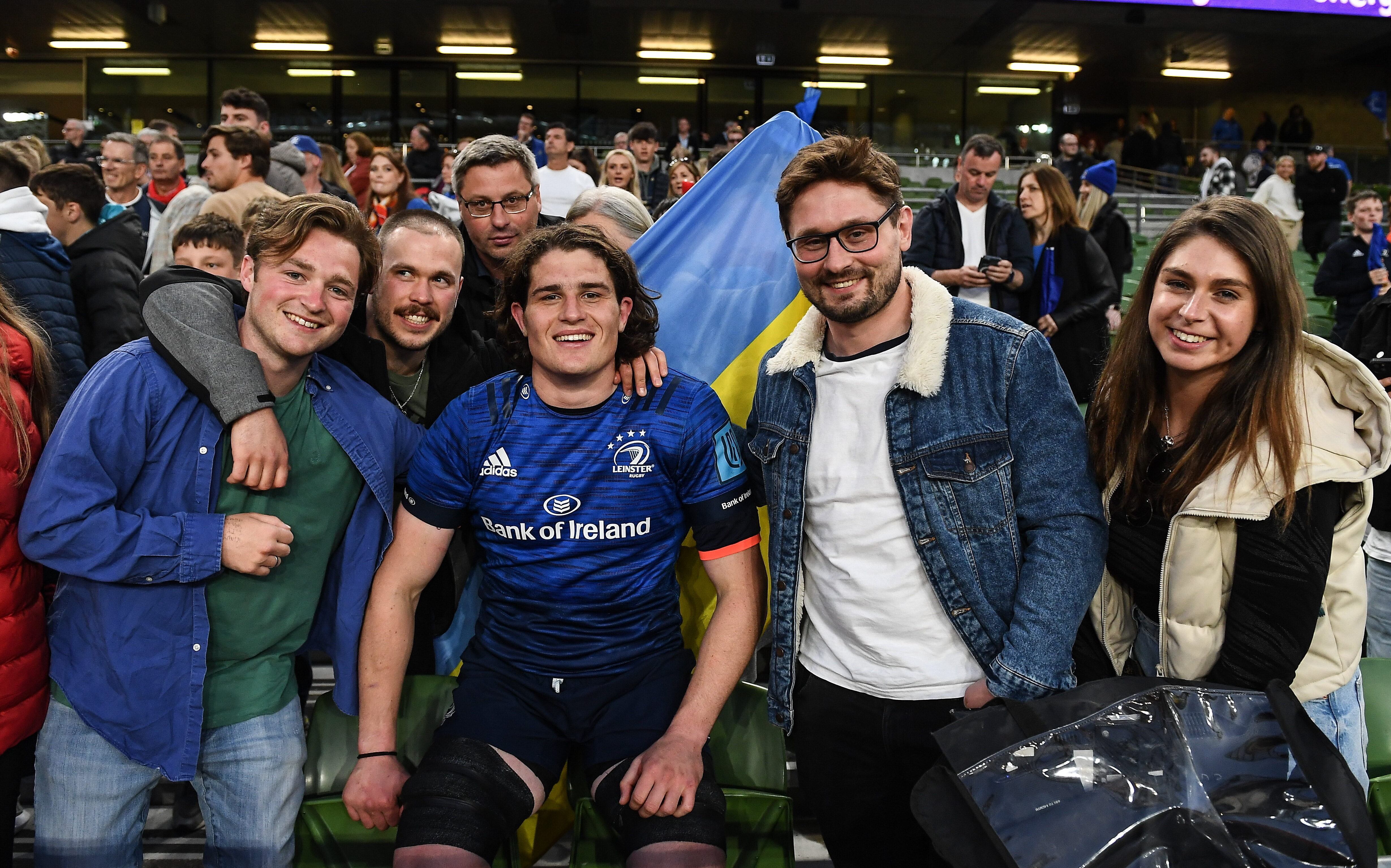 “It’s tough, but at the same time it’s not tough for me at all” explained Soroka earlier this year.

“There’s nothing wrong with me and a shell isn’t going to hit my house. Sometimes it can get to me but then I remember what they are going through in Ukraine and it’s a completely different story.

“It’s more that I feel a bit helpless sometimes, because I’m here and they are there and I feel like I can’t do much.”

That feeling of helplessness inspired Soroka to look into what might be possible and what might be achievable to help those living back home in Ukraine.

Along with his family, he started a GoFundMe page in aid of Kyiv’s Okhmadits Children’s Hospital in Ukraine, the birthplace of his brother and parents.

The Okhmadits Children’s Hospital in Kyiv was opened in 1996 and is the largest children’s hospital in the Ukraine serving over 300,000 patients from birth to 18-years.

Up to 20,000 children are treated annually for trauma related emergency injuries and close to 10,000 surgeries are performed.

Despite the ongoing war and the destruction all around, on the official website it states, boldly and proudly, that the hospital ‘is still working and still standing for life’.

Soroka and his family knew their cause. The fundraising goal was initially €5,000 but at last count had surpassed the €60,000 mark. While the campaign is no longer being promoted, it is still live and there are donations from all corners of Ireland, from all sectors, from companies, from schools, even from arch-rugby rivals.

From Cork Constitution rugby club, who donated gate receipts, from UCD RFC, from his peers at Rugby Players Ireland, from The Sheds comedy night, from Energia Ireland, from Templederry National School in Nenagh, Tipperary, from Denis Mahony Limited. 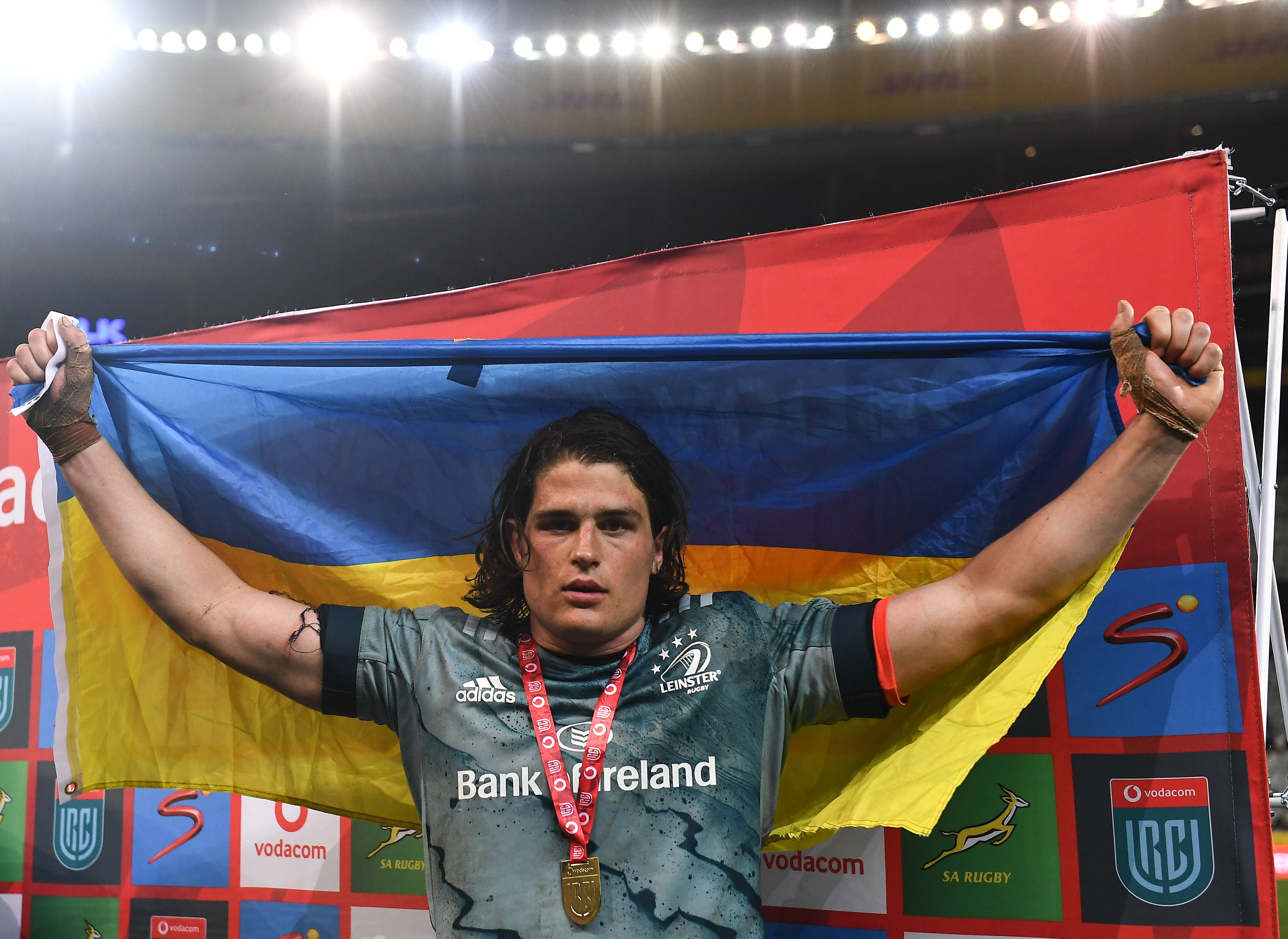 “The day I put it live, all of the Leinster players supported it and shared it across their social media pages. All my friends and teammates in Clontarf shared it too, so it got great exposure and I’m really grateful for that.

“Cork Constitution FC gave a great contribution. I had no idea they were doing a fundraiser. We played them a few weeks ago with Clontarf and Donal Lenihan came up to me after the match and gave me an envelope to add to the fund. That was really nice.

“UCD Rugby Club also gave a donation after our game last week which was really nice from them. When you see things like that, it makes you proud to be a part of the rugby community.”

It is difficult to put into words the manner in which Soroka has gone about his business as best he can, while at the same time dealing with all that has gone before, but Leinster Rugby captain, Johnny Sexton did his best. 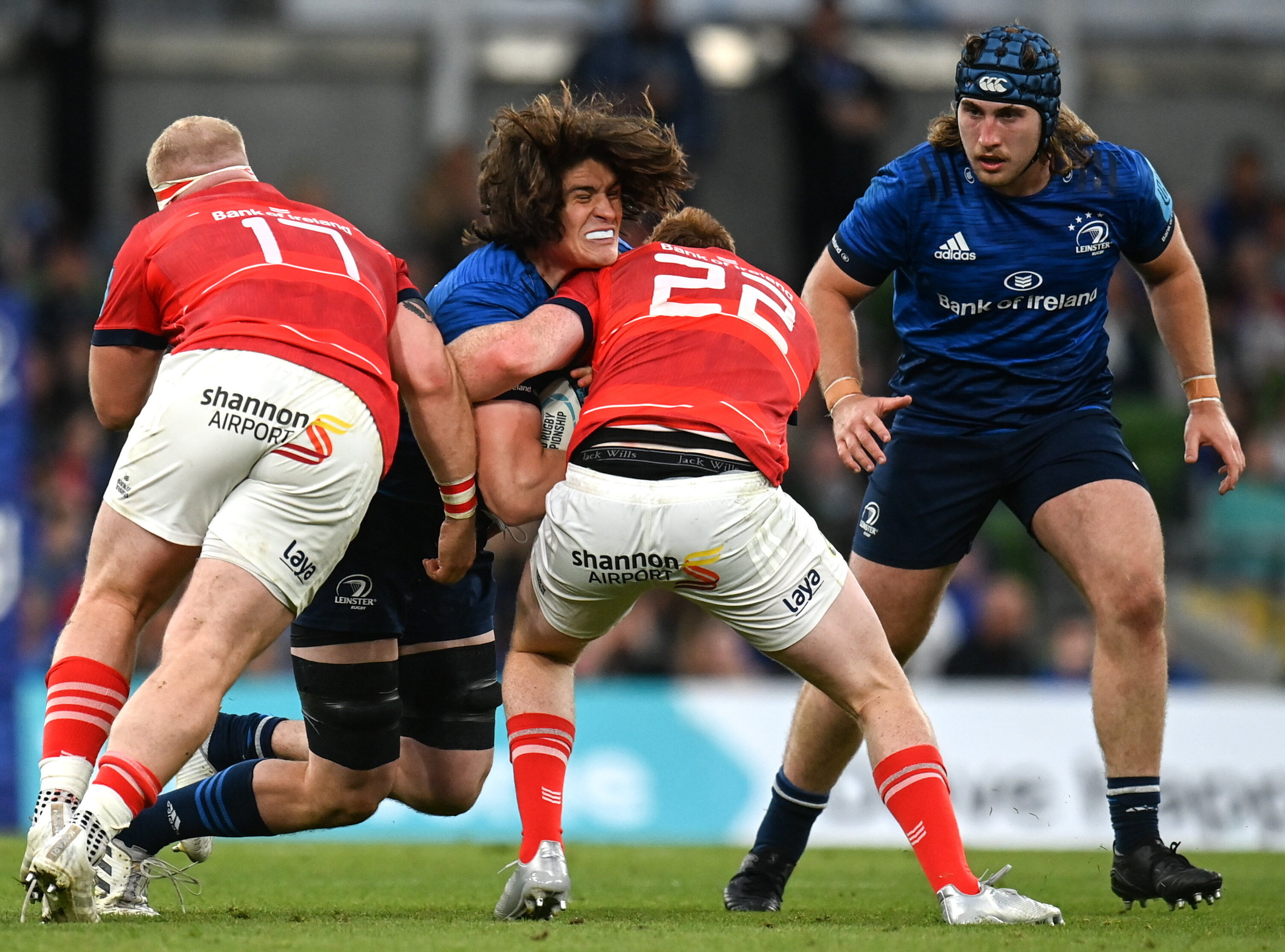 “Alex – or Lexi to us – is an extraordinary young man.

“Throughout the last few months he has carried himself brilliantly and has been a role model not only for Leinster Rugby and for his club Clontarf, but for himself and the wider Soroka family in Dublin and in the Ukraine.

“It is impossible to imagine what they are all going through and all we could do as a club was to support Lexi in the first place and then help drive awareness of his GoFundMe page.

“The fact that it has raised nearly €60,000 for the children’s hospital in Kyiv is testament to Lexi’s hard work and his selflessness as a young man. He could have kept his head down and focused on his rugby but he wanted to make a difference.

“And then you add in his performances in here training day after day, his focus when at his studies in college, and then when he has pulled on the Leinster jersey. People saw a glimpse of his potential over in South Africa and we all look forward to welcoming him back from his injury in due course.”

“We couldn’t be prouder of Lexi. He is a credit to his family and his community and we are all very proud of him in Leinster Rugby.

“As the manager of the Academy programme we constantly challenge our players to better themselves and to be the best version of themselves that they can be. We do that daily, but they are young players and you need patience.

“Nobody could have imagined the trauma that has been visited on the Soroka family over the last few months but Lexi has been an inspiration not only to his fellow players, but to us all in Leinster Rugby in how he has dealt with it all and yet still maintained his studies and maintained his performances on the rugby field.

“The outpouring of support for the cause and for the Soroka family has been brilliant to see and for as long as they need it, that support will continue to be there for them from Leinster and from further afield.

“Lexi and his family continue to be in all our thoughts.” 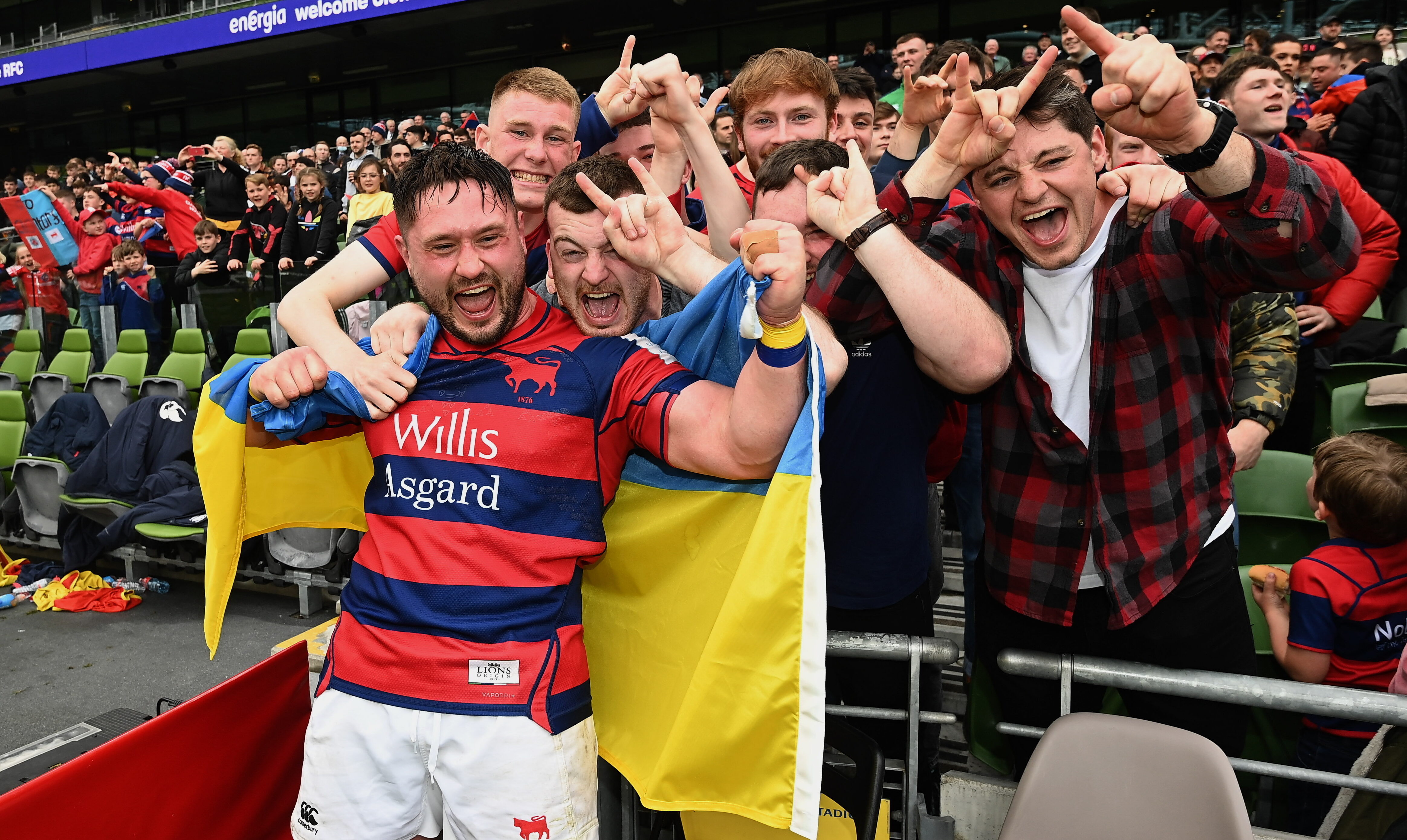 The Soroka family are still to this day a key part of the Clontarf FC family also and head coach Andy Wood had nothing but praise for the young forward and the mark his wider family have left on the club.

“Clontarf Rugby has been immensely proud of Alekseiy and his rugby journey from his time with Clontarf youths, and into the Leinster Academy and professional squad.

“In fact, Clontarf has always been incredibly proud of the entire Soroka family, with both Alekseiy and his brother Ivan, being such a massive part of the senior squad.

“The club, and the wider community, have been moved by events in the Ukraine and we became very aware of the very real stresses that befell many families in, or with close links, to the country. It was very hard not to empathise with the harshness of the conflict, particularly when we have two massive personalities sharing the senior dressing room, bearing the stress of family under attack in the Ukraine.

“Alekseiy’s parents, Tanya and Vassyl, as well as his sister Dasha are great members and supporters of the club, so we were delighted in our small way, to support the efforts of the Soroka family, who have raised significant funds for their chosen charity, The Okhmadits Children’s Hospital.”

There are no winners and losers in Awards such as this, but as a club we are extremely proud of Alex Soroka and proud of what he has achieved to date and that his work off the field has been recognised by the wider BKT United Rugby Championship family.

We wish Alex, and all the nominees, well at the awards.

The winners will be revealed on Wednesday, December 21, with the award presentations to the winning club and player taking place ahead of games in Round 10, just before Christmas.

United Rugby Championship CEO Martin Anayi said: “We are acutely aware of the fantastic community programmes that our clubs have established locally and the deserving causes that our players contribute to as well. As a league, our mission is to celebrate and highlight their successes across our platforms.”