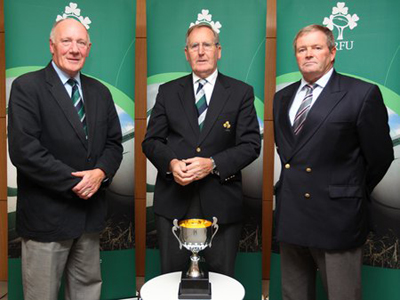 The draw was made by IRFU President, Caleb Powell and Chairman of the Domestic Game Committee, Stephen Hilditch. The All Ireland Junior Cup has proved extremely popular with clubs and supporters, attracting big crowds to all the games and fostering ties between Junior clubs in all four provinces.

2009/10 Cup Champions City of Derry used their success as a springboard to gaining promotion to the All Ireland League, while previous champions Rainey Old Boys, Navan and Seapoint have also made the jump.

Armagh, beaten finalists last season, have been drawn at home to Tralee, who are in their first season in this competition.

2008/09 Champions Tullamore have drawn Sligo for their opening game while Monivea, semi finalists last season will host Cashel in their first round game.

There are four clubs from each province with the teams from Connacht, Leinster and Ulster qualifying through their position in last season’s qualifying league while the Munster clubs are drawn from the four semi finalists in this season’s Junior Club Cup. In the first round no teams from the same province can be drawn against each other.