All The Presidents Men in DLSP.. 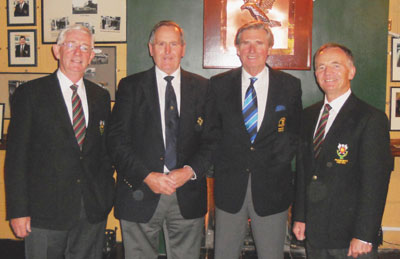 Denis Murphy is the current president for the 2010/11 season and is the 26th President since Palmerston FC and De la Salle RFC became the first two rugby clubs in Ireland to merge in 1985.

The full house listened to guest speaker, (former Irish international and rugby pundit) Mick Quinn, entertaining them with a great speech about his experiences on and off the rugby pitch.

President Denis Murphy also welcomed both Caleb Powell (the current President of the Irish Rugby Football Union) and Kevin Fitzpatrick (President of the Leinster Branch), thanking them both for taking time out on their busy schedules to attend our dinner.

He also explained how much of an honour it was to have for De La Salle Palmerston FC to have them in attendance for such an important date on our club calendar.