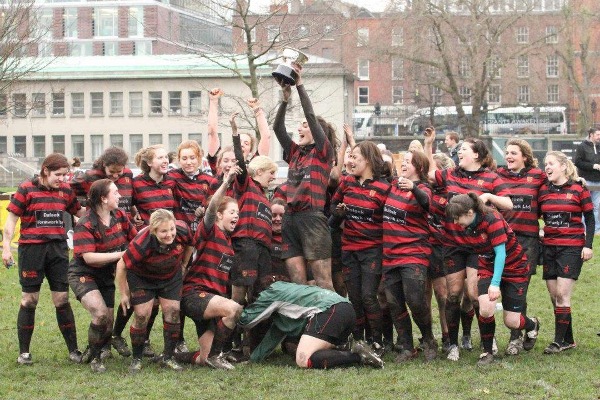 I started playing rugby a little over a year ago when I moved from Chicago, IL, to Dublin to start my postgraduate degree at Trinity…

Rugby isn’t as widely played in the States, but I had seen a few matches when I have visited Ireland in years past and wanted to give it a try. Rugby is an intimidating sport at first glance, especially for someone who had never tackled anyone before, but the team was very welcoming and I was able to pick it up quickly.

I’ve never has as much fun in any other sport. As a prop, I’m wrecked after every match, but the joy I get from making a clean tackle or finishing a well-played match makes every ache worth it. My teammates are entirely responsible for some of the best times I’ve had in Ireland. From muddy trainings and comparing bruises to post-match pints and nights out, the women I play with are strong, determined, and a heap of fun to be around. Friendship forged under the fire of an attacking forward is the best kind of friendship.

I love my team because fantastic nights out aside, everyone is deeply invested in the success of the club. This year, Ailis Egan, who props for both Leinster and Ireland, has been coaching us and our game has improved under her care. Having a Grand Slam champion be so accessible has raised our standard immensely, and for those on the team who have dreams of someday playing for Ireland, Ailis is an inspiration as a Trinity graduate.

With the growing popularity of women’s rugby after Ireland’s Six Nations success, it’s been a great year so far for recruitment and support from the IRFU and we look forward to building on that momentum.

We’re always recruiting new players and growing our fan base so please feel free to check us out on Facebook HERE.