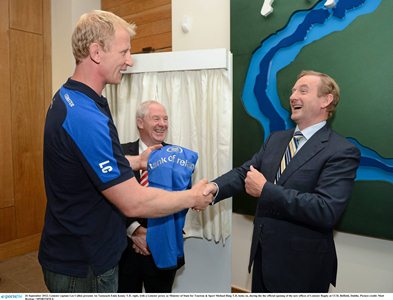 An Taoiseach was taken on a tour of the offices before joining representatives from both Leinster Rugby and the I.R.F.U. as Leinster Chief Executive Michael Dawson outlined the province’s journey to U.C.D. Mick also acknowledged the backing of David and Cathy Shubotham, Bank of Ireland Private Banking as well as Government / Lottery funding which all enabled the successful move.

Dr Hugh Brady, President of U.C.D., then addressed the gathering before An Taoiseach spoke and greeted representatives and staff , wishing the province well in the new building and expressing his hope that it will continue to inspire future generations.

Billy Glynn, President of the I.R.F.U., was also in attendance.