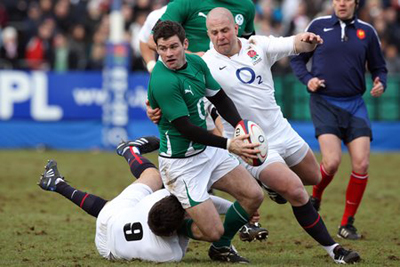 Ireland ‘A’ fell to a 17-13 defeat to the Anglo Saxons in the Rec, Bath on Sunday afternoon…

Paddy Wallace kicked the visitors into a 3rd minute lead with a penalty after a clever jinking run from Fergus McFadden. But the Saxons fought back when scrum-half Ben Youngs found the rushing David Strettle and the Harlequins winger raced in after a spell of home pressure.

Shane Geraghty added the difficult conversion to give the Saxons a 7-3 lead. But Ireland regrouped and Fionn Carr made a superb break through the English midfield. Though the attack was thwarted, Ireland’s intent was clear and in the 23rd minute Wallace added his second penalty.

England attacked within moments of the restart and a try-saving tackle from Carr prevented Noah Cato from scoring his side’s second try. But Geraghty capped off a fine backline move – which had a suspicion of a knock on- on the half hour mark to touch down. Geraghty added the point to extend England’s lead to eight points.

With Keith Matthews and McFadden linking up well, Ireland looked promising but Wallace missed a penalty as the half drew to a close and the Saxons maintained their 14-6 lead at the interval.

With Sean O’Brien and Shane Jennings inter-linking effectively in the back-row, Ireland looked ready to strike as the game approached the hour mark. Former Leinster Academy prop Paul Doran-Jones was yellow-carded in the 64th minute as Ireland looked to turn the screw and that they did through replacement Ulster back-row Chris Henry who darted from close in to score.

Wallace added the points and England’s lead was reduced to one point. But a late Geraghty penalty sealed the win for the hosts against a spirited Ireland side.