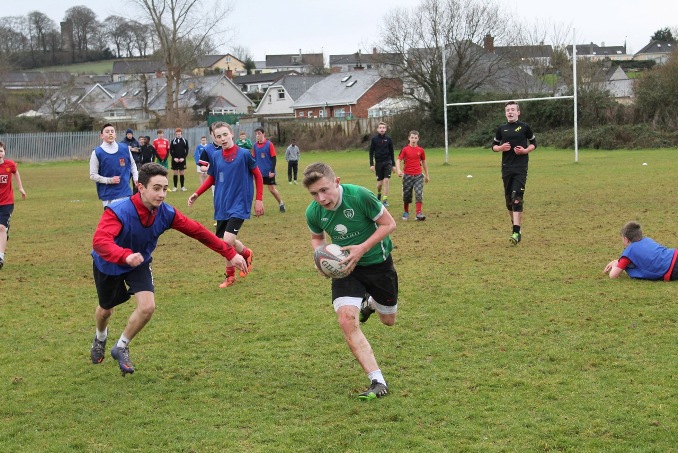 Following hot on the heels of the success of the 1st Year blitz at De La Salle College Dundalk, this time it was the turn of the 2nd Year students to show all the skills they had developed since the Leinster Rugby Programme was launched in early November, culminating in another hugely competitive blitz held on Friday 10th January at the College’s Sports Grounds adjacent to Dundalk Rugby Club.

Having seen the commitment shown to the programme by the 1st Year Students, Mr. Padhraic Staunton, P.E. Teacher at the College, felt that it would be very beneficial if the same opportunity was afforded the 2nd Year students. Dundalk CCRO Gerry O’ Hara was only too delighted to introduce the programme to the 150 students, most of whom had never played rugby before.

Again the commitment shown by all was incredible, even in what at times were the most atrocious weather conditions. It is a credit to all concerned and, it must be added, to the facilities at the College that not one single session had to be held indoors. All sessions were conducted on the pitch through hail, rain or snow, sometimes in freezing conditions.

The format for this blitz replicated the success of the inaugural blitz in that there were eight teams with eight players each divided in to two sections, Section A being: Toulouse, Edinburgh, Munster and Ulster and Section B: London Irish, Ospreys, Connacht and Leinster.

Taking in to consideration the fact that most of the students had never played rugby before, the aptitude they showed for the game and the skills they displayed were a joy to behold. The lines of running, handling and support would suggest that there are many more “Kearney’s” waiting to be developed in North Louth. While Louth may be called “The Wee County”, there was nothing wee or weak with the tackling on display with some huge hits that even “The Tullow Tank” himself Sean O’ Brien would be proud of. Again there was a total ban on kicking the ball with the main emphasis being on progression with the ball in hand.

After an exhausting three hours, the top teams to emerge from each group were Ulster and Connacht, this being the same pairing that had topped their respective groups in the 1st year blitz. The match was a real rip-roaring affair and it looked in the early stages that the bigger more physical Ulster side, who had topped their group winning all their matches, might have been a step too far for the Connacht men.

However, as if to emphasise the fact that rugby is not just about physical size but more about movement and space and the ability to recognise it, the Connacht players soon realised that a speedier tempo would reap rewards and with some hugely impressive movement of the ball to the wider areas they scored some wonderful tries eventually overhauling Ulster to win with a try scoreline of 6-4.

Leinster Rugby would again like to offer a huge thank you to all involved over the past number of months from the very progressive De La Salle College, particularly of course Mr. Padhraic Staunton. However, the biggest shout out goes to all the students, over 300, who took part in the coaching programmme on a weekly basis and especially to all those, over 130, who took part in and made the blitz’s the success that they were.