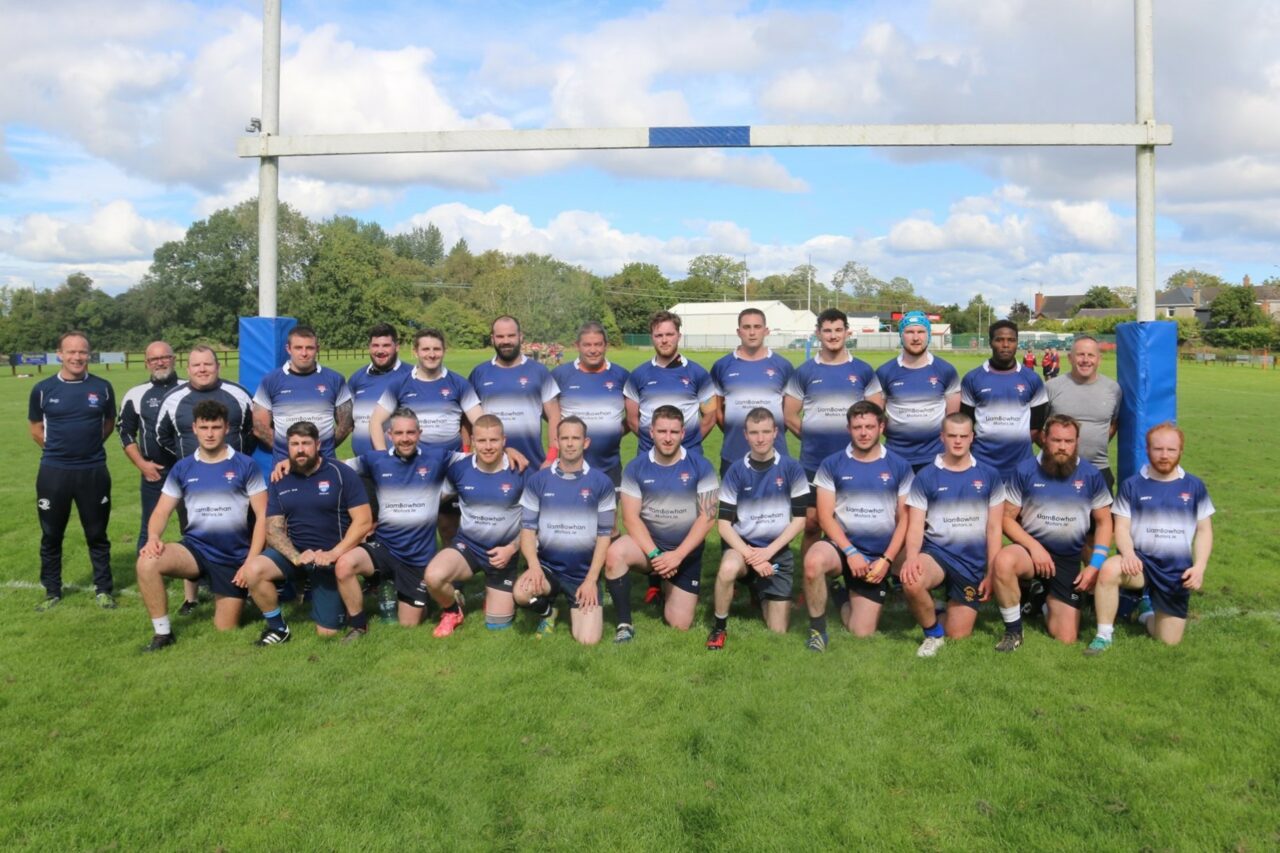 A committee was formed, headed by the first club President, P.V. McGee. Later that year, Ardee fielded an U-11 team against Blackrock, Co Louth, and managed a win.

The club operated initially from the Boys’ School in Ardee, followed by a few years in Tommy Lynch’s field in Cappocksgreen, and five years in Blakestown, courtesy of Jimmy Shannon.

The club travels stopped in 1988 when they bought the current land and buildings in Townparks, Ardee. In the years since then the club has added changing facilities, a fully-equipped gym, a clubhouse and match-quality floodlighting – the first rugby club in Louth to have night-time match capabilities.

Not the club’s only ‘first’ either. In 2005, Ardee Rugby Club was one of the first clubs in Leinster to have a female President in Susan Shekleton.

Ardee’s first adult match was a festival fixture against Athboy on St. Stephen’s Day, 1982. The team remained as a festival ‘Barbarians-type’ team for a couple of years before being accepted into the ranks of Junior Rugby by Leinster in the 1983/84 season. 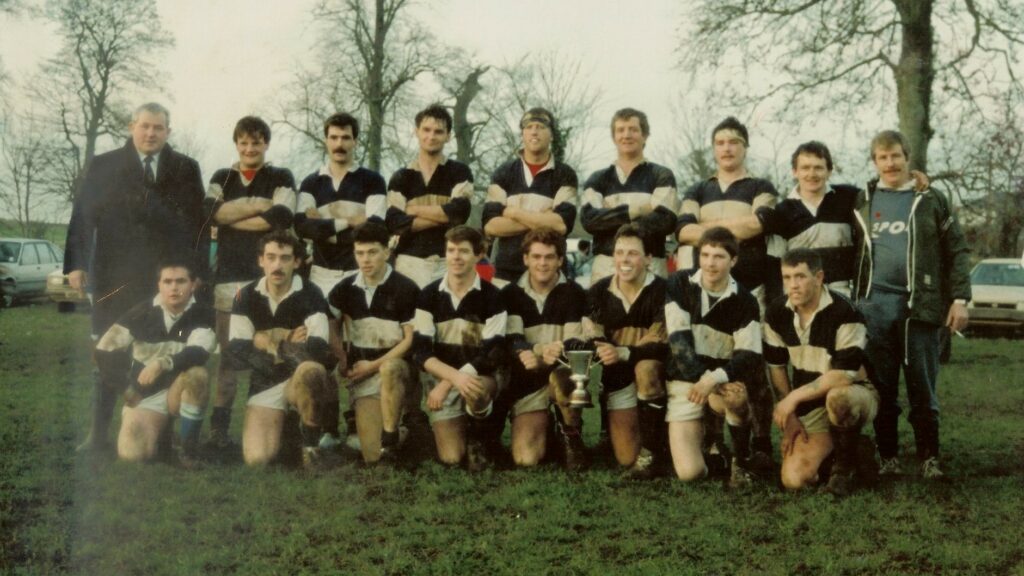 St. Stephen’s Day is still a ‘Festival of Rugby’ day in Ardee, where players past and present turn out to play a turkey and ham (and Christmas tipple) fuelled pageant of rugby, while raising much needed funding for local charities.

The spiritual Sunday post-match home for Ardee Rugby in the ’80s and ’90s was always Brian Muldoon’s in Ardee for players to follow a strict dietary regime of Chicken Curry and Pints. Often it was advisable for players to rest on Mondays as a result, and work became optional as these finely-tuned athletes began preparation for the following week’s match.

A brief period saw Ardee, at the instigation of Bernard Corrigan, undertaking biennial tours to Sterling in Scotland, to play a match on the Friday and limp to Edinburgh on the Saturday for the Scotland v Ireland match.

We have no further information on these events due to the “What goes on tour…” rule.

Ardee have enjoyed some success along the way. The seniors were Jenkinson (J2 North East) champions in 1991 and again in 2016/17. Ardee RFC men’s team have also won three Leinster Cups in the past, two at J3 (Anderson Cup) and one at J4 (Dunne Cup) Level. The Ardee Community School senior team also won their schools league in the 2017/18 season.

Ardee have had a number of players who have gone on to represent Leinster and Ireland at various age levels.

Some memorable individuals have graced the Ardee teams over the years, club legends such as Dan Malone, Gerry Moran, Jimmy Reilly – father of the Reilly siblings above – Chris Luckey, Ronan O’Brien and longest serving club member Iain McGruer, to name but a few.

It’s common for siblings to take the field in battle, and even play against each other in this professional age. Ardee have had at least two father and son combinations take to the pitch and slog it out. Gerry and Keith Moran togged out together in the 1990s, while the two Ronan O’Briens – Senior and Junior – have sweated and swore together in the blue of Ardee since the turn of the millennium.

This year paid a sad goodbye to past captain Malcolm Fowler, as well as local musician and former No. 8, Donal Halpenny. Across the water we lost another ex-player and friend Mark Whitehead.

Each year the North East celebrate the life of John (Beachy) McCreanor with North East teams all competing in a blitz for the Beachy Cup. John was a larger than life player who turned out for Ardee and Boyne over a far too short career, and is sorely missed by all, both on and off the pitch.

The year 2014 was one where most sports clubs ran ‘Strictly Come Dancing’ nights as major fundraisers for their clubs. Ardee was no different, apart from the men’s team invading the stage and performing an impromptu rendition of the All Blacks “Kapa-o-Pango” – the relatively new haka performed by the All Blacks before their more meaningful test matches.

Impromptu of course, as the players only spent about six weeks training for it in the club gym, advised by the local Maori ‘expert’ who would return this season as CCRO.

In 2019, the club invested heavily in their grounds, and major works on the pitch saw Ardee playing all of our home fixtures away from home.

Thanks to the kind support of such clubs as Dundalk and North Meath, who allowed us to host our ‘home games’ at their grounds we were able to give our new playing surface the time it needed to bed in.

Little did we know that an enforced break in 2020 would give the pitch all the time it needed to complete its recovery.

The club has had a few Presidents who have managed to get themselves back into the role after stepping down. Iain McGruer, Paddy McDonnell, Fred Matthews and Ronan O’Brien all found it hard to escape the Presidential role and all endured two stints in charge.

This season though, long-time club man and Leinster referee Mick Lennon has been elected for a third time as club President, having stood down from the role twice before.

Unlike a certain politician on the other side of the world, it seems that Mick is unable to escape from the Presidential role.

The club has a new CCRO, Ian Stewart, who returns to a coaching role in Ardee RFC after arriving 26 years ago as a ‘blow-in’ player-coach. Ian is currently bringing the Play Rugby Programme to local schools and is looking to build on the hard work done before by previous CCROs Jessica Myles, Liam Mullane and Ronan O’Brien.

This year has been a challenge, with only a handful of games getting played across all age groups before Level 5 put a stop to it.

The problems of the world have also put paid to any real 40th birthday celebrations for the club, but they’re working hopefully towards something special when the time allows.