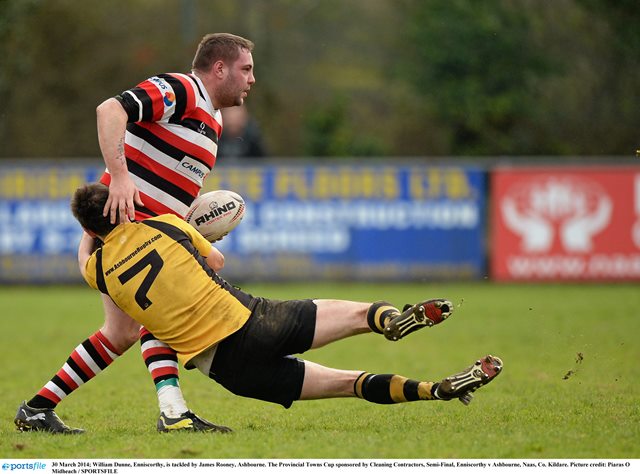 For the second time in its history Ashbourne RFC have a made a Provincial Towns Cup final, sponsored by Cleaning Contractors when they defeated Enniscorthy in a tough and nerve jangling semi-final at Naas RFC yesterday…

The last time they made the final was in 1999 and so a 15 year wait will end up with them taking the field in Tullow RFC on Sunday the 20th of April when they take on Kilkenny RFC.

It was a tough encountered and captured everything that the Provincial Towns Cup has to offer. There was tension, bodies on the line, big decisions made and little scoring as both teams gave it everything. Enniscorthy took the lead after 10 minutes when they broke out to score the only try of the game and it looked as if they had weathered the early Ashbourne storm. But the Division 1B side worked their way back into the game with two well taken Paul Morris penalties. At 7 points to 6 the game was poised to go either way, but in the 30th minute a red card to the Enniscorthy loose head possibly proved to be the change changing moment.

Enniscorthy showed all their experience and ability and responded well to his and pushed on to score a penalty on the stroke of half time to lead at the break by 10 points to 7.

Ashbourne started the second half well and took the lead with two more Morris penalties to take the score to 12 points to 10 within 8 minutes, and that is the way it remained till the end, but there was plenty of action. Bodies were put in the line by both sides and their chances for both teams, but the lines were impenetrable and discipline was excellent.

Ashbourne made it to their second final but what an effort. Enniscorthy were magnanimous in defeat and played their part in an epic game of Towns Cup rugby. Ashbourne will march on to Tullow to meet a worthy opponent in Kilkenny, where another great game is in store.

Kilkenny Firsts secured their place in the 2014 Provincial Towns Cup final by seeing off a tough and very physical Wicklow side on Sunday in Tullow. Conditions were soft underfoot which prevented both teams from experimenting with the ball, and as a result things were kept very tight indeed.

Wicklow started proceedings and it was clear from the outset that they meant business as the Kilkenny ball gatherer was hammered by a tidal wave of red and white jerseys. Kilkenny were awarded two opportunities to take the lead in the seventh and ninth minutes however a rather nervous Willie Wrights missed both attempts at goal which fell short and wide respectively. Both teams tightened their defences and it was stalemate for the next twenty minutes. Kilkenny forwards, led by their formidable No.8 David O’Connor kept trying to break down their opponents defensive lines but all credit to Wicklow they defended superbly and drove Kilkenny back off their lines repeatedly.

A somewhat nervous but determined Kilkenny pack regrouped and hit back and it was only a matter of time before a crack would appear. With thirty two minutes played, that crack finally appeared and Kilkenny’s outside centre, Philly Walsh, was more than willing to receive the ball and crash over the line to open the scoring. Wrights conversion attempt fell just short of the target. Kilkenny’s defensive strength and strict discipline denied their opponents any scoring chance in the first half leaving the score at the break in typical Cup tie fashion 5-0 to the rugby “Cats”.

Kilkenny restarted the second half, and things remained the same until the final fifteen minutes with neither team surrendering an inch to the other. Wicklow’s outhalf, Stephen Duffy, missed a chance to reduce the deficit six minutes into the half and Wright missed a chance to extend Kilkenny’s lead in the sixty-fifth minute.

Kilkenny quickly realised that the only way to win this game was by scoring tries and they shifted up the gears and increased the pressure on Wicklow. Wright repeatedly kicked Kilkenny deep into the Wicklow half and Kilkenny set up camp on the five-metre line. Following repeated attempts at breaking the Wicklow line, scrum-half Robbie Walsh spotted a way through and using his great strength and agility shrugged off the attentions of his opposite number and scored under the posts.

A huge cry went out from the Kilkenny fans as Wright added the conversion giving Kilkenny a 12 point lead. Wicklow were not finished and with approximately ten minutes left on the clock Wicklow found new gusto and set the game alight. From the restart, Wicklow hit Kilkenny with everything they had. Kilkenny were out on their feet but they defended with everything they could muster up. The pressure was too much and as the ball sailed out along the Wicklow backline, Kilkenny heads dropped as the winger Ben Armstrong used the overlap to his full advantage and touched down. Duffy added the conversion.

A valiant Wicklow team fought on to the bitter end but it was Kilkenny who emerged victorious. Full credit must be given to both teams for their sheer determination and never-give-up attitude. They entertained the fans from both sides with some stunning rugby and heart-stopping moments.

Kilkenny now face Ashbourne in the final which will be held in Tullow RFC on 20th April at 3.00pm.

Both these teams are no strangers to each other having already met twice this season in the Leinster League. Ashbourne, who were recently crowned league champions, beat Enniscorthy 12-10 in the other semi-final, in what was a very closely contested game. Ashbourne who will be favourites going into the final will have all the work to do to maintain their unbeaten record this season. Kilkenny are an equal match for the Meath men and with Kilkenny going in search of their sixth Towns Cup, this promises to be a thrilling encounter.

Check out all the photos from the two semi-finals of the Provincial Towns Cup here.