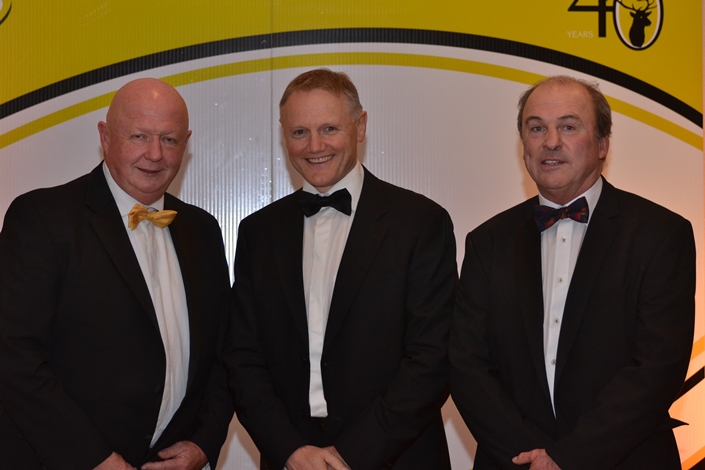 Ashbourne RFC staged its 40th Anniversary Gala Ball in the Pillo Hotel in Ashbourne last Saturday night, which was attended by over 320 people…

It was one of the main events in the 40th Anniversary celebrations. The attendees spanned the clubs history with people there from the 1974 founding crew to the current membership. All parts of the club were represented. The Pillo Hotel was the venue, which has a strong tradition in working with the club with the various international sides that pass through Ashbourne RFC.

The main speakers were current club President Pat Rooney and the 1974 President Tom Higgins who link the 40 years nicely. Tom now lives in Sligo but his involvement in the initial years in Ashbourne, were important to him and to the club.

The club also found a very important link through the Irish team with Mick Quinn and Johnny Moloney attending from the 1974 team, the forgotten 5 Nations winners, and Joe Schmidt current Ireland coach, who led Ireland to success in 2014. Both address the gathering and were inspirational with their words. The 1974 Irish team would have been an important element in the foundation of the club, with many of the original members relocating from Dublin.

The club original was a member of the Metro Area and remained so until 1998, when it joined the North East Area. The club felt it important that it become part of the provincial area representing the town and community of Ashbourne. It was fitting that in 2014 the club won the Provincial Towns Cup which is the Holy Grail for all provincial clubs, and it being its 40th year was even more fitting.

Mick Quinn also represents the IRFU Charitable Trust and the event raised over €;2,000 for the charity which supports seriously injured players and it was a fitting charity to associate with the night and something that all clubs should help with.

Joe Schmidt gave us an insight into his way of thinking. He relates well with the club in a provincial setting and how important that club is to its members. He held the crowd enthralled with his words and he had time for everybody.

The club also took the opportunity to present Honorary Life Memberships to Rod Cosgrave and Bill Duggan for their work for the club over the years.

Louis Magee, President of the IRFU, John Glackin, President of Leinster Rugby and his Senior Vice President, Robert McDermott were also in attendance, and both the IRFU and the Leinster Branch have given continuous support over the years to the clubs development.

It was a proud night for the club and for Leinster Rugby.