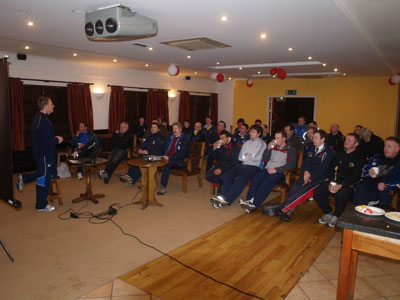 Colin O’Hare (Coaching Development Officer for the North East region) expressed his delight at the attendance level given the weather on the night.

“This all aids towards increasing the individual skills of the underage players in the area – an expressed aim of ours – while also the coaches get increased knowledge”, he said.

The North East development squad backs, augmented by players from Skerries and Dundalk (pictured) were used for demonstration purposes and in thanking them Colin praised them on their skill levels.

“A session like this can lose value if the players do not possess the requisite skills, but they acquitted themselves very well”.