Ashbourne promoted to Division 1A in Leinster League… 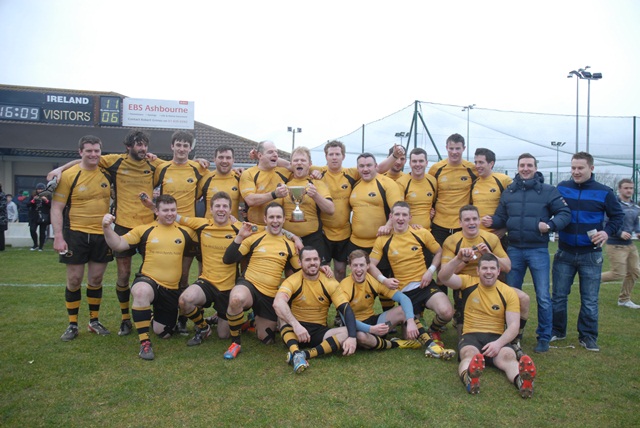 Ashbourne RFC secured the Leinster League Division 1B and promotion to Division 1A, maintaining their unbeaten record in the league with their 13th win in the league…

A hard won victory (11ponts to 6) over neighbours Malahide secured the title. This was the first silverware for Ashbourne since 2007 when they last won the old division 2. The club is now unbeaten in its 15 games in Leinster competition this season and will travel to Kilkenny next week to finish its league programme.

The team is led by Rory Gleeson and he thanked the coach team of Wayne and Scottie and along player coaches Jeff Mahon, playing his 26th season in the Leinster League and paul Morris. A panel of 30 players has been used and all were part of this great success for Ashbourne.

We also had three brothers from the Kennedys, Shane Eoin, Keith and Gavin, while President Pat Rooney had sons on the team, Mark and James. The team mainly locally based with many such as Rory, James McCaghy, Darragh Curran and Kennedy’s all coming through the youth’s system.