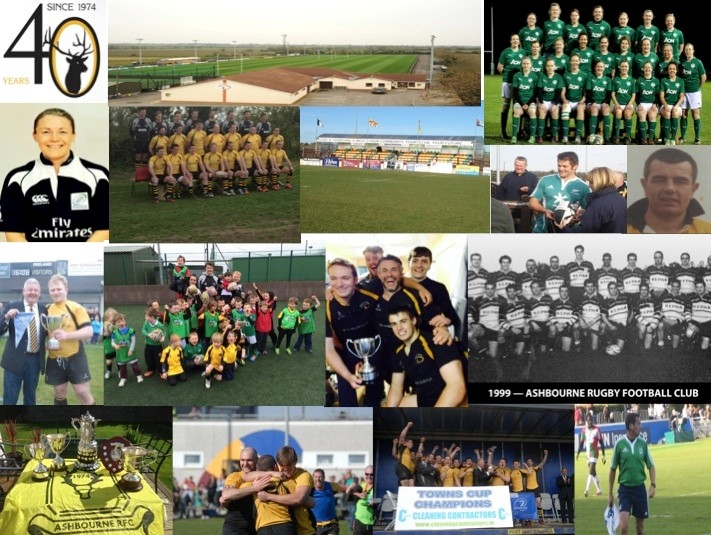 Ashbourne RFC, based in Co. Meath, is celebrating its 40th anniversary this season…

In 1974 when the first meeting was held in the The Hunters Moon to lay the foundations for the club they would not have imagined that the club would get to where it is now. Tom Higgins was the first President, and two of the ‘founding fathers’, Peader O’Kelly and Jack Conlon are still active in the club today.

In 1974 it was a different time! You could buy a pint for 35 cents, we still had the old Irish Pound, inflation was at 16.98% as against 0.39% today and Waterloo from ABBA won the Eurovision. However, some events in 1974 have been mirrored in 2014.  Kilkenny won the All Ireland Hurling Championship, Dublin won the football and West Germany won the World Cup! 1974 was a great year for Irish rugby too as we won the 80th 5 Nations that year. Now in 2014 Ireland again win the 6 Nations Championship 40 years on!

To mark the 40th anniversary of both the club’s foundation and the 5 Nations victory Ashbourne are holding a Gala Ball in The Pillo Hotel in Ashbourne on Saturday November the 1st. The club is delighted to have Mick Quinn and Johnny Moloney from the 1974 team as guests and they are also representing the IRFU Charitable Trust.

Mick Quinn will still say it was the forgotten team of Irish rugby but Ashbourne won’t forget them, as it was part of the reason for their foundation. The club is also delighted to welcome Joe Schmidt, the successful former Leinster coach and now the 6 Nations Championship winning coach with Ireland who will join the club for their celebrations.

Between the old and the new of Ashbourne and this connection between the successes of Irish Rugby (and of course Leinster Rugby), a great night is expected. The club will also have a number of the Albert O’Connell Cup side from 1978 in attendance. Ashbourne are still the only junior side to win this cup!

Ashbourne RFC is a community-based club and has over 600 members from mini’s through youths and into the adult section and works to provide a child safe and friendly environment for all members. It has also girl’s rugby and is looking to re-develop its women’s team. The club moved to its current location at Milltown House in 1985 and has invested heavily in its facilities on its 13.5-acre site, which are some of the finest in Leinster.

It has been home to Ireland’s Women’s team for a number of seasons and played a big part as #FortressAshbourne in their 6 Nations win. The 2013 wins against England and France at Ashbourne will live long in memory of Ashbourne people only to be topped off by the lifting of the cup in Italy a few weeks later. They were magic nights.

The club has also hosted other Ireland and Leinster teams and even had the All Blacks out for a few training sessions. The club is currently building a 3G all weather pitch to complement its other three pitches, which the club hopes to have on stream by mid 2015. The club is also delighted to host the Leinster V Ulster Junior Interprovincial on May 16th 2015.

Ashbourne RFC are proud to be part of the community of Leinster clubs and the words displayed over one of the club stands sums up the club ethos: ‘Rugby at Ashbourne is about your community, your club, your future’. Their plans to celebrate their history while developing for their future prove that the driving forces in the club will live up to that moto.

Best of luck from everyone in Leinster Rugby!