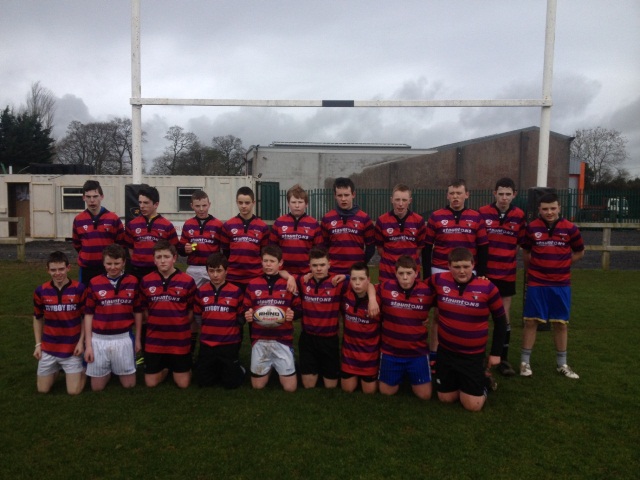 The team have taken training to new heights with training numbers over 30 players both evenings after School in Athboy RFC.

The completion is ran by the Leinster CCRO (Club Community Development Officers) in the North East and both Scottie Broughton (Ashbourne)and Fergus O Boyle(Athboy) were on hand to guide and coach both teams. Athboy CS team is made up of a split between 1st Years and 2nd Years all hoping to compete in next season in Leinster Junior Competitions. The team had 8 players that never played the game of rugby, but over the past 4 months have worked hard under the direction of Leinster CCRO Fergus O Boyle.

The game against Ashbourne CS didn’t go according to plan but the experience each player got vital in progressing the squad into Leinster Junior Rugby next September. Ashbourne CS to the early led and pushed hard in the opening 15 minutes to secure 3 well worked trys.

Athboy CS regrouped at half time as the weather conditions deteriorated and Luke Dalton was on the receiving end of a quick penalty on the 22 and crashed over for Athboy only try of the match.

“The players are committed and enthusiastic to play the sport and are a great bunch of players to coach, they are keen to learn the sport and have shown huge potential already in their early career. We introduced rugby to them last November and they are just getting to find their positions.

Tuesday was a tough opening match with so many new to the sport it was great to see them did deep during the match , gather and compose themselves and play with a huge amount of confidence . ” Leinster CCRO Fergus O Boyle also added “It’s a credit to see the players turn up to every training season, We have been working on decision making and handing and it was evident on Tuesday, We have still lots to improve on but we now have a strong platform to build off. “ Best for Athboy CS was Luke Dalton, and Adam Brady had a solid performance and scrummed well all day.