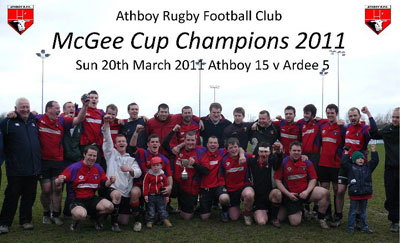 Athboy were slight favourites going into the final having only lost once, their first game, all season and also having registered two tight wins in the league phase over their Louth counterparts. But where Athboy had a tough semi final victory over Navan RFC, Ardee had the opposite with a 57-0 victory over Balbriggan RFC, so their tails were up and they also drew confidence from the fact that they were the only team that Athboy hadn’t scored a try against all season.

Both sides started well but it was Athboy who had the first chance to break the deadlock after they were awarded a penalty on the Ardee ten metre line following a big rolling maul drive that was dragged down by the opposition. Flanker Enda Reilly stepped up for the kick and was very unfortunate to see his effort coming off the post. Ardee had the next chance to get a score but they too missed when their full back dragged the ball to the left and wide of the uprights. Athboy dominated possession for the remainder of the half but mistakes kept creeping in at important times which cost them valuable scores.

Athboy knew that if they could just cut out the errors they were making in the first half the scores would come in the second, but it was Ardee who scored first with a try less than a minute into the second half. Athboy kicked off to restart the game after half time, the visitors secured the ball and hit up the right channel, with the openside covered the Ardee scrum half spotted that there were just two forwards on the blindside and he made his break, he exchanged passes with his winger and dived over in the corner for the opening score of the match with the conversion missed to the right. This was the wake up call that Athboy needed, and they struck back with a try of their own within six minutes of conceding. Athboy won a penalty in their own 22 which was kicked into touch on the ten metre line by outhalf Alan Fox , the Athboy pack, which had dominated the Ardee pack in scrums and mauls all day, secured the lineout and drove a maul into the Ardee half.

Ardee under severe pressure collapsed the maul and from the resulting penalty Fox again found touch this time five metres out. The pack, again did what they do best, secured the lineout and drove over the line and when all the bodies were cleared away it was Number Eight Mickey Casey that emerged with the ball in his hand. Reilly then stepped up and slotted the conversion over from an acute angle and Athboy were in the lead 7 points to 5. Athboy started moving the ball through the phases, regularly putting seven, eight or nine phases together and their ability to produce controlled, measured rugby at certain stages was a huge factor in their victory. It was also an element in explaining how they managed to carve out their second, and decisive try after 65 minutes.

Athboy won a penalty in midfield. Again, in what was another demonstration of their confidence in their pack, Fox went for a line-out finding touch about 25 metres out. There followed a series of hit ups as Athboy inched forward. Casey, Cathal Dempsey, Fox, JP Matthews and Trevor Murray were all involved. So was Seamus Potterton who had just come on as a blood substitute for Reilly. He made ground, the ball was popped up to Stephen Lee, by scrum half McGivern, who pumped his legs and drove over from about eight metres out. Reilly narrowly missed the conversion, but he had, minutes earlier, taken a blow to the face and he eventually left the field with blood streaming from his nose.

Displaying their guile and experience Athboy closed out the game with Fox neatly knocking over a penalty from close range to put the issue beyond doubt and leave the final score 15 – 5.

It shows the growing stature of this club and the strength in dept the squad has that having had seven players from last years winning team either emigrate or retire, they were able to secure the cup for the second year running. It also shows that rugby has now not only taken root in the community, but is starting to flourish in Athboy, and this was demonstrated by this impressive win on Sunday.

On a negative note, Athboy’s PJ McGauley sustained a broken arm on the stroke of full-time and Athboy RFC would like to wish him a speedy recovery.

Athboy now turn their focus to the Anderson Cup and a first round match in which they host Cill Dara RFC on Sunday the 3rd of April at Townspark, Athboy with Kick Off at 3pm.