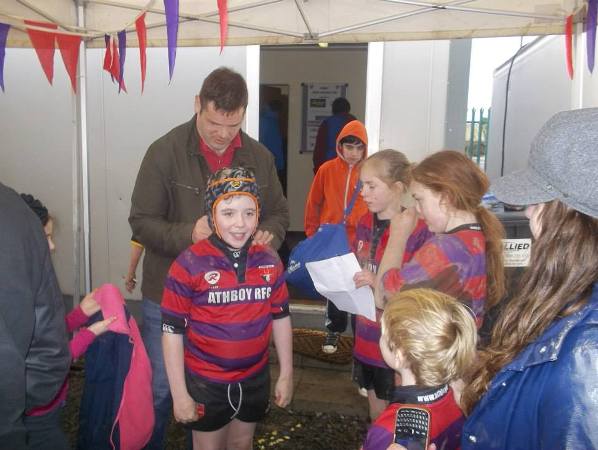 The consisted of a series of matches all players in the club from Under 7 to both senior teams. The day also marked the official opening of the clubroom.

The day kicked off at 11am with the under 7 & 6 involved in the North East blitz against Ashbourne RFC and Boyne RFC. Despite the heavy rain coaches Monique Freeman and Ian Jenkins were on hand to guide the clubs youngest players during the matches. Athboy RFC XV2nd were up next and following a new jersey unveiling , sponsored by Cleshar , Trimfold ,All About Landscapes, DC Contracts and Cabinpac . Athboy RFC XV 2nd Vs Ratoath XV1st in the J3 McCup, saw a trilling encounter in the first half that saw both team competitively contests for every inch of the heavy mud in Athboy.

The half time score was 3-7 to the visitors but it was Ratoath that push on in the second half with a few well working training moves that saw them secure the win and pick up a winning bonus point to secure a position playoff position in the McGee Cup. Best for Athboy was scrum half Joe Mc Givern and open side flanker Ciaran Cullen .Athboy XV2nd have 3 remaining fixture in the McGee Cup and they are entered into the Michael Dune (4th) Cup . Next Match is a home a game against Ashbourne RFC on Sunday 16th March.

The under 11s & Under 9 hosted Navan RFC in a series of games that saw both teams play very strong running rugby . Athboy under 11 have been coaches by Owen Flynn, Alan Ledwith, LJ Lee, Liam Cunningham over the past 2 years and had a huge turnout. 29 players attending training on Saturday morning in preparation to the day’s events. Athboy under 9 have been coached by Pete William Owen Kerrane and Michael Hesnan and have worked incredibility over the winter months with their squad of 26 players.

The official opening of the clubroom took centre stage as the Athboy XV1st warmed up for their final Leinster league match against visitors Edenderry RFC. The clubroom was a result of hard work the club has done on the ground over the past 12 months. Club President Michael Brogan thanked all involved, from Club Captain Ian Douglas to the clubroom committee Anthea Kerrane and Carla Peelman. The club room was officially opened by Ireland and Leinster Prop Mike Ross and former Club President Raff Warner who also prised the hard work of all the volunteers. Leinster Branch President and Vice President were on hand and congratulated the club on such a millstone in the club history and saw firsthand payers of all age’s participation in rugby and special congratulated the club as a provincial backbone to Leinster Rugby.

Players from all clubs that attended the day had a meet and greet with Mike Ross who was on hand to sign autographs all evening. Mike Ross presented the club with his Ireland Jersey fresh out of his kit bag returning from an Ireland training session in Belfast.

The Leinster League final game this season saw Athboy XV1st take on Edenderry XV1st in the final processing of the day. As kick off approached the weather graced the spectators with much need sunshine. The game was heavy contested in all aspects of the park. Edenderry got the scoreboard moving with early penalty scores but it was Athboy that finished the half with controlled rugby to trail at the half 3-6 .

The second bought much the same competitiveness as both teams wanted to finish the league season with a win, Edenderry taking the spoils on the last encounter. Athboy push hard in the second half but an interception on the half way line gifted the visitors 7 points , as Athboy continued the chase the games they controlled and dominated the second half but it was the visitors that finished 3-20 win.

The day was enjoyed by all and one that will go down with fond memories.