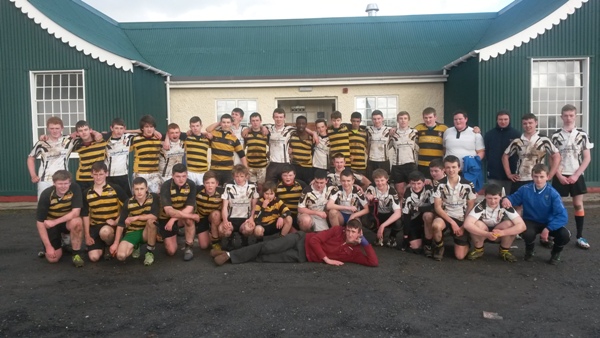 The two sides played out a 26 point draw in early February but it was the Bagenalstown school who progressed to the next round after they dominated the first half scoring three trys to lead at half time 17 -0 .

Michael gardener opened the scoring with a clever break from scrum half to score a try in the corner this was quickly followed from with a trys from Jamie Mc Cabe and Martin Bridges with one conversion added by Tommy McDonald .McDonald had a solid game at out half with some fine kicking from hand in behind the Carlow team keeping them pinned back for most of the first half.

Presentation Carlow hit back after half time when a speculative kick from prop Sean Aston found space the Presentation captain Tommy Dunne collected the loose ball and stepped outside the last defender to score a try to keep his side in the game .
The Carlow town team battled hard with good carriers from forwards Alex Holland , Adam Adabad , Stephen King but stern Bagenalstown defence held them out and the game finished with the try of the game from Bagenalstown winger jamie Condron after some good handling from the back line .

The schools are taking part in a Ty rugby programme run by local Leinster CCRO Wesley Whitten , who can be contacted via

if you are interested in playing rugby in the Carlow area .