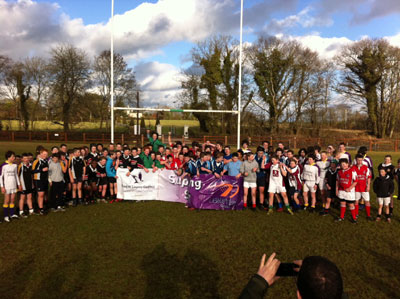 All the schools present are currently playing rugby at Leinster Development cup level or have aspirations to reach that level.

The day was made a great success by the 128 players that enjoyed some great 7’s rugby. The aim of the series of 7’s blitzes held in Fingal is to better develop the players and schools that struggle to field 15 aside teams at that age group, but have players that need to be catered for.

The local club Community Rugby Officers were on hand too help with arrangements on the day and also referee.

Leinster Rugby and Fingal County Council will be running another blitz in March, should your school like to enter please contact Community Rugby Officer Christian Stemmet on 087-9118642 or e-mail christian.stemmet@leinsterrugby.ie