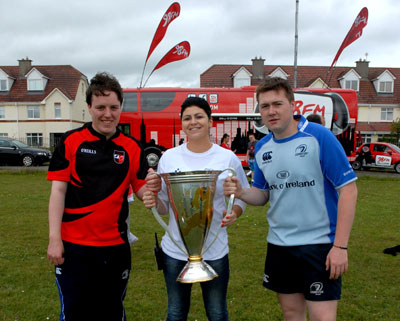 Trinity Comprehensive School was recently the venue for the First Annual Ballymun Adult Tag league. The competition was the first of its kind in the area and was also being used as a fundraiser for the youth teams in the local club, Unidare RFC. It was a great success with teams from the community, schools and local companies getting involved.

Over 300 euro was raised for the youths who were on hand every night to help out the teams and also with the running of the League. After the final night of the league the teams had a presentation night in Matt Weldons on the Ballymun Road, also main sponsor of Unidare, they were very accommodating and provided food for all the competitors. The Chairman of Unidare, Kevin Furey, Presented the winning team, JR Bootcamp with the trophy, who also had the player of the tournament in Sue Robinson, who was a stand-out performer with her lethal try scoring skills.

A tightly contested Final saw JR bootcamp take on Ballymun Regeneration Limited and with both teams drawing at full time, extra time had to be played, with JR Bootcamp prevailing. All the games were played in the best spirit with the emphasis on enjoying tag rugby and keeping fit.

The rugby continues over the summer with a Youths summer camp from the 25th to 29th of June, and a minis summer camp from the 2nd to the 6th of July. It has been a great year for rugby in the area, with a visit from Leinster Players earlier this year, Unidare taking up residence in Balcurris Park, and an increase in children playing in local schools, the future is looking bright for rugby in Ballymun.

For Details about the summer camps or any information regarding rugby in Ballymun, Contact Colm Finnegan, CRO for the area, on 0877692257 or cfinny1@yahoo.co.uk