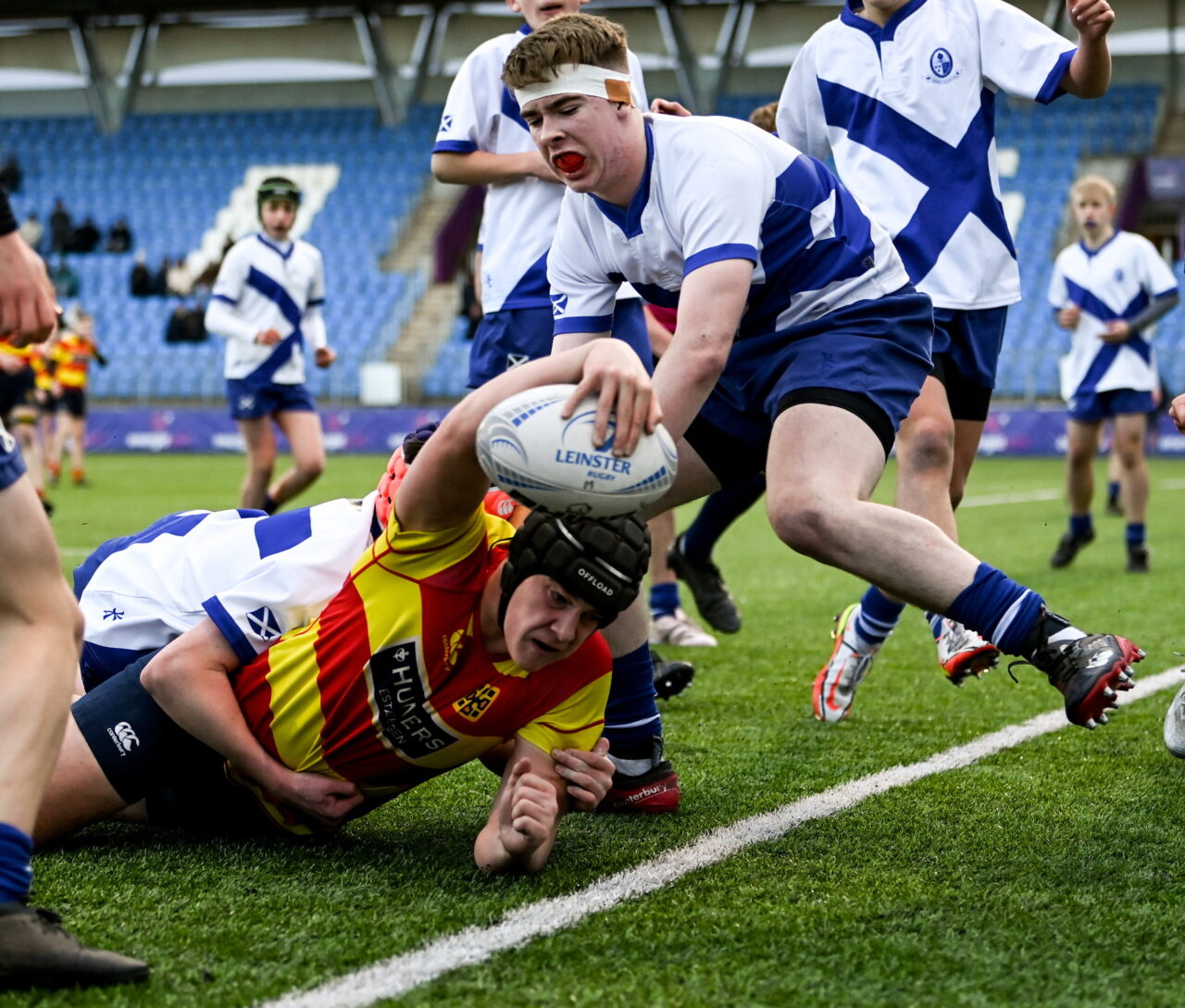 King’s Hospital got off to a solid start, Adam Abkary carrying to the line off the back of a scrum and Freddie Rust book-ended the half with an opportunist effort.

It was very much a case of staying close for the Sutton school in the first period, number eight Bolger’s try, converted by Ben Barnes leaving it 12-7 at the interval.

Once centre Sam O’Leary breached the KH defence for Barnes’ extras to slip them in front, St Fintan’s just had to play for territory.

The insurance score came when Bolger barged over for Barnes to post his third conversion in the 63rd minute.

Presentation College, Bray 25 CBC Monkstown 8
Pres Bray saved their best for the second-half in brushing aside CBC Monkstown in the first of two matches at Energia Park.

A try by openside Max Tully-Walsh and penalty by captain Liam Mooney for an 8-3 lead at the interval didn’t look nearly enough given the strength of the wind. 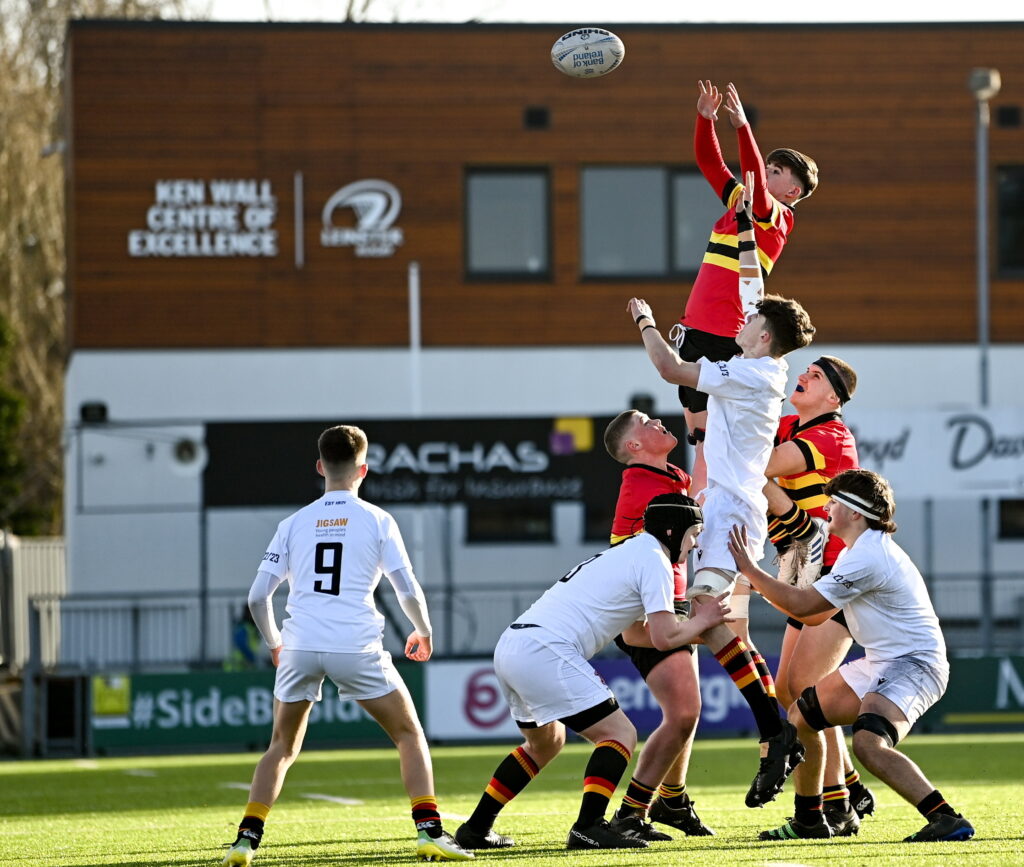 However, Pres knuckled down to business, thereafter, for prop Harry Graham, centre Mooney and lock Rory Wrafter to register tries that made the game safe.

It was perhaps apt that CBC captain Tom Reynolds should claim a try as reward for his exceptional work.

It was a case of start as you mean to continue, tries from hooker Oskar Riordan, flanker Matthew Smullen and number eight Ben Griffiths helping to build a 19-0 lead at the interval. 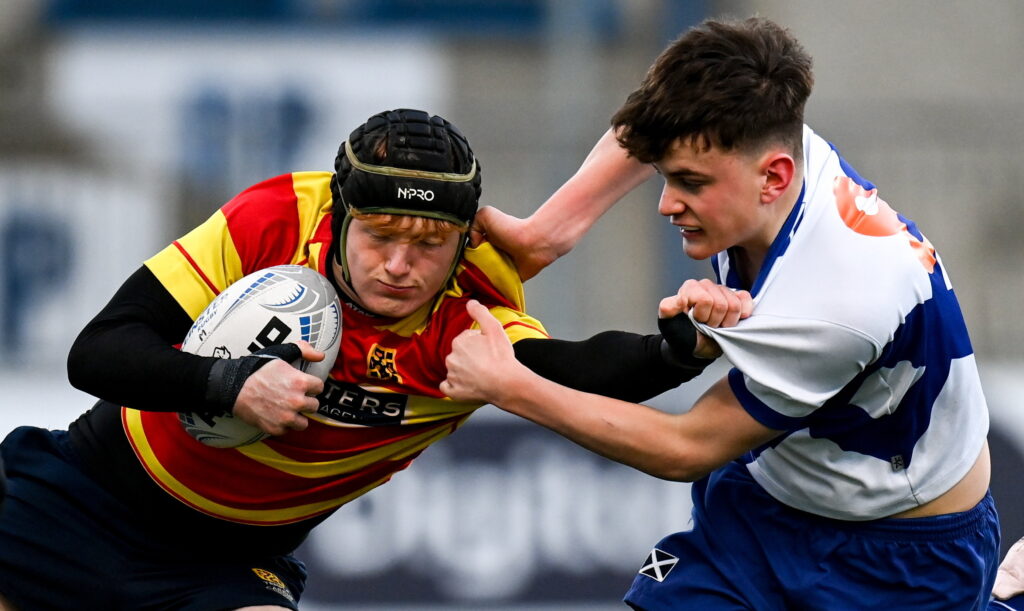 It was the next from full-back Lucas O’Gorman in the 37th minute that ended all hopes of a St Andrew’s comeback.

The Westmeath school could not make the elements work for them, despite a try by number eight Cian Ferlong.

It didn’t look good when they went in at 5-all for half-time and even worse when they trailed 19-10 into the fourth quarter.

Dundalk pierced the cover three times through Mike Daly, Eliot Usoh and Liam Reilly to take what looked like a definitive advantage.

However, hooker Mark Glynn managed to claim his second try in the 62nd minute and Wilson’s replacement centre Gyasi went over in the last minute to grab the victory.

The Kildare school were quicker to come to terms with the conditions, settling into their ambitious plan.

Skerries battled away gamely as evidenced by flanker Harvey Butler’s try, converted by scrum-half Leo Duff to stay close enough (21-7) at the interval.

Tullow Community School 15 Templeogue College 5
Daniel Haskins was the key to Tullow turning the screw against Templeogue in horrific weather at Naas RFC.

Number eight Brynn Nolan’s early try was a confidence builder before Templeogue’s James Slattery’s try made it 5-all at the break.

This was a contest in which territory was critical and, in that respect, Tullow had more of the ball in the right area.

With out-half Haskins controlling the ball, they were able to kick on from tries by replacement Sennan Keating and Aaron Dowling.

A crossfield wind was the dominant feature which Ardscoil out-half Daniel Henry used to his benefit as tries by centre Ronan Kelly (2) and full-back Senan Coffey drove them to a 19-0 lead at the break.

Undaunted, Counsel went about their business in a determined manner to cut the leeway to 24-19 as scrum-half Brian Minihan, centre Barry Furlong and flanker Sean Glapiak touched down.

The game was in the balance until lock Grufferty got on the end of the decisive play to seal the game.

St Patrick’s, Navan 46 The High School 0
Colm McDonnell, Bill Birmingham and Jack Shorten all picked up doubles as St Patrick’s Classical School powered into the next round at Ashbourne RFC.

A good start was more than half the battle as prop McDonnell crashed over in the fifth and tenth minutes for centre James Donnelly to convert both.

Number eight Shorten and second row Bermingham added to the pain, despite the HS’s lock Alex Clarke-Wallace, flanker Max Howard-McLean and prop Uriy Spain doing all they could to arrest the slide.

The sheer size and strength of St Patrick’s mattered as Cormac Nugent, Shorten, Birmingham all crossed before replacement Aaron Carey scored in his first-ever game of rugby.