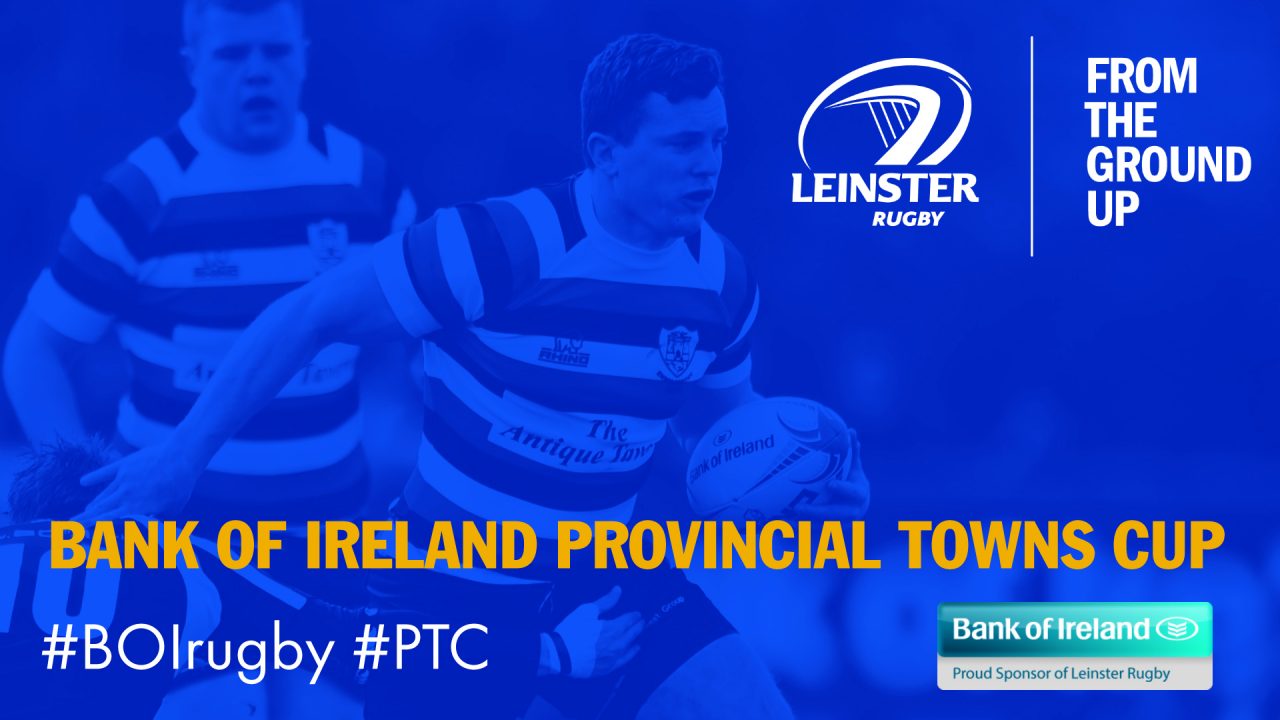 It’s that time of the year again. This Sunday sees the return of the Bank of Ireland Provincial Towns Cup to the calendar.

Now in its 91st year, the competition still holds a unique place in the hearts of all the participating clubs.  Cup competitions offer something different to clubs.

League form can often be put to one side as the magic and beauty of cup rugby continues to often defy logic.  Teams that are struggling for form in the league can use it as a springboard for the rest of the season or even give them a fresh outlet to throw off the shackles and get a run going.

For the league high flyers, there is a chance that it can offer up a distraction or give them another competition to express their worth in.  It is a competition for everyone and no one is without hope.

Last year’s final finished in dramatic fashion with Enniscorthy landing a penalty late on to deny Kilkenny and both finalists have been awarded a bye into the second round, the draw for which will take place in Roscrea RFC after the first round tie between Roscrea and Edenderry.

Gorey have been blazing a trail of late in Division 1A and sit in second place behind Enniscorthy. The Gorey men got one over on their Enniscorthy rivals last weekend with a 26-6 home win and they go into their game with Dundalk’s second XV full of confidence.  They go in as firm favourites against the Dundalk second string with their first team having gained promotion to the All Ireland league last season.

Another side facing second string opposition is Ashbourne.  A local derby, this one will surely have a bit of spice to it.  Ashbourne sit fourth in Division 1A, compounded with a win over Monkstown last weekend but they will have to be wary of a Boyne side who ply their trade in Metro Division 3.  Boyne is another club with their first team in the AIL who won the competition with successive wins over Tullamore back in 2009 and 2010.

Clondalkin make up the three Division 1A teams in Round 1 action (Enniscorthy and Kilkenny have byes) and the West Dublin outfit can take heart from their impressive cup run last season before they were eventually put to the sword by Kilkenny in the semi-final.  They fell narrowly to the Kilkenny men in the league last weekend and they face a tricky away test to Newbridge who themselves are sitting mid table in Division 2A.  The Newbridge men were in fine form last weekend when they ran in 62 points on route to beating Portarlington and with home advantage behind them, they will fancy their chances of ruffling a few feathers.

There will be an all Division 1B clash in Longford on Sunday as the hosts entertain Wicklow.  Longford, who contested the 2013 final have been struggling for form in the league, sitting second bottom and they are a prime example of a club who will revel in the chance of a cup run.  Wicklow sit 24 points ahead of them in third place but with Longford at home, Niall Moran’s charges will look to turn their season around.  Both teams were away from home in the league last weekend with Wicklow winning 17-0 at Coolmine while Longford picked up their ninth loss in the league at Tullow by double scores, 34-17.

A Midlands derby will be the battleground in Roscrea as the hosts entertain Edenderry who claimed Division 2B league glory last season.  Roscrea have had an excellent first half of the league and sit eight points in front in Division 2B.  Edenderry have been battling well in 2A and although they sit second bottom in seventh place, they are only two points behind fifth place Newbridge in a tight and competitive Division.  Edenderry have had some bragging rights over Roscrea already this season when they beat them in the final of the Midland League shield.

Another game that has the potential to go down to the wire is the meeting of Co Carlow and Cill Dara.  Co Carlow has a rich history in the competition, sitting top of the roll of honour and they secured a home draw against a Cill Dara side that is propping up Division 1B.  With only two wins from 12 league games, Cill Dara really need something to get the momentum back but a trip to Co Carlow, who sit third in Division 2A is hardly the draw they would have wanted to kick things off.

Tullamore’s second XV have reached the quarter finals for the past two years but they face a stiff test to even get by the first round this year.  They will travel to Division 2A leaders Portlaoise who despite being top, were beaten at the weekend by their closest rivals, Railway Union.  Tullamore second XV have been going well in Metro Division 3 and can call on a lot of players with first team experience.  Portlaoise have only been beaten twice in the league and with home advantage behind them, this is another tie that should be in the melting pot late on.

Wexford Wanderers will entertain Athy as the Division 2B rivals both look to make a statement.  With Athy in second place and Wanderers in fourth, there won’t a lot between them.  In fact, only five points separate them in the league and with the Wexford men having home advantage, this game is one of the more difficult ones to pick a winner in.  Wexford beat their rivals at home in the league back in November but the Athy men reversed that result only last weekend as the sides prepare for their second battle in the space of a week.

Portarlington, who sit in fourth place in Division 2A have drawn home comforts as they take on Naas second XV.  Port were humbled by Newbridge last weekend – 62-30 and they will see this as an ideal way to get back on track on their home patch.  Naas second XV play in Metro Division 2 and the standard in that division is high.  They lost out to Blackrock College last weekend on home soil meaning both sides will be determined to get back to winning ways as soon as possible.

The final game in round 1 sees Moate based outfit Midland Warriors play host to Navan second XV.  The Warriors sit second from bottom in Division 2B and they came undone at the hands of league leaders Roscrea last weekend on home soil.  They have struggled this season and although drawn at home, they will probably go into the game as the underdog.  Navan second XV play in Metro Division 3 and despite shipping a heavy away defeat to Old Belvedere at the weekend, they will be hopeful of getting the win on the road and advancing to round 2.

All first round games kick off at 2.30pm this Sunday and the full draw is as follows. Teams on the left are at home.