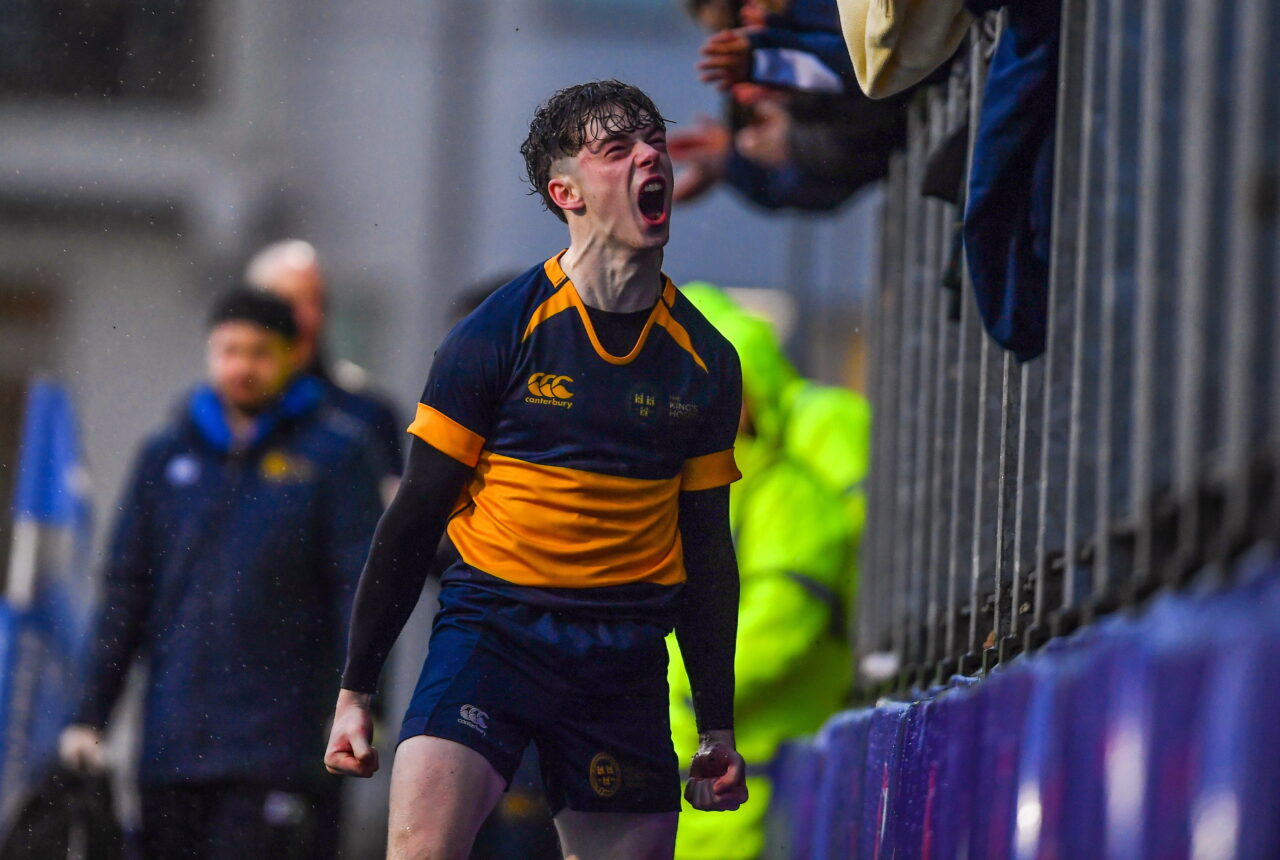 The Bank of Ireland Leinster Schools Vinnie Murray Senior Cup got underway this week with high-quality rugby on show in eight First Round matches.

CUS 41 THE HIGH SCHOOL 8
Holders Catholic University School will make a bold bid to retain the Cup on the evidence of their first hit out at Energia Park on Tuesday.

A fine line by Sean Byrne enabled CUS to take an early advantage before High School created two gilt-edged chances to hit back.

It looked like they were going to make a real game of it when Andrew Farrelly reduced the lead with a penalty.

Better again, centre Farrelly produced a dazzling piece of skill to wrongfoot three defenders on his way to moving HS 8-5 in front in the 12th minute.

It was as good as it got as CUS stitched together three lovely tries by scrum-half Charlie O’Byrne, centre Rian Treacy and flanker Ruben Maguire to lead 22-8 at the break.

The Leeson Street school maintained their momentum by adding tries from wing Senan Campbell, centre Byrne and flanker Hugh Quigley to ensure a comfortable passage into the quarter-final.

THE KING’S HOSPITAL 26 NEWPARK COMPREHENSIVE 19
The rain swept in for the second leg of a double-header at Energia Park on Tuesday, placing huge pressure on basic skills.

King’s Hospital gradually got the upper-hand, centre Edward Nuzum embarking on a personal mission from deep to score a superb individual try, converted by Luke Fogarty.

Out-half Fogarty seized on a loose ball to go from distance as well, knocking over the conversion for 14-0 in the 18th minute.

Then, right-wing Luca McNally picked up a loose ball to dive in for the third seven-pointer before Newpark was given life by prop Mateo Parker’s finish, converted by Cathal MacGearailt on half-time. 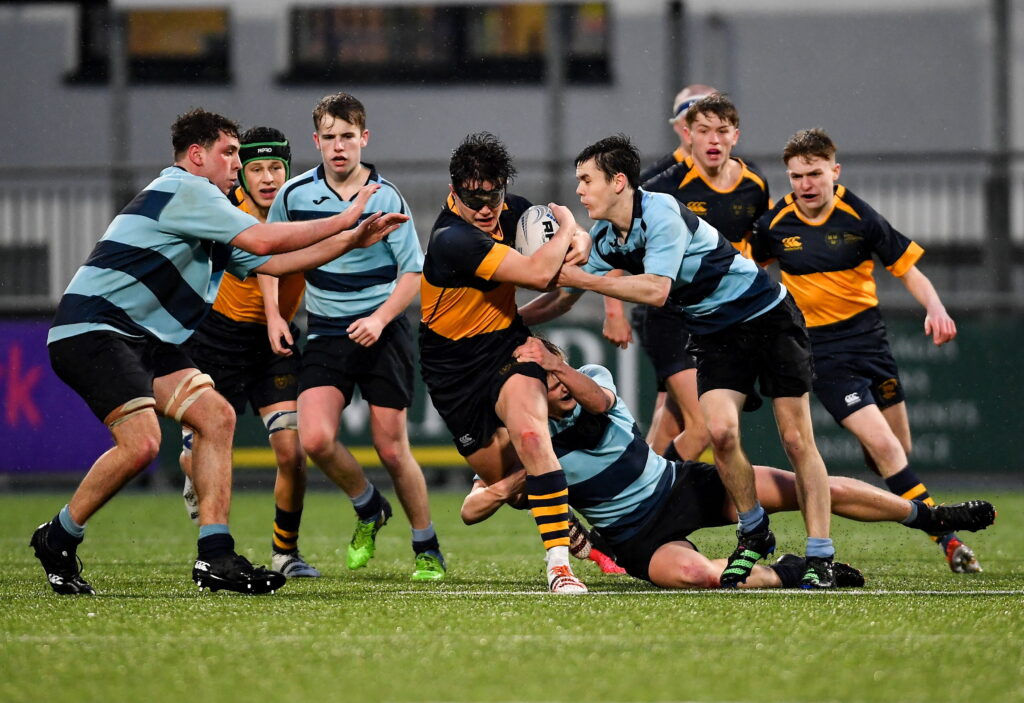 It was certainly game on as Newpark had the backing of the wind and a solid game plan, behind the carrying of Callum Howard, Scott Doran and Sami Phelan, to play territory against KH’s insistence on running out of trouble.

This led to a few perilous moments for the winners, surviving the danger to come upfield for centre Cian Behal-Valle to surge over in the 65th minute.

Newpark refused to go away, number eight Phelan cashing in from a tap penalty for MacGearailt to convert and full-back Andrew McAdams claiming a third in injury-time.

TEMPLE CARRIG GRAMMAR SCHOOL 45 ARDSCOIL NA TRIONOIDE 31
Temple Carrig were the winners of a 12-try shootout against Ardscoil na Trionoide in the opening leg of another double-header at Energia Park on Wednesday.

Both schools came to play on a cold day in which attack was favoured over defence as Ardscoil moved ahead from tries by full-back Oisin Grufferty and James Harris, who converted the latter.

In a see-saw affair, Temple really got going to hammer home three tries by lock Lukas Zdunek, left-wing Rhys Gamble and flanker Nathan Griffiths, all converted by Ollie Barr for 21-12 in the 26th minute.

The Athy boys had the wherewithal to reclaim the lead from two tries by Harris and Grufferty, holding a 26-21 advantage at the break. 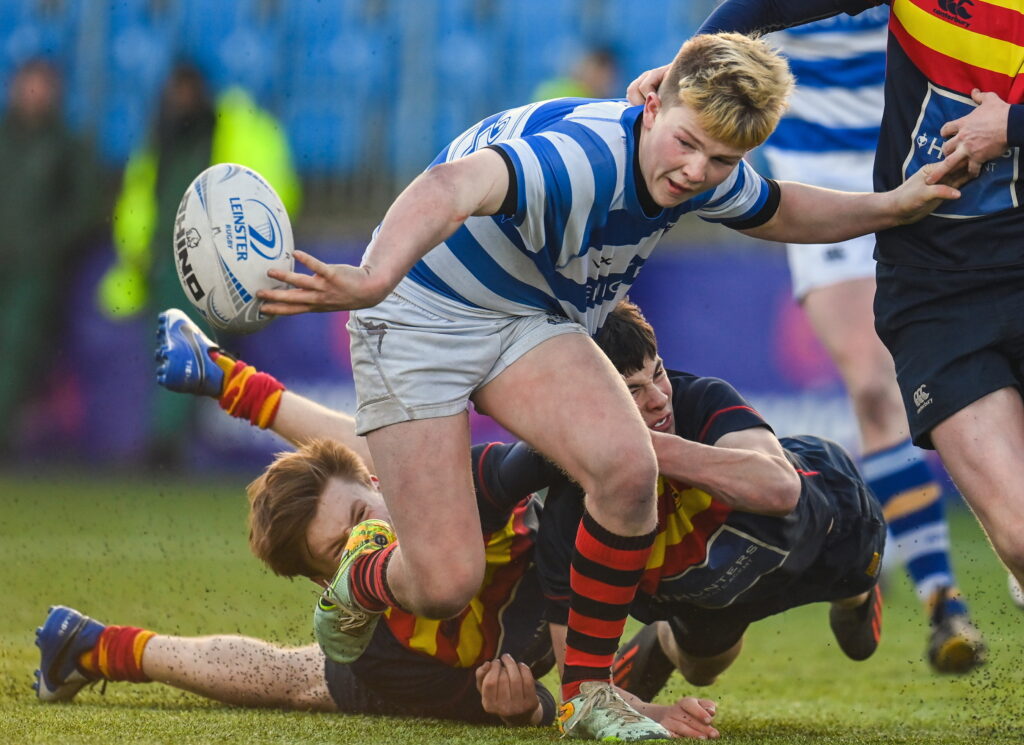 Temple Carrig turned to their forwards, led by Adam Williams and Zdunek, to keep it tighter for longer, playing the percentages before going wide.

This had the benefit of opening the door for centre Rhys Morgan to level it up before Ardscoil responded through elusive replacement Ross Harris.

From there, the Greystones school were able to exert enough control to take over, a penalty try for a high tackle on Gamble in the 55th minute followed by tries by full-back Jack Ward and impactful replacement Cathal Kirby.

ST ANDREW’S COLLEGE 22 ST GERARD’S SCHOOL 12
Jake Dolly was the hero of the hour with a brace of tries to see St Andrew’s into the quarter-finals at Energia Park.

The influence of captain Joe Ballance was critical to the game plan as left-wing Dolly’s try and Ballance’s penalty put the Booterstown school eight points up.

St Gerard’s were able to plot their way into the game, left-wing Sonny Kehoe’s try and Jordan Younger’s conversion reducing the difference to the minimum at the interval.

It was ace finisher Dolly on the mark again, converted by Ballance, before right-wing Harry MacChesney broke through for the third try, Ballance’s conversion taking St Andrew’s 15 points clear.

There was consolation for the Bray school in the form of captain Fionan Denver’s try near the end.

The Drogheda nursery was never headed, forging a 14-0 lead as loose forwards Hugh Sowray and Lincoln de Year led from the front.

They were never allowed to build on it as prop Jamie Manning, wing Senan Gough, full-back Rian Kindlon and number eight de Year joined Carley on the scoresheet.

MT kept on plugging away in spite of the adversity, replacement Theo Hellier securing a late try.

WILSON’S HOSPITAL 36 SKERRIES COMMUNITY COLLEGE 14
Ciaran McKenna was the jewel in the crown of Wilson’s Hospital’s comfortable win over Skerries at Clontarf RFC.

It took the Westmeath school time to make best use of the wind, taking control through three quick tries midway into the first-half.

Out-half Wheeler struck a penalty and converted the fourth try by the impressive Sam Mills before Skerries were given hope by James O’Connor’s try, converted by Sean Price, for 29-7 at the interval.

The North Dublin school applied pressure, driven on by flanker Darragh McEneaney, without making it count in the third-quarter