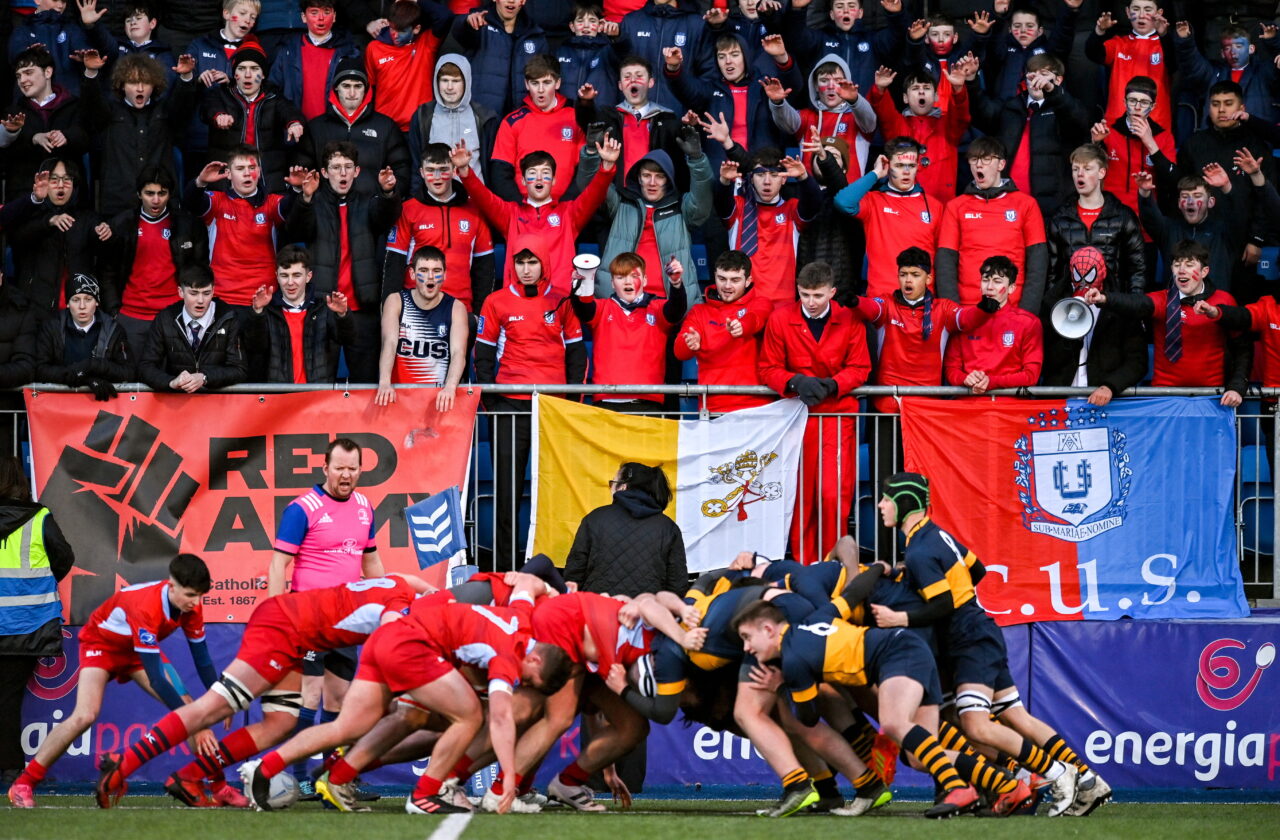 There were no surprises in the Bank of Ireland Leinster Schools Vinnie Murray Senior Cup Quarter-Finals, played out over two double-headers at Energia Park on Tuesday and Wednesday.

CUS 53 The King’s Hospital 0
Holders Catholic University School will boldly bid to go back-to-back in the Vinnie Murray on Tuesday’s evidence of the second quarter-final.

Captain Lucas Maguire shot from the back of a maul for the perfect start and, straight away, their defence turned away a series of drives at the line.

KH could not escape their 22 as CUS pummelled away, finally moving left for wing Sean Turner to double the lead to ten in the 17th minute.

They were methodical in probing the fringes for lock Dualta Larkin to claim the third try and number eight Dylan McNeice the fourth, both converted by Niall Cox, for 24-0 at the interval. 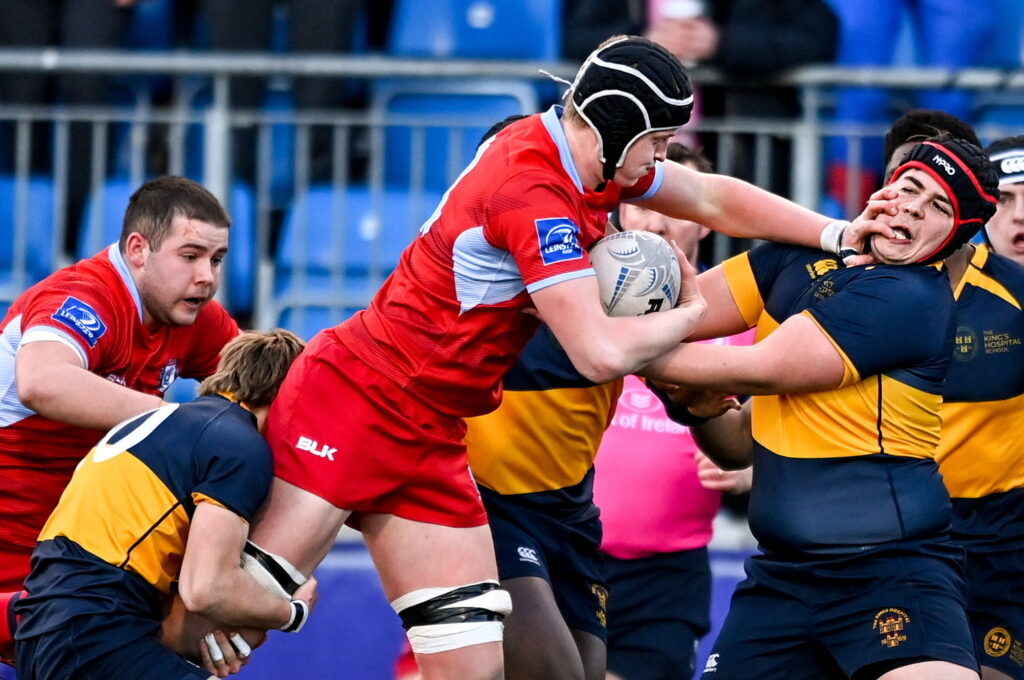 Even KH out-half Luke Fogarty’s flashes of brilliance were not enough to prevent Rian Treacy from grabbing an interception to stretch the lead.

Replacement Oran Redmond had the power to make the right corner, while Treacy’s pace and strong-arm fend were the centre’s avenue to the left corner in the 61st minute.

The breakaway speed of Treacy was good enough for a hat-trick and Turner picked up his second as KH tired towards the end.

The Booterstown school moved quickly into rhythm in a sweet move, initiated by Adam Tobin, concluding with MacChesney’s knife-through-butter finish, converted by Joe Ballance in the second minute.

From there, St Columba’s fared well enough as Tomas Casado, Benedict Huessen and Caleb Owen carried hard into the teeth of a sharp defence.

All the while, they were not able to threaten points, St Andrew’s Kiran Byrne piercing the first line of defence to create the second try for Francis Manzocchi, Ballance’s conversion doubling in the 19th minute.

Then, there were two quickfire strikes by Charlie Byrne and MacChesney to stretch the advantage to 26 points at the interval.

St Columba’s enjoyed their best period of play in the third quarter, peppering the line with runners without making the breakthrough.

As is so often the case, St Andrew’s bounded upfield for Kiran Byrne to finish out wide, added on a penalty try and another from replacement Adam O’Toole.

St Fintan’s High School 63 St Mary’s, Drogheda 0
St Fintan’s got the first of the quarter-finals underway with a dominant display on Tuesday.

The Sutton school was able to dominate territory partly due to their game management and partly due to St Mary’s insistence on taking risks from deep.

The back three of Finn McDonald, Joshua Hansen and Conor Toomey all breached the cover in a reflection of St Fintan’s eagerness to spread the ball.

St Mary’s matched that ambition to play, just not the execution, inviting more pressure for hooker Conor McGloughlin to beat two defenders for the fourth try. 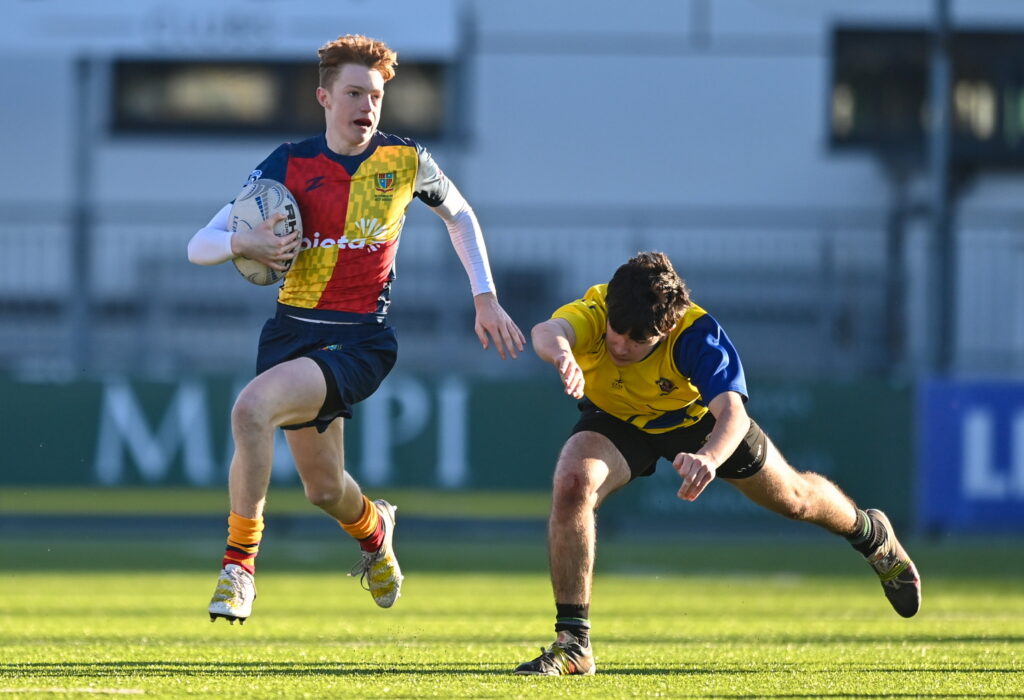 Scrum-half Oscar McCormack landed his second conversion to go beside an earlier penalty for 27-0 at the break.

The outlook didn’t get any brighter for St Mary’s when Hansen scooted over for his second, converted by McCormack.

The Drogheda school’s captain Luke Carley and centre Charlie Toolan kept looking for the ball, only to be met with a brick wall defence.

It was nip and tick for most of the first-half, Temple moving ahead from an early penalty by Jack Ward.

Then, Wilson’s began to find their feet, centre Mulligan causing havoc and hooker Matthew Bruton almost getting through a thicket of defenders..

The grinding work of the TC forwards paid dividends when flanker Nathan Griffiths grounded from close range for 8-0 at the break.

It looked even better the next time Temple came calling for left wing Rhys Gamble to cross and for Ward to convert.

Undeterred, Wilson’s came storming back through a bullocking burst from Mulligan, Ciaran McKenna picking and placing for the try, converted by Tom Wheeler in the 41st minute.

But, the long arms of centre Matthew Stewart were good for a block and gather to accelerate to the posts for Ward to convert.

The energy of Sam Mills was infectious and Mulligan rumbled over from the side of a ruck to close the gap.

Another burst from Mills created a sliver of a gap which Mulligan took on his way to a tremendous individual try, converted by Wheeler.