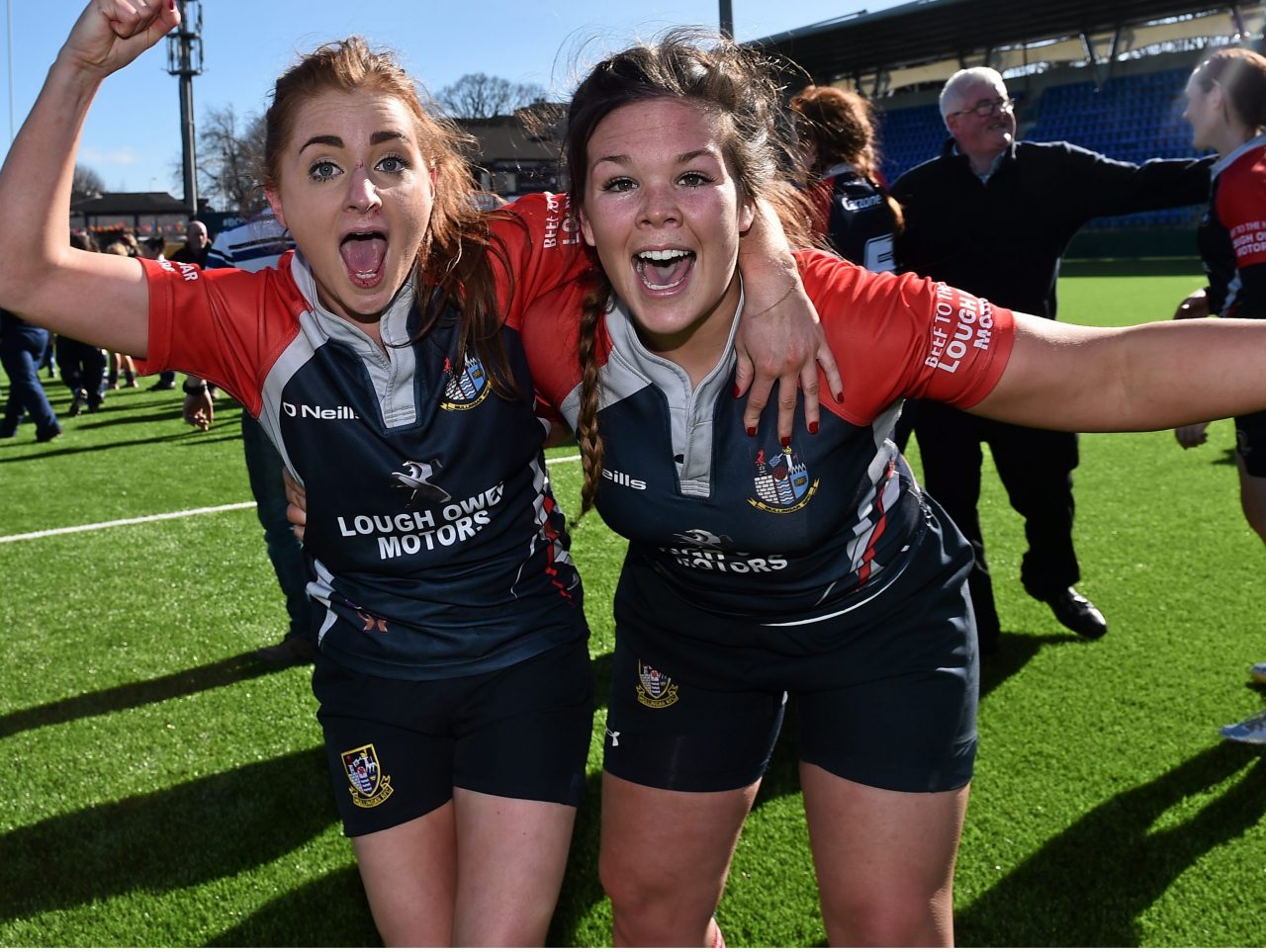 A second-half scoring blitz proved vital for Mullingar RFC on Saturday, when they finished a memorable day of Women’s Rugby at Donnybrook with a 20 point victory (23-3) over Midlands rivals Edenderry in the Bank Of Ireland Leinster Women’s Division 1 Final.

Despite what the final scoreline might suggest, it wasn’t always plain sailing for Mullingar, and thanks to impressive approach work from captain Oonagh Mulligan, flanker Mary Grogan’s 20th minute penalty offered Edenderry a suitable platform.

In fact, Mullingar were on the back-foot for much of the opening period, and Edenderry were the more dangerous of the two teams from an attacking perspective. The Westmeath side held firm, though, and after a quick move from the scrum on the left-flank deep into first-half injury-time, winger Martina Burke drove over from an Ellen Taite pass.

Taite’s bonus kick was off-target, but owing to her close-range penalty eight minutes after the restart, Mullingar had stretched their lead to 8-3. This was throwing down the gauntlet to Edenderry, and when Louise Kelly was on hand to finish off a fine move involving Niamh Kennedy and Jenny Gibson just shy of the hour mark, the Heifers looked set to claim the much-coveted crown.

Out-half Olive Butler’s try on 71 minutes left Edenderry with too much ground to make up, and Mullingar made certain of their triumph with a second try from Kelly, the game’s outstanding performer. 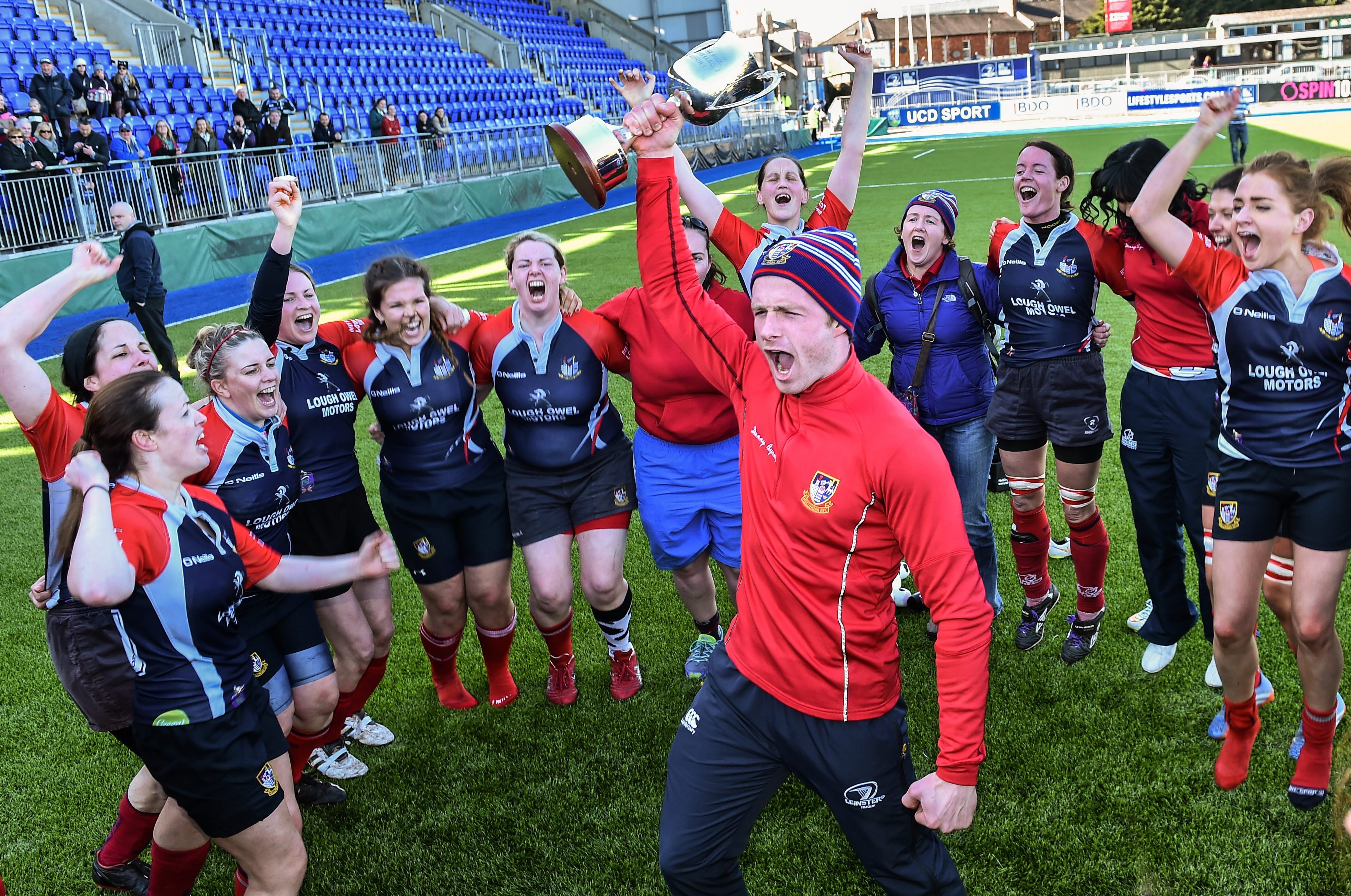 The day’s action was kick-started by the Division 4 Final, which was contested by Balbriggan and Greystones at the Bective Rangers end of the ground. This proved to be a tight contest throughout, as both sides defended with exceptional discipline.

‘Stones looked set to break the deadlock 12 minutes in when they spread the play across the Balbriggan line, but just shy of the whitewash, Lindsay Evans knocked on a pass from centre partner Jessica Keating.

The Wicklow side continued to pose problems for Balbriggan, but after withstanding relentless pressure from Shane Curtis’ charges, the north Dubliners ultimately opened the scoring courtesy of a successful Dearbhla Sheridan penalty 26 minutes in.

They held on to this slender cushion until the interval, and when the action resumed, they were threatening to enhance their superiority. ‘Stones persisted with their challenge, though, and on the stroke of 70 minutes, a Donna McFaul three-pointer levelled matters.

However, a push-over try from player of the match Siobhan O’Connor subsequently restored Balbriggan’s lead, and despite facing an incredible 14 minutes of stoppage-time, they eventually finished with five points to spare (8-3) in the fourth-tier finale. 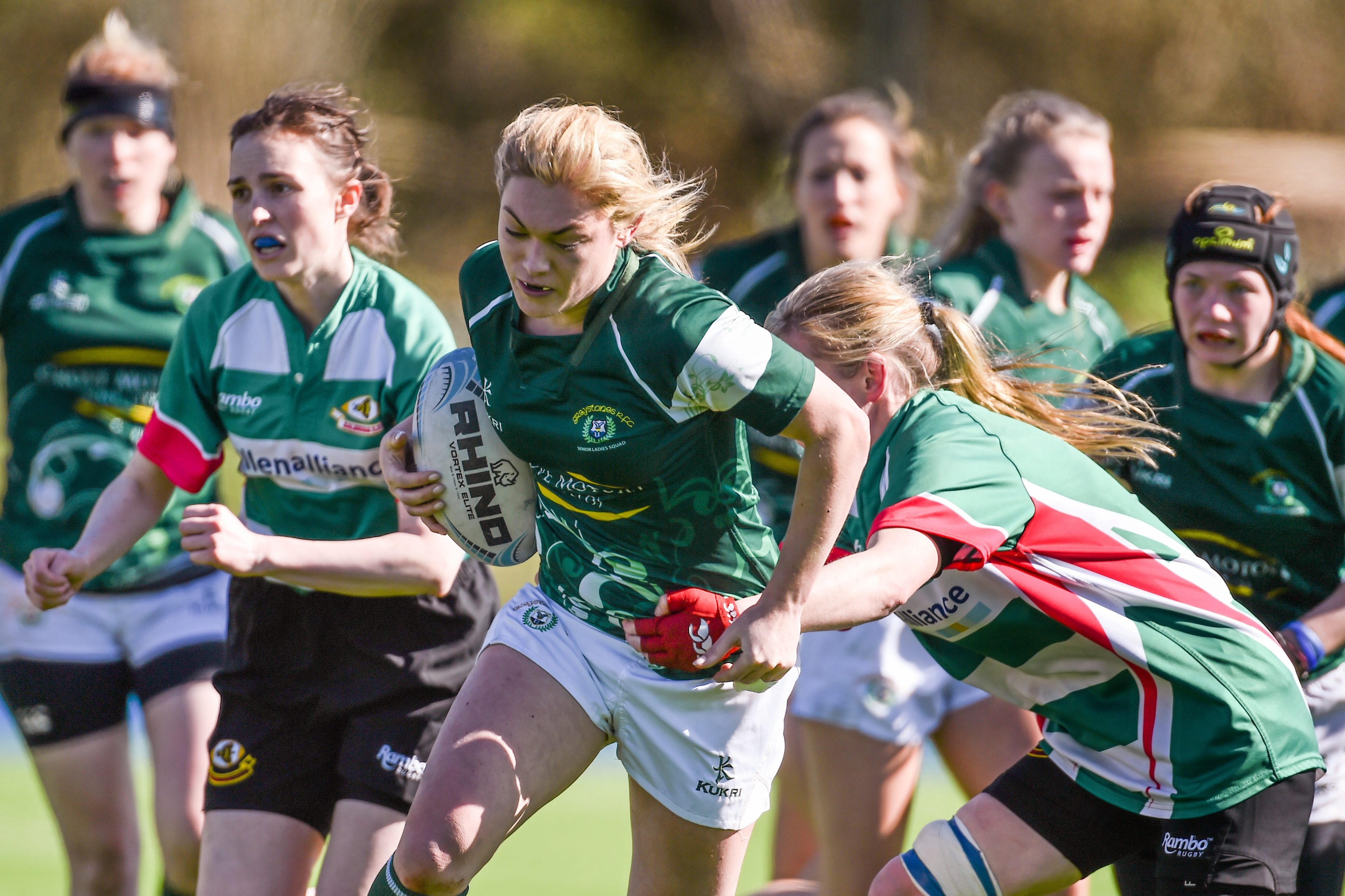 There was also little to separate Garda Ladies and Suttonians in the Division 3 decider, although a brilliant individual try from replacement Carrie Creagh ensured that the Westmanstown girls edged an intense Dublin derby.

Suttonians were on the back-foot for large spells of the opening period, but with fly-half Amy Cotter leading by example, their rearguard was holding firm with considerable efficiency. Yet, Garda finally discovered a path towards the posts after 25 minutes, and following a well-orchestrated move inside enemy territory, full-back Kaylee Colgan applied the finishing touches.

The conversion that followed this five-pointer was wide of the mark, but when the half-time whistle was sounded, Garda held a 5-0 buffer. This lead remained intact heading into the final-quarter of play, before a converted try helped Suttonians to move into the ascendancy.

This looked like being the crucial moment in the contest, but Creagh and Garda had other ideas. She embarked on a memorable cross-field dash into the Suttonians half of the field, and her excellent unconverted score meant that Garda Ladies emerged victorious on a scoreline of 10-7. 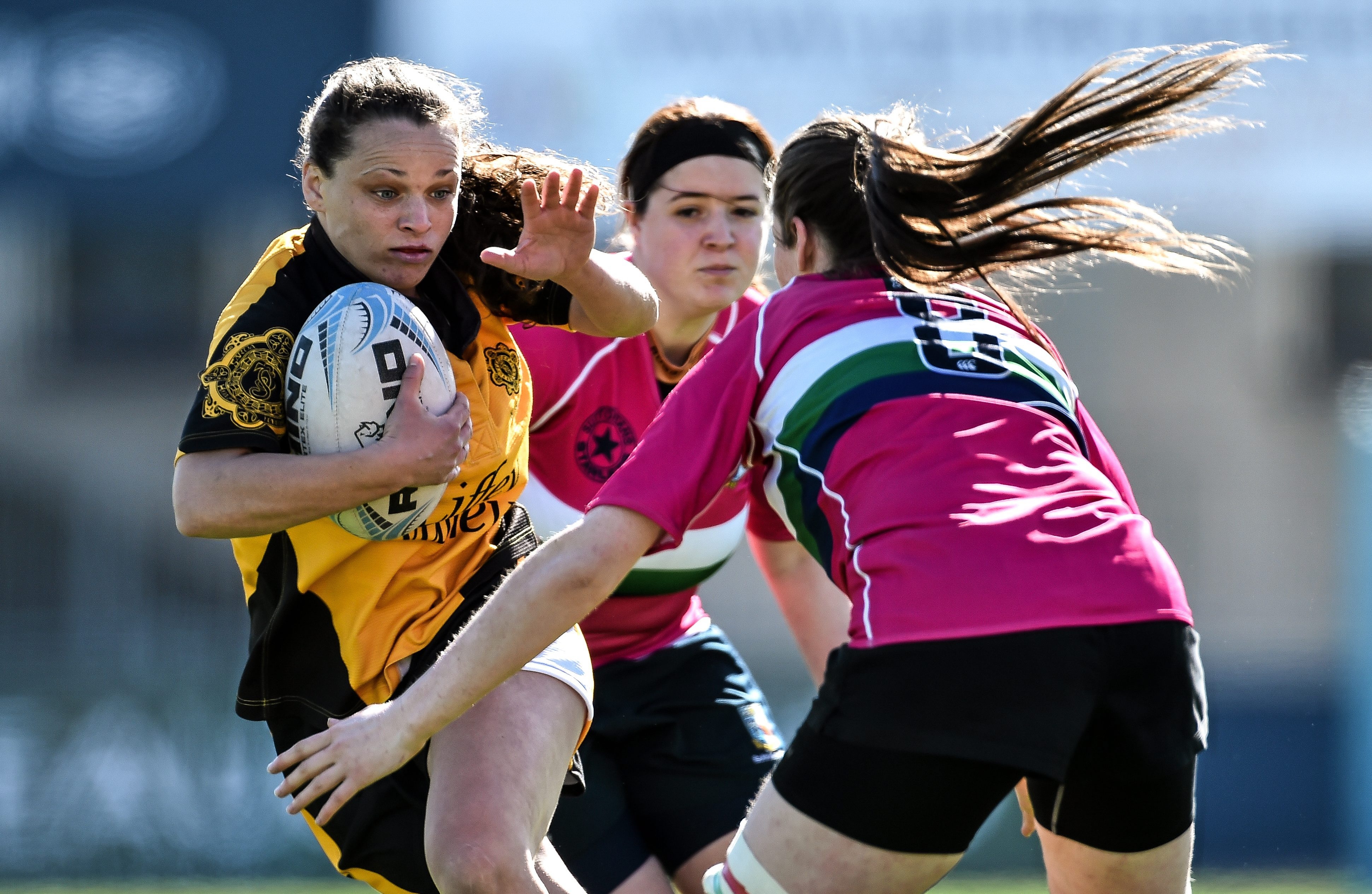 Just before Edenderry’s top-tier encounter got underway, their county rivals Tullamore played local side Railway Union in the Division 2 showpiece. It was a difficult afternoon for the Spollanstown brigade, however, as their rampant Park Avenue counterparts registered an astonishing total of eight tries in a 53-12 success.

An early Jude Cleary place-kick helped Union to settle into their stride, and when Kate Hegarty broke over the Tullamore line from an incisive attack, Cleary’s maiden conversion moved the southsiders into a ten-point advantage.

Another converted try by Meg Kendal showcased the pace and power of Railway Union, and thanks to a third touch down from Sinead O’Donnell after the resumption, it was quickly turning into a damage limitation exercise for Tullamore.

Union’s approach to the game was relentless, and they were showing no signs of complacency as the half wore on. Niamh Byrne, Ali Bird and Danielle O’Sullivan all added their names to the scoresheet with perfectly-executed tries, and when Bird secured her second try of the proceedings, the gap had increased to 48 points.

Tullamore provided a more favourable reflection to the outcome with a brace of late tries, but a final five-pointer from Ann Marie Moloney completed a remarkable performance by Railway Union. 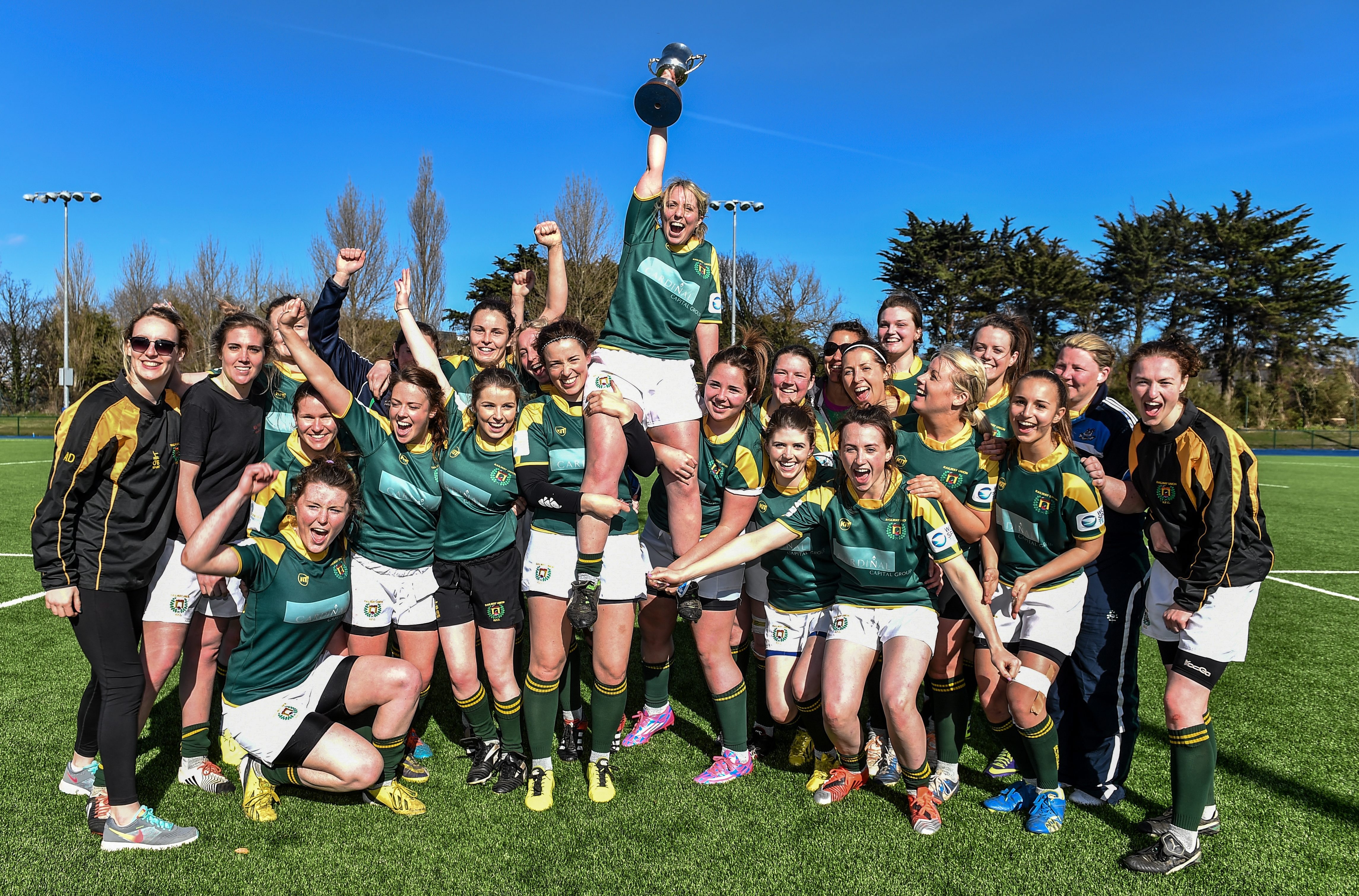