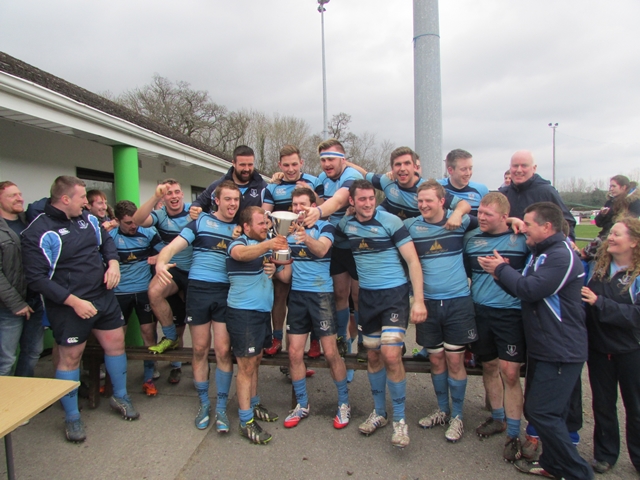 Despite finishing second in the regular season NUIM Barnhall were confident in their ability to win the final having beaten Naas two months previously in Parsonstown. With each side claiming one win a piece over the opposition during the regular season the final seemed destined to be a bruising battle fought between the two Kildare teams.

From the first whistle of the game both teams’ intent was shown with bruising physicality and formidable forward play. The forward packs seemed determined to gain a physical dominance over the opposition in a tight, gruelling opening quarter that saw both teams gain territory in the opposition 22 for significant periods of time.
NUIM Barnhall were the first team to draw blood when, after 20 minutes a powerful forward drive saw the visitors from Parsonstown score their first try of the game with openside flanker, Conor Feeney, guiding the ball over the try line from the back of a well constructed maul.

Immediately from the restart Naas kicked deeper, a forced a Blue Bull lineout well within their 22. The lineout (a reason for worry in recent games) functioned perfectly (as it did all day) and saw Eoin McCreery take the ball cleanly for out-half Rob Mullen to clear into touch.

Some ferocious defending and clever territorial kicking from the NUIM Barnhall backs led to Blue Bull possession in the Naas half and after several phases full of attacking intent the visitors were awarded a penalty in front of the posts which Mullen converted to give the Blue bulls a 8-lead.

From the restart the ball was fielded by powerful back rower, Shane Brennan. The ball was quickly fed out to number 8, Paul Nalty who broke the Naas defensive line (and hearts) before beating the full back on the outside to touch down in the corner following a 60 metre sprint.

The next ten minutes was full of enterprising play from both teams before the whistle went for half time.
At the beginning of the second half, and with the slope of the pitch and the wind at their backs, Naas pinned Blue Bulls into their own 22 with some cleverly executed kicks. The NUIM Barnhall lineout again performed well and the ball was cleared to the half way line.

The game began to get a bit disjointed with both teams being penalised for infringements at the breakdown and it was NUIM Barnhall who got the next score through some wonderful, exciting play by the backline, with Seamus Conway, Dan Ryan Ben McCarthy and Luke Kelly all making prominent contributions. The ball was fed across the backline after a solid NUIM Barnhall scrum and Dan Ryan popped the ball out of the tackle for Mark Kenny to dot down underneath the posts.

With 20 minutes to go NUIM Barnhall were 20 points up and Naas hadn’t scored a single point. The hosts began to pile pressure on the Blue Bulls and the tactical kicking kept NUIM Barnhall under pressure in their own territory. After 10 minutes of ferocious defending which saw loose head prop, Peter Courtney and second row Adam Wheatley make some shuddering hits the Naas scrum half threw a skip pass to their winger who outflanked the NUIM Barnhall defence to score in the corner.

With ten minutes to go and 15 points up, NUIM Barnhall’s tight head prop, Ben Harrison, had to be substituted with a back injury, being replaced by Adam Bourke. Naas continued their pressure in the NUIM Barnhall 22 but committed defence saw the blue defensive line hold solid until the final whistle.

Head coach David Kirk and Captain Eion O’Sullivan went up to receive the cup and thanked Naas for a hard fought game of rugby.

The two sides are likely to face off again in the final of the Leinster Shield later in the season.