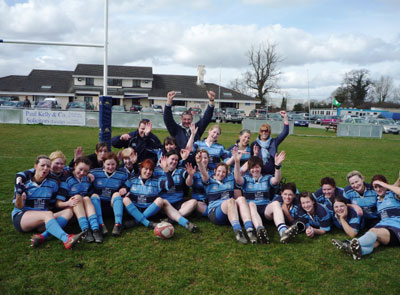 With pre-season training set to start in a little over two weeks time the Barnhall Babes as they are known, have set themselves the task of recruiting and training as many new players as possible before the start of the new league season in September.

This year they will be hoping for further success when they enter the All Ireland League for the first time. Between September and Christmas the Babes will play nine league matches and are aiming to use this time to bring in as many new players as possible. Starting in a little over two weeks time the Babes pre-season training will aim to teach players all the basics in rugby. From how to catch a ball to scrummaging techniques, tackling and everything in between. The Babes will also be running ladies-only tag rugby on Thursday nights where they will be doing fitness training and playing non-contact tag rugby matches.

Thursday Night Tag is a fantastic way for people to get involved with NUIM Barnhall and head coach Kevin Sheil has been urging new players to joining tag even if “…they’ve never seen a rugby ball before. Most of our players started by playing in the ITRA tag rugby leagues here during the Summer but we are hoping to keep tag open to non-contact rugby players as well this year, to give them an opportunity to join a club and get involved”.

Of the team that started the final in Naas last year eight players got their start in rugby by playing tag-rugby. NUIM Barnhall have always been known for their exciting running style of play and it is hoped that introducing players to the running style of tag-rugby they will be able to learn the skills needed to play stylish  full-contact rugby in the NUIM Barnhall way.

“The club is fully behind the women’s team”, Anne Carroll the new women’s forward coach and last year’s captain said. “We have a girl’s mini-team who played at half time in the women’s international in Ashbourne and last year a girl’s under-18 team was set up to cater for teenagers interested in playing. Our aim is to have teams for girls of all age groups from mini rugby through youth rugby in the club to college rugby in NUI Maynooth and then women’s rugby back in Barnhall.”

If you are interested in playing rugby or tag rugby contact women’s head coach Kevin Sheil on 085-7344082 or Team Manager Caroline Smith on carolinesmith12@gmail.com