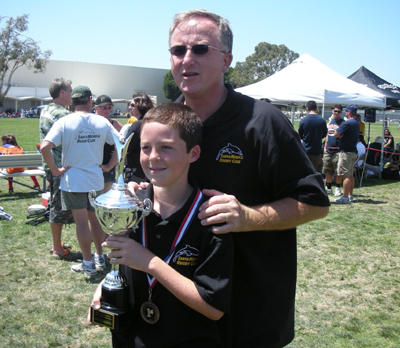 During the summer they helped coach Santa Monica Rugby Club Boys Under-14 and Boys Under-12 teams, respectively, to victory in the Southern California Championship.

This is the first time that the prestigious Santa Monica Rugby Club, a.k.a “The Dolphins” (winner of two U.S. National Club Championships) has ever won the Southern California Championship in two different age groups during one season. More importantly, their two sons Conor Lydon (14) John Conor Shalloe (11) played a significant role in winning the Championship for their respective teams.

These photos show the proud Dads with their sons and the trophies and we hope that these young Dolphins will someday wear the Bective jersey!