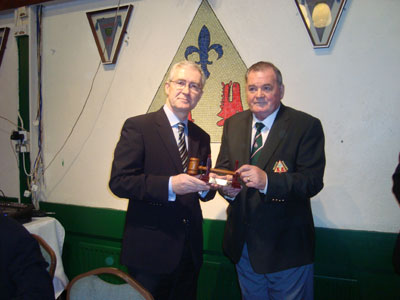 In February 1910 (101 years ago this month), on the proposal of Bective and seconded by Monkstown, UCD RFC became affiliated to the Leinster Branch IRFU…

Over the years there have been many players who, when finishing their studies in UCD, transferred to Bective. Players like ‘The Body’, Tom Feighery, P.J. and Frankie Smyth, Malachy Coughlan, Tom Kavanagh, Harry Harbison, Ian Finnegan and Al Moroney are a few of the names that played with distinction for both clubs.

This connection between the Clubs continues, in the person of Bective Vice-President Michael McGrail.

When the two Clubs met last Saturday in the AIL there was a most enjoyable pre-match lunch, after which Joe Nolan, the President of Bective Rangers FC, made a special presentation to Dr. Hugh Brady, President of UCD RFC (and President of UCD) to mark the Centenary Year of the Club.