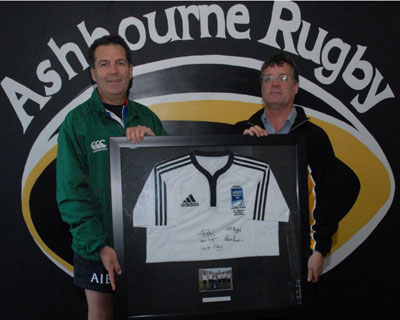 Kevin Beggs came to Ireland in 1995 from his native New Zealand, originally he settled in Wicklow but in 2002 he moved to Ratoath in Co Meath and shortly afterwards joined Ashbourne Rugby Club…

It was while in Christchurch New Zealand his rugby career started where he played for the Marist Club, and when Kevin arrived in Ireland he thought about continuing his rugby career, but decided against it and instead opted to take up the whistle and become a referee.

Kevin credits the late Harry Ardill who encouraged him from the start of his refereeing career in 1999 by giving him his first rugby laws book. Later on Bernard Boland was instrumental in keeping Kevin interested in continuing when he failed to make the IRFU panel.

Kevin remembers his first trial match as a Leinster Rugby referee – it was the same day New Zealand lost to France in the 1999 World Cup semi-final. Now in his sixth season as an IRFU referee, he has refereed at all three levels of AIL as well as officiating as touch judge in Magners League, Amlin Challenge and Heineken Cup. He has also refereed in most of the Leinster finals over the years, including the schools Senior and Junior Cup finals, JCT, Mc Corry, Provincial Towns and Metropolitan Cup finals.

Over the years Kevin has enjoyed most, if not all of his games, but most notably were the Towns Cup final, his first Heineken Cup match, refereeing Seapoint against Monkstown in front of a very large crowd in the Leinster League, but his biggest thrill was in May this year while representing Ireland and Ashbourne at No. 5 at the Amlin Challenge Cup final in Marseille between Cardiff Blues and Toulon. The match was played in the Stade Velodrome Marseille in the south of France and Cardiff Blues defeated the French team on their home ground.

Each of the officials wore a specially commissioned jersey for the occasion. On Kevin’s return he duly had his very unique jersey framed for the purpose of presenting it to Ashbourne Rugby Club. Kevin presented his jersey to the Chairman of Ashbourne R.F.C. Rod Cosgrave (see photo) and it is now proudly displayed in our clubhouse.

Kevin has also been selected as No. 5 in the upcoming Ireland v Argentina match on Sunday, 28th November and says he feels honoured when he is selected to officiate whether as referee, touch judge or sideline official, and more especially when he is representing both Ireland and Ashbourne abroad. He is quick to point out the great work that the other club referees in Ashbourne RFC have been doing over the years including, Declan Mahon, Joe Elliot, and Pearse McGrath and our lady referee Helen Reilly.

Kevin is very proud and excited that his fellow country men the famous All Blacks are coming to train in his own Irish club Ashbourne RFC in preparation for their game here in November as part of the winter series. As well as representing Ashbourne on the Leinster Board of Referees he is also a valued member of the executive committee in the club.

He is deserving of his success and we at Ashbourne are all very proud of his achievements so far and have no doubt that there are many more big days for Kevin in the future officiating at the highest level both here in Ireland and abroad.