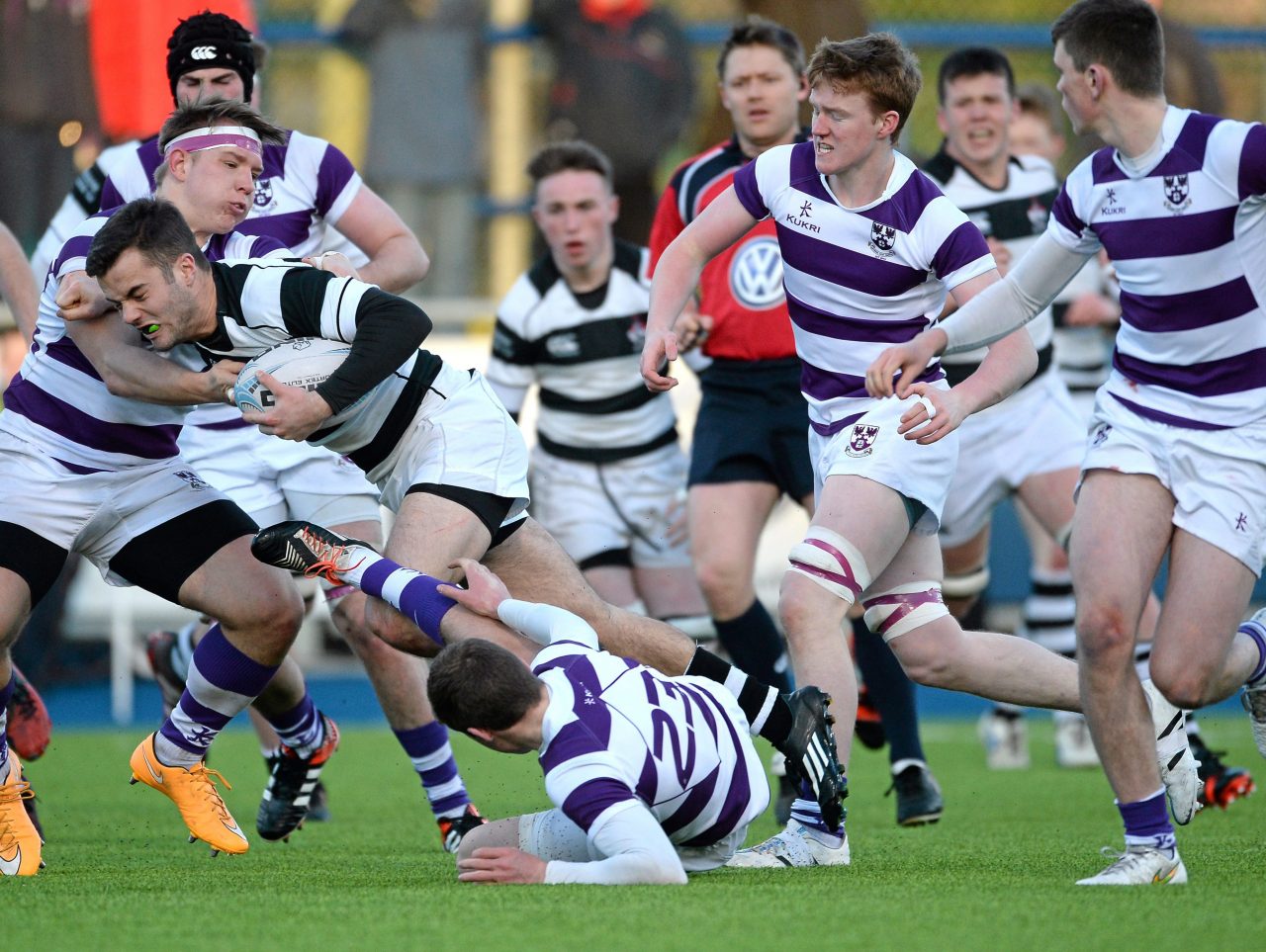 CLONGOWES WOOD COLLEGE 26 BELVEDERE COLLEGE 27 Phil Werahiko’s Belvedere made it through to the Bank of Ireland Leinster Senior Cup final, despite a heroic late comeback from Clongowes Wood at Donnybrook on Tuesday.

The Kildare school went in without their Ireland Schools centre Colm Mulcahy, James Lappin moving into the thirteen jersey with Fionann Madden on the right wing, while Belvedere’s Senan McNulty came in for Jesse Iredale at blindside.

Belvo’s first act was a replica of Ireland from Hugh O’Sullivan’s up-and-under to centre Declan Murnaghan’s hard hit on scrum-half Rowan Osborne. The great ball played a central role in the ball going back to Clongowes.

Lappin found a gap on the outside shoulder and Sean McCrohan was almost through only to be pinged for not releasing in the tackle made by Tom de Jongh.

The penalty gave Belvo’ position. The maul was impressive and Jennings’ cross-field kick could not be taken in by wing Sean Long under pressure from the well-placed Michael Silvester. Out-half Jennings came back to misfire a penalty.

Mistakes began to creep in. Belvedere came back to miscue a lineout. Full-back Eoin Cleere’s kick kept them inside the 22 where an overthrown lineout was almost taken to the line by flanker Max Kearney with Charlie Carroll making the stop.

The recycles came. Hooker Andrew Hynes and Jennings kept Clongowes honest before Oscair McGrath crashed over in the left corner. Jennings converted from the touchline in the tenth minute.

Then, Jennings took full advantage of a miscommunication on the end of Hugh O’Sullivan’s box kick, the ball allowed to bounce for Jennings to dribble the ball through and land on it for a second try in a minute.

It was quite a journey back for Clongowes. Flanker Donal Mongey started it by forcing a penalty on the floor. Wing Conor Murray went for the corner flag instead of the posts. The lineout was lost and O’Sullivan cleared to touch.

The Purple & Whites returned to their phase game. The problem was the conditions made their tempo difficult to maintain. In contrast, Belvedere were direct and did their work closer to the heart of their pack. De Jongh broke down the short side of a scrum. When it was moved, the handling was not sure enough.

They came back for a scrum. A collapse there allowed Jennings to stretch it out to 15-0 in the 21st minute.

The involvement of wing Madden in off his wing allowed fly-half Jonathan Glynn a shot at goal. It slipped right and wide.

Every time Clongowes made inroads, the defence stepped up and O’Sullivan kicked Belvo down the pitch.

De Jongh was strong in contact and a ‘no-arms’ tackle on McGrath earned a penalty which Jennings pulled to the left just before they went in with a 15-point lead at the break.

From the restart, Clongowes appeared to be more interested in territory and this paid off when the northsiders twice went to touch on the full for a concession of heavy metres.

Suddenly, the sun came out and the wind seemed to die just as De Jongh took off again.

Silvester’s classy counter was ruined by a side-entry into the ruck. Belvo’s slick move to the front of a lineout nearly worked, hooker Hynes foot going into touch as he careered into the 22.

They were still in command. Full-back Eoin Cleere fielded a clearance. They earned a scrum. Jennings made the initial thrust. De Jongh took it up. Lock Conor McCaffrey, prop Mike Sweeney and centre James McKeown combined to send Cleere into the left corner for 20-0 in the 44th minute.

The Clane school had to strike back immediately.

They found a lineout to their liking. It forced a scrum six metres out. Centre Michael McDermott, replacement Edward Carroll, captain Jonny Molony and Will Connors were all repelled.

The lineout maul was next on the menu. It switched into gear and Mongey was on the ball to ground out a try for 20-5 in the 50th minute.

They had to add quickly to sow a seed of doubt. They couldn’t. O’Sullivan broke from deep to force Madden into emergency action at the back as Belvo’ flanker Max Kearney closed in.

They had the consolation of a lineout maul and replacement Dan McCaffrey threw it accurately and got around to claim the try for Jennings to kick the extras in the 54th minute.

It looked all over. Clongowes had other ideas. Full-back Silvester stepped away from two tackles and Osborne surged through a gap to find the front foot. McCaffrey was binned and Osborne made it tell by slicing through for wing Murray to tally two more points.

Straight away, wing Madden burst into life, McDermott carried on and Silvester made defenders miss. The forwards took over to force a scrum. Lappin threatened and Molony delivered with a clever dive in for Murray to make it 27-19 from the conversion in the 62nd minute.

A favourable kick-off and turnover at a maul eased Belvo’s nerves. But, Lappin stepped in to intercept and travel fully 60 metres for Murray’s conversion to make it 27-26 in the 65th minute.

Belvedere went back to basics. They kept it tight until centre Murnaghan pumped his legs for precious metres. The penalty came. Jennings missed it.

It didn’t matter as the final whistle blew.