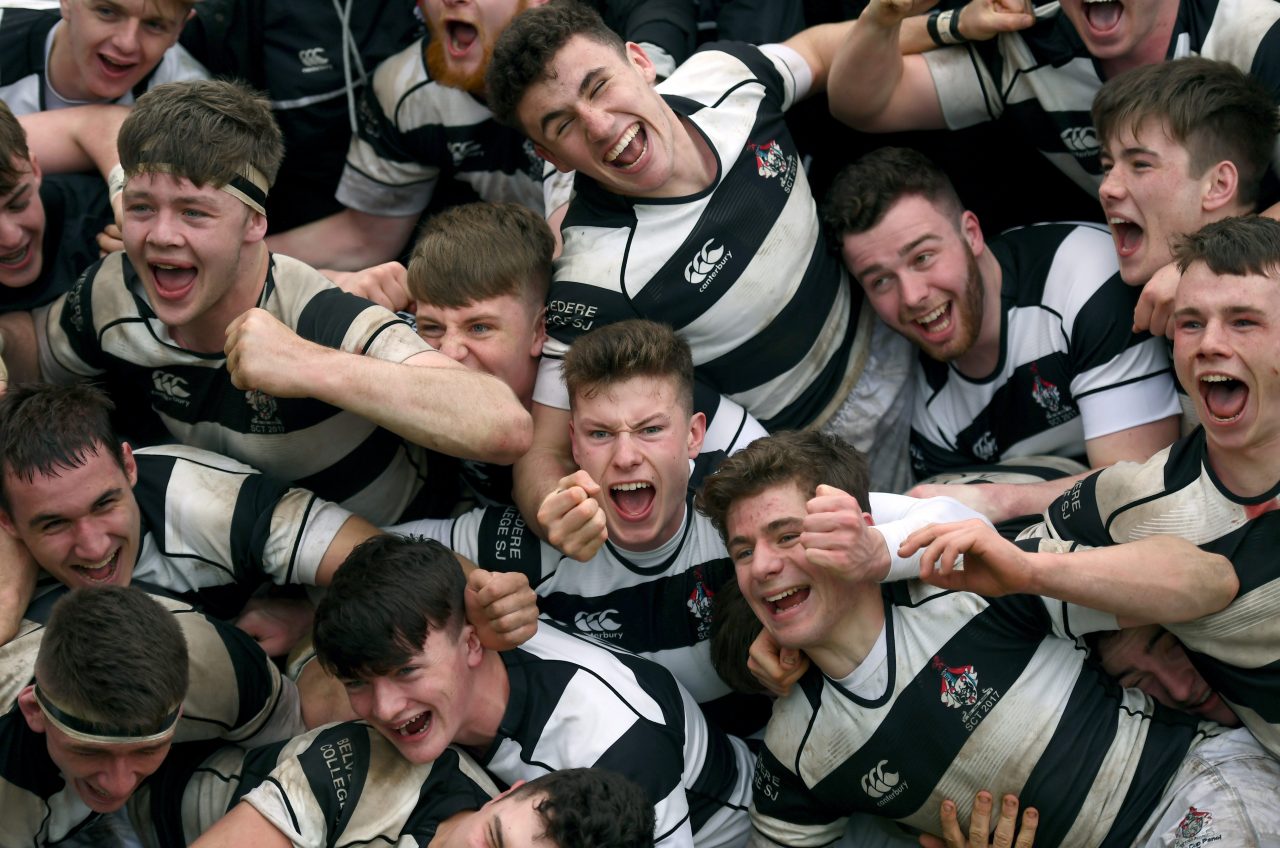 Perhaps the adrenaline rush played a part in Belvedere’s David Hawkshaw putting the kick-off into touch on the full.

The first real thrust came from their centre Peter Maher to put them in the right area.

From there, left wing Jordan Wilkes found a hole only to lose control of the ball as he went to ground.

Hawkshaw’s handling and football nous created space into which the out-half tumbled a kick.

On Blackrock’s first continuous possession, they kept the ball superbly to make inroads until Max Kearney’s presence over the ball caused a side entry.

The release of pressure was compounded by a penalty for bringing down a maul.

Just when Belvedere looked to activate their maul, the throw was wayward in difficult conditions.

The wind was playing havoc with the hookers’ darts and a second ball went out on the full, from Belvo’ nine Paraic Cagney this time.

Their kicking game was beginning to have an influence, never more so than when Hawkshaw grubbered the ball through.

Full-back Tom Roche could not tame the awkward bounce and Maher was on the spot to touchdown for Hugh O’Sullivan to make it 7-0 in their 23rd minute.

This was extended when Blackrock hooker Stephen McLoughlin was whistled in a borderline call at the ruck for O’Sullivan to stitch on three points in the 27th minute.

Blackrock needed air to breathe life into the challenge.

They got it from a mix-up in the backfield for a scrum.

Number eight Cian Reilly and Roche made ground until the ball was forced forward through gritty defence to leave the champions 10-0 ahead at the break.

It was a long way back from there given the difficulties underfoot.

They got what they wanted when centre Liam Turner forced a penalty out of Wilkes on the floor and out-half Peter O’Reilly slotted the points in the 38th minute.

Blackrock captain Reilly came hard around the corner to draw an infringement out of prop Jake Robinson.

It took Hawkshaw’s rip to take the ball away from John Fairley and centre Maher countered up the left before the ball was spilled.

It was turning into a heavy slog. That man Hawkshaw ripped the ball free of Roche.

Scrum-half Cagney’s devilish kick forced Roche into a mistake compounded into a penalty.

Hawkshaw drilled the ball to the corner. Their maul looked menacing. It was brought to ground and the close-in drive was foiled by resolute defence by ‘Rock.

The northsiders were masterful in recycling the ball to test the patience of the Rock boys, who eventually coughed up a penalty.

Centre Turner was almost onto a stray pass from Cagney. The ball was beginning to stick until the majestic Kearney ruined their momentum with a perfectly poached egg.

The lineout went on the wind to the alert Andrew Murphy, requiring O’Sullivan to tidy up at the back and relieve the pressure.

The carriers came thundering forward, Murphy, Coyne and Thomas Clarkson taking play right to the line where a fumble was forced.

The intensity was red-hot as Blackrock came powering forward where, incredibly, Hawkshaw ripped the ball away for the third time.

They couldn’t go on this way. There had to be territory to go with the tenacity.

Flanker Conor Doran gave them go-forward and Hawkshaw’s kick through squeezed a knock-on out of Turner just on ‘Rock’s 22-metre line.

The endeavour couldn’t be any greater. Unfortunately, the ball was not co-operating as full-back Roche completed a superb turnover.

He backed this up with a strong burst through the middle where flanker Doran drove into contact to cause a penalty turnover.

The clock was the enemy of Blackrock and it would take something magical to break down a special defence.

There was time for one last play.

Blackrock kept the ball with consummate professionalism, driving relentlessly to the line where Clarkson was heroically held up by Kearney to signal the end of the game.