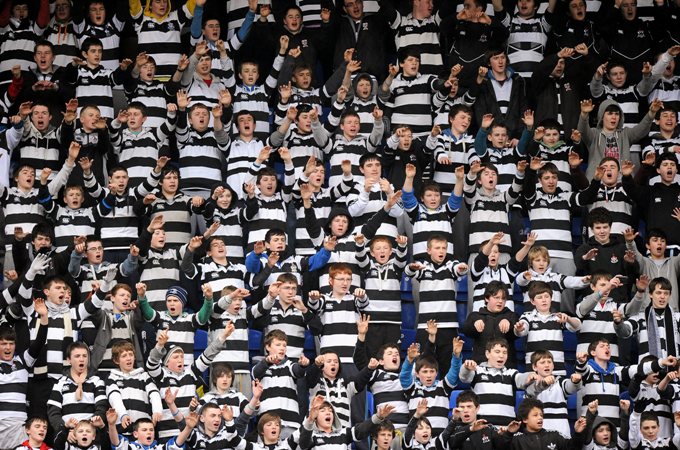 There was a high intensity start to this Junior Cup match between Gonzaga and Belvedere as both sides attempted to stamp their mark on game within the first few minutes. This resulted in an injury to the Belvedere captain, Max Kearney, inside the first 10 minutes, although his side did take a three point lead thanks to some good place kicking from Dylan Corrigan Forbes just inside the 10 metre line.

However, Gonzaga didn’t take long to retaliate. A brilliant kick from Micheál O’Kennedy brought play inside the Belvedere five-metre line. Gonzaga won the line-out and Jack McVeigh crashed over from the maul. O’Kennedy didn’t convert.

Belvedere came right back, with Sam Osbourne dodging tackles and getting over the line to score. Forbes added the extras, but Gonzaga refused to lie down. They gradually brought themselves deep inside the Belvedere half, and a moment of magic from Brian O’Donnell brought him past two players and under the posts. O’Kennedy converted and Gonzaga held on until half-time.

The second-half saw much of the same in terms of aggression and intensity, but, credit to both teams, the defences stood firm until the last ten minutes. Belvedere spread the ball wide for David Hawkshaw and he scored in the corner despite the desperate attempts of the Gonzaga defence. Gonzaga hearts were broken as Belvedere rejoiced.

Take a look at the full list of results and fixtures in the Beauchamps Junior Cup.