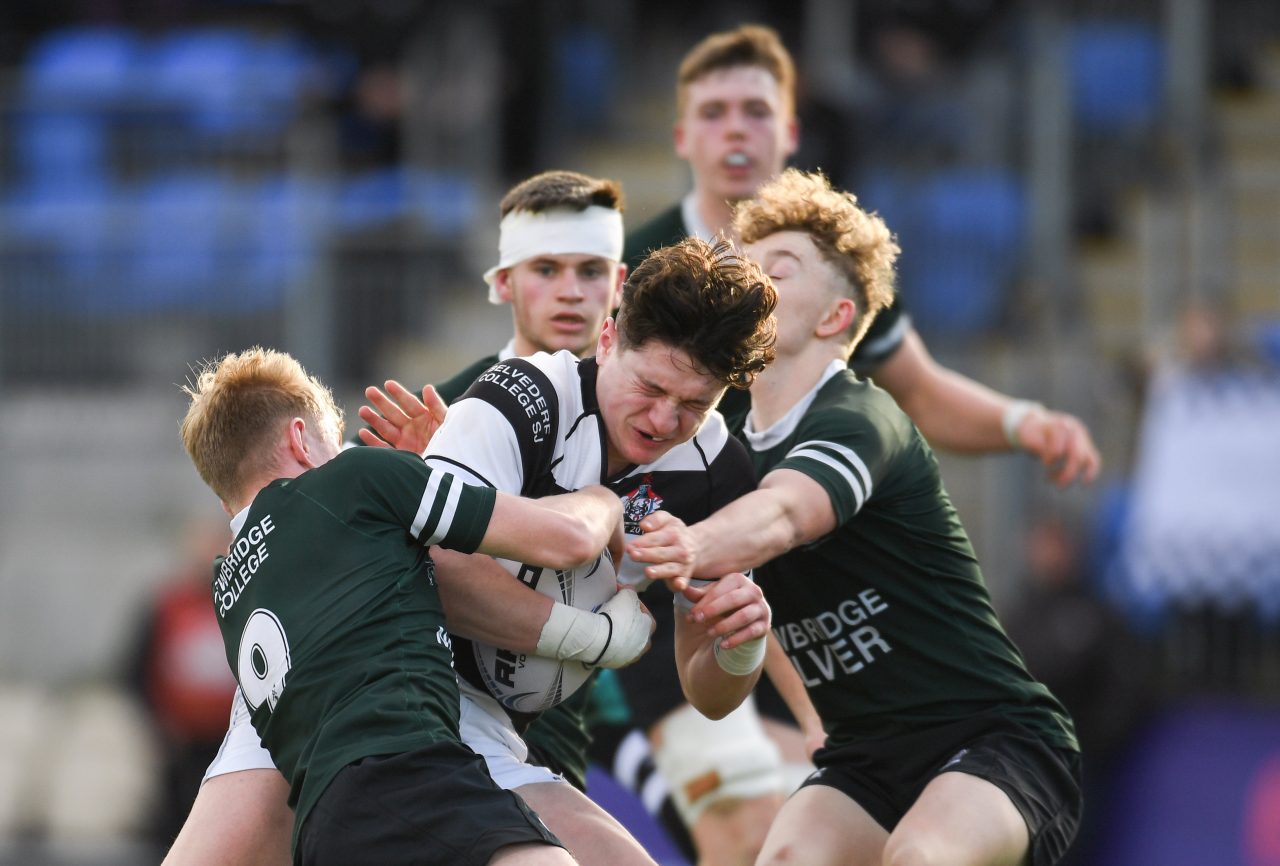 Belvedere College were too strong, too ruthless for Newbridge College in the Bank of Ireland Leinster Senior Schools Cup quarter-final at Energia Park this afternoon.

Last year’s finalists Belvedere started with tempo, out-half Justin Leonard spreading the ball and sniping outside a narrowing defence. The confidence they showed backfired when coming left, where Donal Conroy showed a sniper’s instinct to pick off an intercept and go the whole way for Jack Doyle to convert in the third minute. Newbridge had to hold on, consolidate their advantage. They couldn’t manage it.

Belvedere cranked up the pressure when Leonard went for the corner instead of the posts from a penalty. The athleticism of Alekseiy Soroka saved a wayward lineout and the pack of forwards gathered around in support for a menacing maul, Andrew Synnott grounding out a try, converted by Leonard in the seventh minute.

Newbridge out-half Jack Hannon was the arrow in their next attack, Doyle looking to put Conroy around the outside. When that didn’t work out as planned, Doyle was given a shot at reclaiming the lead, the kick slipping left of the posts.

The pace of the game was relentless, Soroka bowling over defenders for the front-foot, forcing Conroy to come to the rescue on a bouncing ball from Leonard. They moved into position for the maul to get going again until the throw went awry.

This did not work as a deterrent, the forwards taking control of the ball to eat up the ground for Soroka to reach out for the bottom of the right posts, Leonard converting for 14-7 in the 24th minute.

The ‘Bridge openside, Conor McGroary prompted a penalty at the breakdown only for the lineout to be thwarted. They had to take most of the chances that came their way.

This was illustrated by how Belvedere moved up a gear, centre John Meagher veering infield, the forwards trucking it up and scrum-half Patrick Lysaght finishing the job for Leonard to convert for 21-7 right on half-time.

It was the Newbridge forwards Luke Rigney and Muiris Cleary and scrum-half Doyle that drove them on, captain Rigney using his power to rack up the meters made. They just didn’t quite have the polish to complete their approach work, Cahill held up near the line.

The penalties mounted for Belvedere as the saw little of the ball. They held their nerve, defended resolutely until the 55th minute when they broke upfield for Leonard to strike a penalty.

They rubbed salt into the wound when Conor Kelly crashed over from short range, Leonard converting for the fourth time. Leaving the final score at Energia Park, Belvedere College 31, Newbridge College 7.