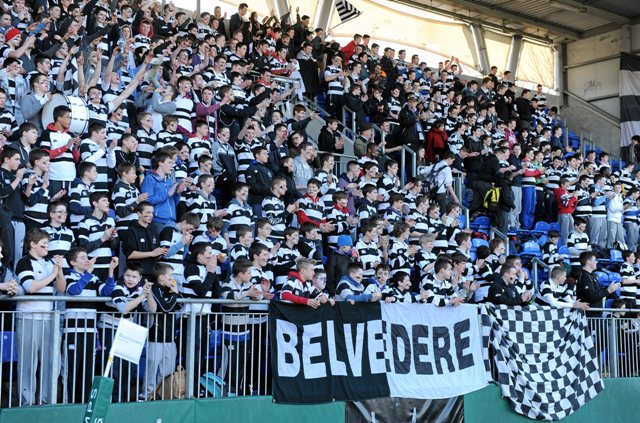 Belvedere overcame St. Michael’s in the Beauchamps Junior Cup Semi-final and will now face Blackrock in the Final in Tallaght Stadium…

Game, set and match for Belvedere. A fully deserved place in the final was earned in a magnificent victory last week against St. Michael’s – a 22-13 scoreline slightly flattering but Belvedere most certainly deserved a place in the final based on their previous two performances against Gonzaga College and Clongowes Wood.

A nervy opening by Belvo saw Michael’s piling on the pressure and Dylan Corrigan-Forbes missed the opportunity to put Belvo ahead from a penalty after just two minutes. The pressure kept coming from Michael’s but Belvo didn’t break. Resolute defending was impressive until a lapse in concentration gave Michael’s fly-half, Harry Byrne, the chance to score three points. He, like Corrigan-Forbes, missed from the tee and he was made to pay soon after.

A fantastic break from Belvo after a spell of defending sent number 15, Rory Clarke, in for the first score of the day, albeit against the run of play. Byrne responded with a penalty, but the halftime score had Belvo in front, by seven points to three.

When the teams emerged for the second half, both teams had good spells of attacking play. Against Clongowes, Belvo’s attacking proficiency came across quite clearly, but in the here against Michael’s, their defensive talents stood out.

Forbes and Byrne traded penalties before Belvedere put the game to bed. The backs put together a fantastic run of play, particularly winger Donnelly and eventually were rewarded when Clarke touched down again, converted by Forbes to make the score 17-6.

It wasn’t long before Belvo had another, with David Hawkshaw breaking away and sliding in the corner to drive Belvo out of sight, 22-6. Michael’s got a consolation try towards the end, but Belvedere are going to Tallaght to face Blackrock and deservedly so.