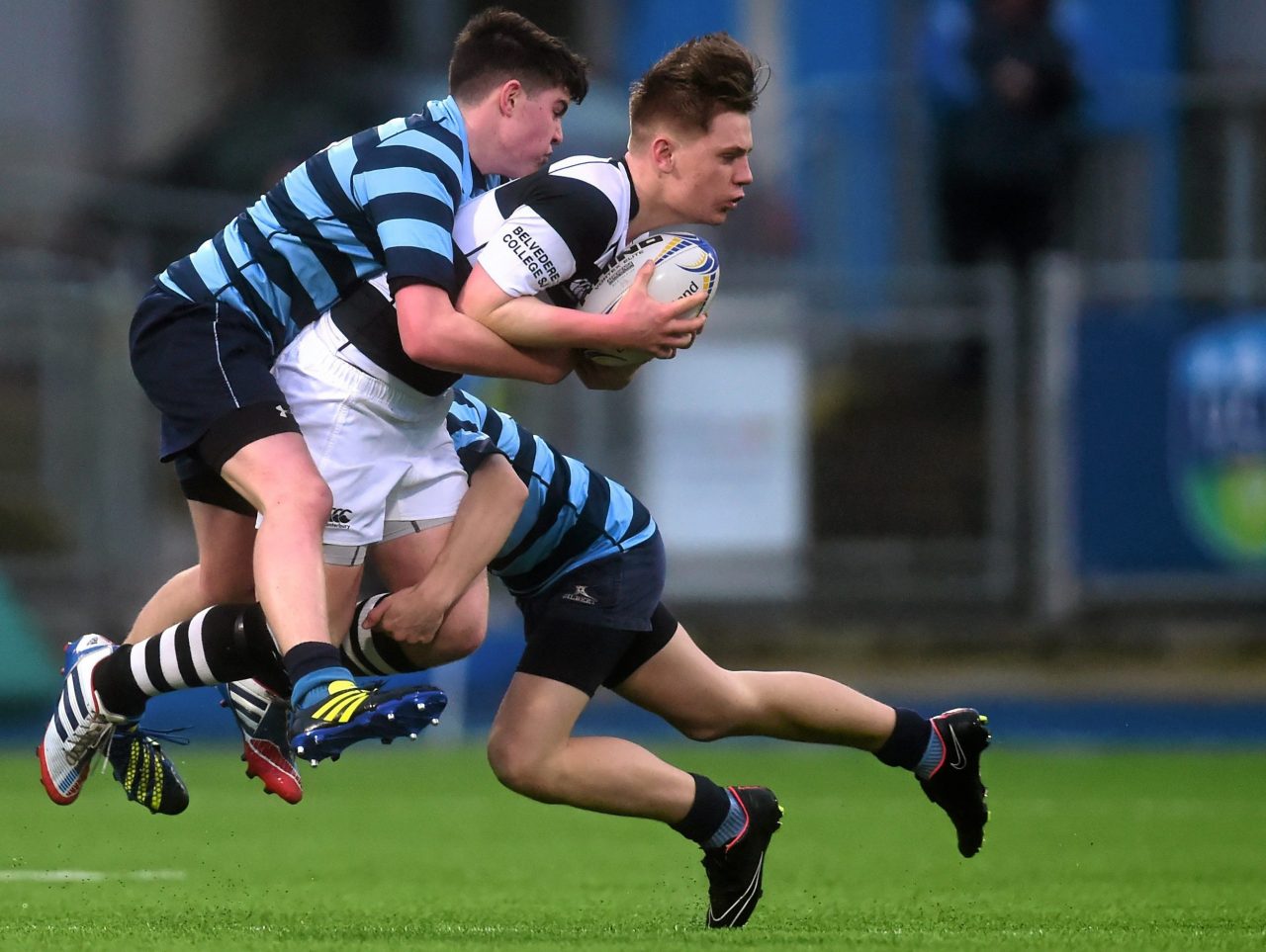 Centre Cailean Mulvaney was the trigger man in Belvedere shooting down Castleknock to make the Bank of Ireland Leinster Schools Junior Cup quarter-final at Donnybrook on Sunday.

Initially, Castleknock were better at catering to the wind and rain than Belvedere in the opening exchanges.

Fly-half Lennon Bracken used the elements to their benefit and they earned a penalty which Bracken nailed in the eight minute.

Belvo were negligent in their care of a ball at the rear of a ruck to hand back momentum.

This time, the ‘Knock backs sprung right and were denied a gilt-edged try-scoring opportunity by a blatant knock-on which went unseen with wing Matthew Moran free.

However, Belvedere prop Mateusz Galinski was binned to increase the pressure.

It wasn’t long before Bracken doubled the lead in the 15th minute when more than one defender strayed off side.

From the restart, Bracken looked for a gain of ground again. But, centre Cailean Mulvaney took the high ball in extraordinary fashion to set-up Belvedere’s first attack.

This provided instant confidence for out-half John Meagher to chance an outside break.

From a scrum, scrum-half Patrick Lysaght moved it to Meagher, who went again, before centre Adam Feely cracked the code for the first try of the game for 8-6 in the 23rd minute.

They were nearly further ahead when Bracken’s clearance under pressure was blocked, but not grounded before the dead ball line.

Bracken was withdrawn just ahead of half-time to take away ‘Knock’s primary playmaker.

Centre Adam Doherty moved to ten and showed authority in his actions, causing distress from the second-half kick-off.

There were shenanigans at a scrum that yielded a penalty and Doherty went to the corner. ‘Knock just couldn’t control the ball.

A break by Doherty and a hard line from prop Ben Mancini allied to hooker Elliot McMenamin’s growing influence put Castleknock on the front-foot.

The conditions were becoming a liability. This did not deter either side from playing positively.

Belvo’ stretched the lead to five from a side entry into a ruck when Mulvaney kicked a simple penalty in the 48th minute.

Then, Elliot McMenamin was yellow carded for illegal work at the breakdown just as his ‘Knock threatened to counter from the combined efforts of full-back Findlay Nairn and wing Moran.

The next score would be crucial and it came in exceptional circumstances.

Belvedere engineered the space left from textbook work from the forwards.

They were patient and purposeful in creating enough room on the short side for Mulvaney to dive in.

Not content with that, he landed the touchline conversion for 18-6 in the 53rd minute.

This was a bridge never likely to be bridged and Mulvaney made sure from his third penalty.