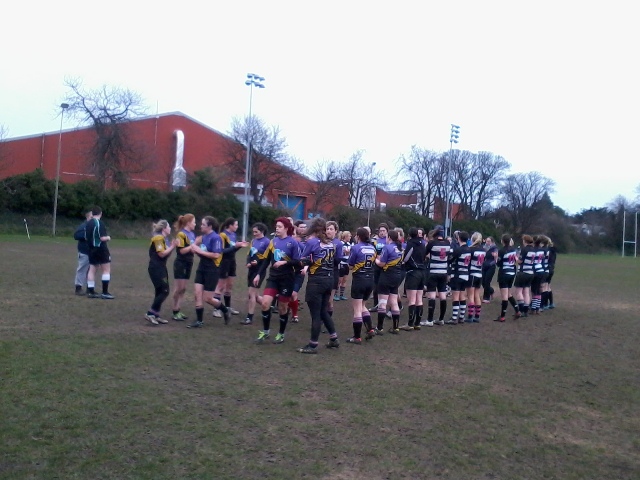 It was their first match since their loss to CYM in the final of the Development league in Edenderry so the girls had been training very hard to make sure they would get the win. Luckily that week they had spent a lot of time on defence as the Railway pack were doing great work to ensure they were gaining inches over the gain line.

The match started with a slight delay and thankfully it was a dry day so the pitches were in good condition. It was a tight affair at ruck time and scrum time but a super clearing kick led Kate Foley to kick the ball forward and using her speed made it over the try line for the first score of the afternoon. Amy O’Connor dutifully converted.

The game was a close encounter with both teams possessing some real speedsters in the back line and indeed the forward pack also. A penalty for off side led to flanker Aine McKenna using her significant power to get over the try line and again the conversion was made, even though it was at a particularly acute angle!

A super break by the Railway winger led to a chase up the pitch at high speed and luckily for Belvo, Amy was alert and made a great try saving tackle and a line out followed. Again, the defence from Railway was strong and held out however Belvo were making small gains at ruck time. A final try in the last 5 minutes of the game went to hard worker and all-rounder Alannah Fowley which was a great reward for her hard work on the pitch that day. And to top it off again the conversion was made leaving the score 21 nil.

Belvo now go forward to the next stage in the Paul Cusack Cup.